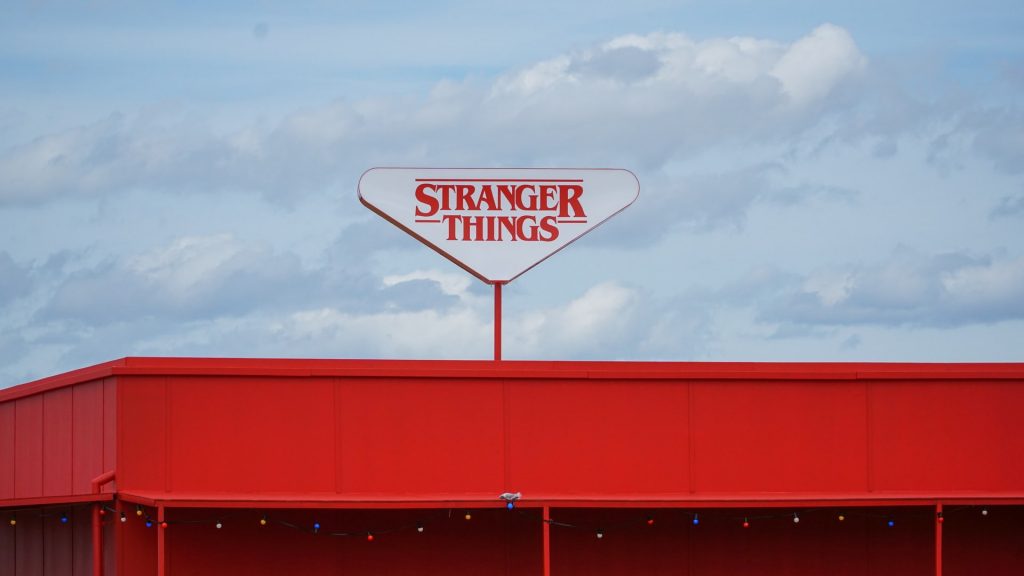 Hawkins, Indiana is a small American town where everyone knows everyone, a seemingly normal place to live at first glance. That is until Will Byers (Noah Schnapp) vanishes into thin air…

Set in November 1983 the plot of the first series follows the disappearance of Will Byers whilst on his way home from his friend Mike Wheeler’s (Finn Wolfhard) house after a day of playing Dungeons and Dragons in their basement along with other pals Dustin Henderson (Gaten Matarazzo) and Lucas Sinclair (Caleb Mclaughlin).

Upon discovering that Will is not in his bed the next day, his Mother Joyce (Winona Ryder) goes straight to Hawkins Chief of Police, Jim Hopper (David Harbour) with a desperate plea to find him. Hopper soon discovers that this case is little different to the usual day to day experience of a small-town cop.

Mike, Dustin and Lucas are surprised to discover that their friend has not arrived at school the next day and upon finding out that he is missing are determined to search for him themselves because he would do the same for them. But their search that evening leads them to even more questions when they bump into a mysterious little girl with a shaved head wearing what looks like a hospital gown (Millie Bobby Brown) Who is she? Where did she come from? And what is she doing wandering the woods in the rain? We soon discover there is more to this strange girl that meets the eye.

If you like a good mystery story combined with 80s nostalgia then Stranger Things is definitely worth your time. At eight 45-minute-long episodes it’s very well paced and definitely doesn’t out-stay its welcome on our screens. If you’re only planning to watch one episode tonight then be warned, every episode leaves you on a cliffhanger that makes turning off the TV a pretty difficult task.

It’s definitely worth the time of 80s nostalgia fans. If you take The Goonies and the X-files and mix them together you get Stranger Things, a very well-crafted mixture of Sci-Fi, Horror, Mystery and the 1980s. Even if you weren’t around three decades ago but have watched films and tv shows from that era you’ll still feel the nostalgia while watching.

The series is created by twin brothers Matt and Ross Duffer, their previous work includes some short films as well as the writing and co-producing of the Fox TV series Wayward Pines (2015). They do a fantastic job of keeping the sense of mystery going right until the end and bring three separate but connected plot lines together in the final episode for a conclusion that leaves you both satisfied and hungry for more answers at the same time. To find these answers, I highly recommend you move on to series 2 and 3 when you finish 1.

They are really good at keeping you engaged with the story whilst also putting the time into giving each character enough depth to make them likable and interesting, this isn’t an easy task when you’ve got such a big cast of characters.

The casting is what also makes Stranger Things a pleasure to view. The kids are all very good young actors and are all able to channel the unique personalities of their characters giving convincing performances. Millie Bobby Brown does a particularly good job at playing the mysterious girl; it’s obvious she has previous experience in a lead role having previously played a 9 year old girl possessed by a dead serial killer in the TV series Intruders (2014). Gaten Matarazzo also stands out with his crazy and energetic portrayal of the geeky Dustin, his previous experience is mainly on the stage with a part in the Broadway production of Les Misérables being an example.

The adult leads are also cast perfectly. Winona Ryder does a fantastic job as Joyce Byers, portraying a desperate mother trying to find her missing son. She steals every scene delivering every line with a mixture of desperation, panic and hysteria. Ryder rose to prominence in the 1980’s with roles in films such as Beetlejuice and Edward Scissorhands so it’s clear to see why she was chosen. She also pairs up well with David Harbour as Jim Hopper, there’s a convincing chemistry between the two that leaves you eagerly anticipating their next scene together. This is Harbour’s first main hero role having previously been known for mainly playing villainous characters and he does a great job, from his first scene you can clearly see that something is eating away at him, perhaps something from his past?

Stranger Things is aimed towards an adult/teenage audience with a 15 TV rating in the United Kingdom. The horror elements can be gruesome and creepy, there’s some jumpscares and blood but nothing too over the top. If older kids wish to watch then they can do so with the permission of their parents.

Overall if you’re stuck for something to watch at the moment then Stranger Things is the route to go down. With its superb opening series and a second and third series that more live up to the first you’re covered for quite a while. Happy viewing.