“Ooo Fwiend!” The Continued Success of The Inbetweeners 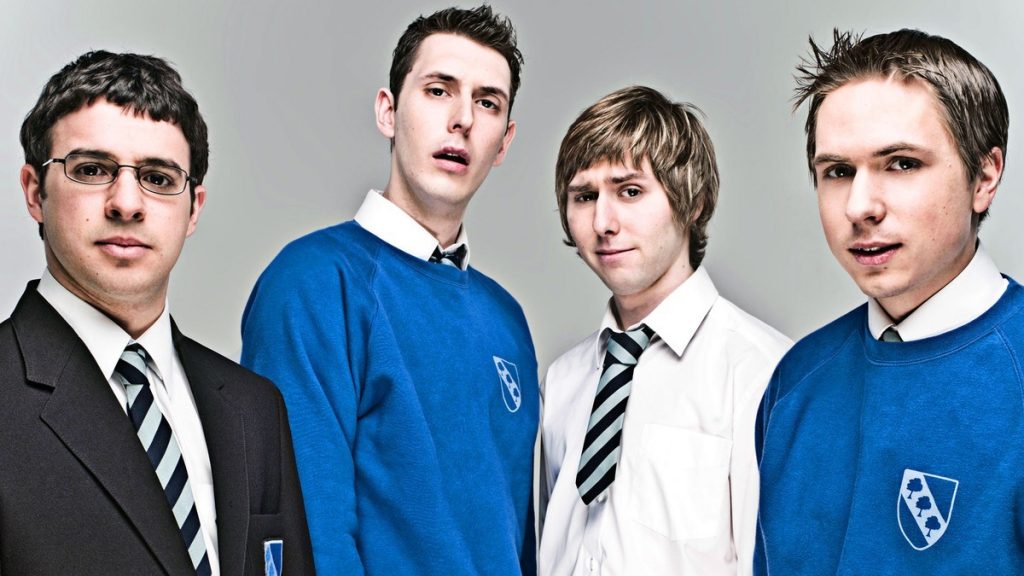 “You bumder!” ”Clunge.” “Bus wankers!” If you recognise these phrases, then you had a great childhood. This is likely because you grew up watching The Inbetweeners, and has led to a high degree of fame in social groups of teenagers and adults over time. But when the original Inbetweeners was released in 2008, even the creators couldn’t foresee the explosive impact the show would have.

After three short yet jam-packed series, The Inbetweeners Movie came out ten years ago to the day, and is still a critically acclaimed trailblazer for British comedy. (We’re discounting the sequel from this article because of its notable deviation from the source material and negative reviews). But what has contributed to its influencing power, and why is it still remembered so fondly ten years on?

What stands out is the brilliant choice of casting, not just for the main four but also the entire show. Will (Simon Bird) is the shortest of the main four and wears big glasses, adding to his uncool persona that he desperately tries to get rid of in the series. Also, Jay (James Buckley) is naturally very extroverted, and his brazen loudmouthed behaviour means he gets some of the funniest and most unbelievable lines.

The other side characters, particularly the parents, are well-rounded and also in the realm of believability when on screen. In the same vein there’s Mr Gilbert, fan favourite and portrayed by teacher-turned-comedian Greg Davies, who is an imposing terrifying teacher that dwarfs the height of the considerably smaller cast, and we can clearly see him channelling his previous teaching experience through a no-nonsense attitude.

On a personal level, there’s more to the series than just a well-crafted team. Ben, our entertainment go-to guy on the team, outlines its relatability for himself and a larger audience. “At school I was seen as Will, due to my glasses and generally being the poshest in a group of people that weren’t particularly posh. However, the repeated attempts to style my hair in a trendy way and failing miserably meant I was sometimes referred to as Simon, not ideal either way.” This adds to the whole show’s concept of what being an inbetweener is like: not quite the uncool crowd, but not the popular cliques either.

On the other end of the scale, Ruby’s school years weren’t as relatable to The Inbetweeners for a variety of reasons, but she still considers it to be one of her favourite comedies to watch now and then. “The hallmark of a good comedy is being able to make people laugh in a way that doesn’t exclude others from enjoying it. Whenever the four uncomfortable lads get into a cringy comeuppance at the end, they clearly deserve it because of their personal failings. This means the audience are directed to laugh AT them, not WITH them, making some of the more controversial and over the top scenes easier to enjoy.”

“Most people can remember their first kiss, their first car, their first fight, their first being thrown in a pond (or was that just me?), and watching The Inbetweeners go through the same things but on a more exaggerated scale means the audience find themselves thinking back on these moments in a more comedic light.” Ruby can relate by saying, after her first breakup, watching the scene where Jay gets dumped by a girl being so tragically hilarious is somewhat cathartic and can be helpful to people going through those heart-breaking phases to treat it less seriously.

Continuing, Ben relates tales of his awkward school experiences, like so many of us had as well. “Like many I knew a ‘Jay’, and I won’t name him. The lies he told were not quite as outrageous but blatantly not true, we all knew it. And there was always a Neil: not very bright but always seemed to have a smile and took things as they came without argument (although I can’t claim that he was a good dancer). As well as being able to relate to the characters I was also able to relate to the situations they found themselves in. Not being served in a pub is one I think we can all relate to but there are some that stand out in particular for me.”

“For example my Geography field trip in Year 11 wasn’t to Swanage, but I was told to carry out some surveys with members of the public, much like the ‘Field Trip’ episode. I have to admit I was tempted to ask some of the questions that Jay asked but the potential slap in the face wasn’t worth it. However, I didn’t end up trapped in a boat and I definitely don’t recall punching a fish.”

“When one of my mates passed his driving test it was a momentous occasion… then he rolled up in his new car. But in the same spirit as the famous four we embraced the endless possibilities that came with a car, even if it wasn’t quite a Ferrari. This included trips to places like Thorpe Park (except for me it was Drayton Manor), although we definitely didn’t accidentally drive into a funeral procession on the way.”  These are only a few examples of just one individual growing up in Britain’s schools, and likely overlaps with a lot of other experiences shared by the general population. Therefore a lot of nostalgia is preserved in the minds of an entire generation, which still lingers today.

Another aspect of how much nostalgia is generated by The Inbetweeners can be seen by how easy it is to talk about the show. Even to cursory viewers, mentioning an iconic scene like “Oooo fwiend!” naturally elicits some laughter and nodding from close friends with similar tastes in humour. It can then lead into full casual discussions about favourite scenes, quotes and even the aforementioned relatability from personal experience! Ben and Ruby can attest to that in just the creation of this article.

From a creative standpoint, the memorability of the Inbetweeners was cemented by its in-your-face attitude to comedy. In the way other great British comedies rely on wordplay and subtlety (e.g: Blackadder, Fawlty Towers), the setting was formulated to be more down to earth. There were several instances in the first episode alone where lots of over-the-top and crass behaviour is shown on screen for the purpose of comedy, but for the quorum of teenagers in between social standings it was almost like a rite of passage for every new experience.

This brand of humour is maintained all throughout the series and perhaps even peaks during the movie release. While a happy ending can be considered rare or out of character for a British comedy, this one neatly wraps up everything in a manner befitting the cast while not changing their personalities and flaws. After three whole series of things going from bad to worse, and then even more worse, it is quite satisfying to know that the turbulent times suffered by the boys can pay off, just like most people’s school years as they transition into a brighter adulthood.

So looking back on the ten years since we said goodbye to The Inbetweeners, the legacy still stands strong thanks to the unforgettable and irreplaceable episodes and cast. It’s safe to say that no part of the series has gone up in flames, and still brings a contented smile to an entire generation of once-awkward teens. With this level of fond remembrance for an iconic show, we look forward to ushering The Inbetweeners into the genre of classic British comedy for years to come.

Comedy inbetweeners uk comedy
Share. Facebook Twitter Pinterest LinkedIn Tumblr WhatsApp Email
Previous ArticleTransforming your Ideas into a Business, The 7 Step Guide
Next Article What you need to know to help you put together a Business Plan…