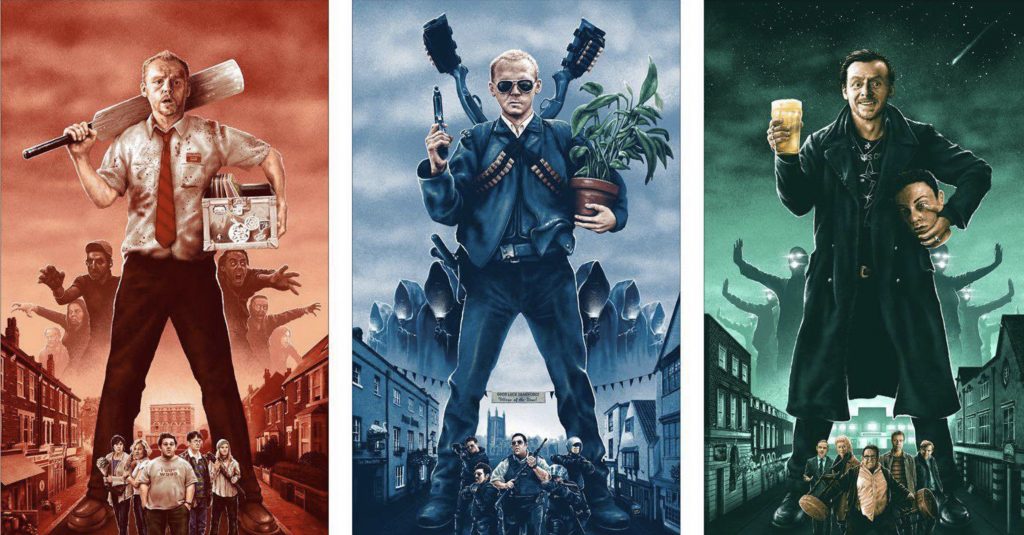 For the past eighteen months, we’ve been gagging for the chance to have a nice cold pint and wait for all this to blow over. In the interim, Ben and Ruby have indulged in a typical summer staple for Britons: Cornettos! This refers to the aptly named trilogy of movies directed by Edgar Wright and starring Simon Pegg and Nick Frost, using the different colours to reflect the theme of each movie. Since the trilogy is critically acclaimed and beloved by many, we’ll do our best not to spoil the storylines for any interested newcomers. If you really don’t want to take the risk, jog on!

Following on from their somewhat unexpected success with the cult classic sitcom Spaced, acclaimed director Edgar Wright had found the perfect duo to star in the first entry of what would become the Three Flavours Cornetto trilogy. The trilogy begins with Shaun of the Dead. The main character Shaun played by Simon Pegg, is a salesman who’s doing nothing with his life and is stuck living with his freeloader friend Ed, played by Nick Frost. His uneventful life suddenly changes when he finds himself single handedly fighting a zombie apocalypse not as a hero but to get his life back on track. Namely, to get his girlfriend and go down the pub.

Shaun of the Dead (whose title is parodying that of the famous gritty zombie horror ‘Dawn of the Dead’) manages to tell a very over-the-top story with large strokes of comedy throughout, yet retains a sense of purity for the subject content. Due to being the first of the three it had a noticeably smaller budget than its successors, but this contributes to the isolated and desperate setting. Little titbits like only being able to pay the extras a single pound coin added to the economical context of typical survival. It’s fair to say the story isn’t as sweet as strawberry but it retains the red/blood context envisioned by the creators and has indeed inspired many cosplayers to imitate the style in the following years. And for the next one in the series, it’s the boys in blue.

The second film is Hot Fuzz, a movie bringing style and action back to the British police force (Editor’s Note: Actually, we think the word ‘force’ is a bit too violent). This time Simon Pegg plays police sergeant Nicholas Angel who’s life is turned upside down when he is forced to transfer from London to the small village of Sandford in Gloucestershire. Leaving behind knife crime for the lovely neighbourhood watch, where everyone knows everyone just a little bit too much. This time Nick Frost plays his sidekick PC Danny Butterman, a bit of an idiot but with a big heart.

Hot Fuzz was intended to remove a lot of the humiliating tropes associated with British police, and it’s fair to say they achieved that! Many police officers and associated workers have repeatedly praised the film for its accurate depiction of police work in rural and urban environments, with the keynote being loads and loads of paperwork being filled out. This is portrayed through the use of montages, which also allows for excellent filmography and camera work that doesn’t overly rely on special effects.

Another beloved detail for film aficionados is the surprising number of British celebrity cameos. Cate Blanchett, Steve Coogan, Peter Jackson and even Edgar Wright himself manage very subtle appearances over the course of the film. Both Ruby and Ben consider this their favourite of the three, which isn’t to say the other two aren’t worth watching. By their own admission, World’s End is “the least best” when compared to the already iconic status of the two films that came before it.

The third and final eagerly awaited conclusion to the trilogy is The World’s End. Five friends return to their childhood town of Newton Haven to recreate a pub crawl they failed to complete after their final day of school. Simon Pegg plays the infamous Gary King, the self proclaimed ring leader of the group who doesn’t seem to have ever grown up like his friends and whose desperation to finally complete the pub crawl seems to have a deeper meaning. Nick Frost plays a very different role to his previous two. Andy is a sensible workaholic rather than an alcoholic; he has not been drinking since the “incident”. Andy along with other friends Oliver played by Martin Freeman, Peter played by Eddie Marsden and Steven played by Paddy Consadine embark on this seemingly normal pub crawl dubbed ‘The Golden Mile’, reluctantly at Gary’s request. Little did they know that his behaviour would be the least of their worries when the aliens arrive.

Many fans of Edgar Wright movies in general will attest to his constructive style when it comes to creating his films, and this trilogy is no different. There are plenty of rewatch bonuses present across all three films, varying from colour symbolism to dynamic foreshadowing wordplay and even minute details in the first half coming back like a comedy boomerang in the second half. One such example is the striking mention of the Winchester at the beginning, doubling as the name of the pub our “heroes” are in and the name of a famous historical rifle which is even mounted above the bar. Let’s just say that by the end of the film it comes back into play. Also do keep your eyes out for the pub signs in The World’s End; you may notice some oddly appropriate details…

Preserving their iconic status as classic British comedies is achieved through the pop-cultural osmosis of the impressive comedy sprinkled throughout. So many lines have reached the status of frequent usage in British slang and dialogue, from little in-jokes to fully quoted references down the pub (a fitting place, right?). It’s no wonder there have been plenty of awards and nominations won by the cast and creators of the Cornetto trilogy. Even though everyone involved has moved onto bigger and better things since then, the trilogy’s legacy will live on in the minds of many fans around the world be they on pub crawls or reliving cinematic nostalgia. And if you’re still waiting for all this to blow over, it might be an idea to watch all three films (in order if you want the best viewing experience) and see just what all the fuss is about.