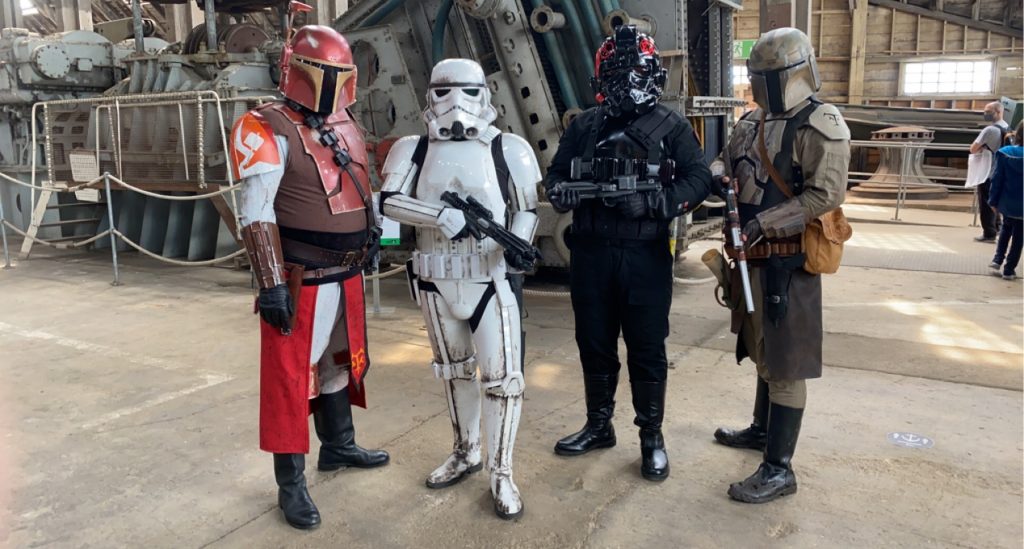 Rapture Gaming Festival wasn’t only an expo showing off new and retro content for the world to see, but also a chance for people to show off their own cosplay skills! Cosplay (short for “costume play”) is defined in the dictionary as “the activity or practice of dressing up as a character from a work of fiction (such as a comic book, video game, or television show)”, something that has rapidly been gaining attention over the past few decades. And at Rapture, it was clear everyone had brought their A game.

In cosplay, a good costume is as much about creativity with materials and construction as it is about the outcome. It’s all very well buying a store-bought outfit for a superhero, but taking it to the next level requires props, performance and style. You may not be the only one dressing up as your favourite video game character, so you need to make sure your design is faithful and eye-catching too!

Wandering around the festival between exciting stalls and expos meant there was no shortage of cosplayers to behold, ranging from anime to cartoons, superheroes, supervillains, video games and lots more besides! Everyone had clearly kept true to their vision of who they wanted to cosplay as, and the passion paid off immensely.

We spoke to several cosplayers and asked them for a brief interview. Elliz and Molly, cosplaying as Deku from My Hero Academia and a demon from the indie game Helltaker, were only too eager to stop and talk a bit about their creations. “I’m just here to have fun, cosplay, do what I normally do… It’s nice to come back out and cosplay in public!” The brilliance of cosplay is there are so many places to take inspiration from now; Molly’s design coming from a game she liked is the only credential needed, regardless of popularity. In fact, it’s a good way to boost the media you like to your friends with a dazzling cosplay that gets them asking the right questions.

Other striking examples came from the performance as well as the initial appearance. This dazzling couple appeared as a dual cosplay, featuring Joker from the Persona series and a radiant demoness. Delightfully gender-swapped as well, as a brilliant example of cosplay defying gender roles and expectations. No need to hold back on cosplaying a different gendered character; so long as it fits the festival rules anyone is welcome!

The highlight was naturally the cosplay awards, where crowds gathered to see the entrants posing and performing for the judge’s approval. Music cues, props and skits were all met with genuine applause, ranging from the dainty to the rough, the serious to the comical. Personal highlights included a re-creation of the Joker from Batman: The Animated Series with a clever piece of headgear, Umbrella Security Service from the Resident Evil games, Hatsune Miku, some adorable neko girls… the list goes on!

Just being at Rapture Gaming Festival had the NetworthPick Team conjuring up cosplay ideas for future conventions and festivals, so the creative vibe isn’t just limited to a few people. There’s plenty of examples and starter sites that can help newbies get started if you are interested. Just remember a few golden rules of cosplay:

Keep your eye out for future events, particularly if you are a cosplayer or are interested in starting. It’s a great personal journey of creativity and joy, as seen during only one day at the Rapture Gaming Festival. Be sure to keep an eye on NetworthPick too, and who knows? We may see you at the next gaming event in all your cosplaying glory!