DOCTOR WHO: SERIES 13 – What’s all the FLUX about? 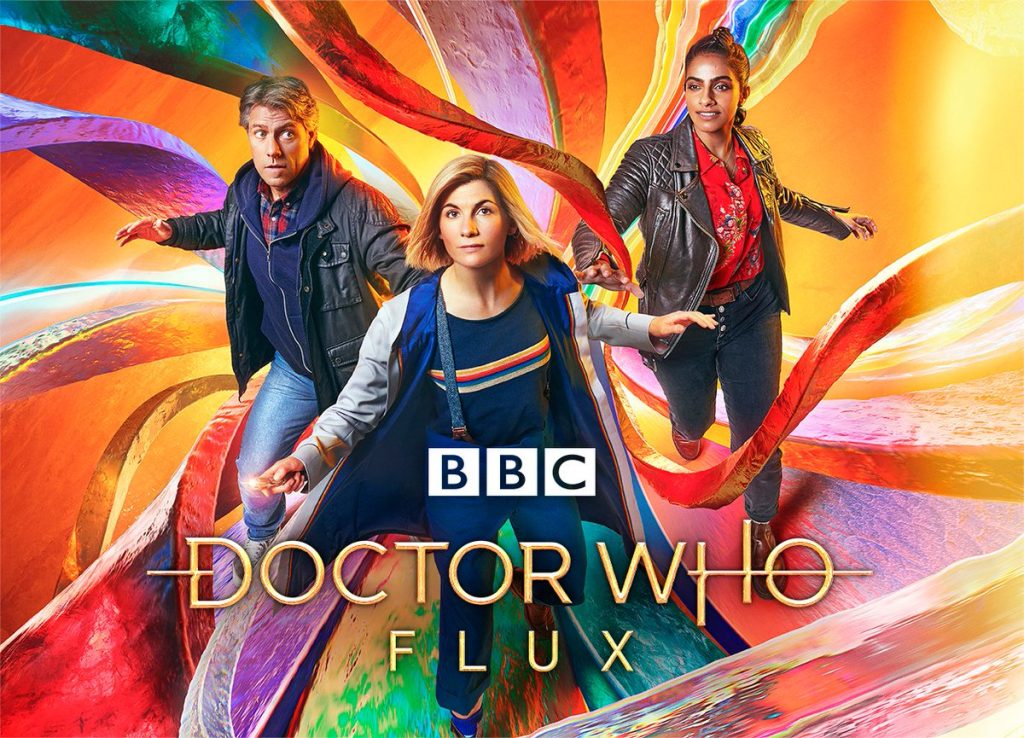 On the 31st October, Doctor Who returns Its the thirteenth season since its revival in 2005. But aside from a new companion, what else do we know about this year’s series of Doctor Who? Allow me to talk you through what we’ve been given so far leading up to the premiere of Doctor Who: Flux.

That’s right! In series 13, John Bishop joins the show as Tardis companion Dan, who was last seen loading a van full of tools when he was announced back on New Year’s Day. You’ve likely seen his face on promotional material already, (such as the image shown above) but what do we know about Dan himself?

Well, first of all, we know he’s from Liverpool. This was confirmed by John Bishop on the Graham Norton show after the actor and comedian apparently let the information slip on an online drama workshop. (Yes, Doctor Who fans are extremely resourceful when it comes to finding new information.) We also found out his full name; Dan Lewis; at Comic-Con back in July. So far, we know his name, his face and where he is from, so we’ve covered enough to find him on Facebook at least, but his personality and history remain to be seen. (As well as his reaction to the Tardis being bigger on the inside because let’s be honest, we all love that bit.) One thing is certain though, with careers in football, stand-up comedy and acting; having starred in Dramas such as E4’s Skins in 2010 and Accused on BBC one in 2012, it is clear Bishop has the skills to do all the drama, banter and running required to keep up with The Doctor.

Fun fact: John Bishop was initially unable to audition for the role when offered as the filming clashed with a Live tour he had already committed to, but then the Pandemic caused both schedules to change.

It was also revealed at Comic-Con that the series this year will only be six episodes long, all of which will be linked together as part of one large story. Along with this announcement, the first guest character for series 13 was announced: Jacob Anderson (best known as Grey Worm in HBO’s Game Of Thrones) as ‘Vinder’!

Then, at the beginning of October the tight-lipped BBC opened the floodgates with some rather Unique advertising…

“Can you Hear me?”: teaser trailers begin!

Advertising began on the 2nd of October with short snippets of glitched video appearing on BBC one throughout the following week. Then on the 6th of October, the official Doctor Who Magazine revealed some promotional images of a Sontaran Battleship above the Liverpool docks. All this came alongside the emergence of quickly broadcast glitches on billboards across the country.

Then, as part of the advertising for the series, on the 8th of October a short clip of the Doctor asking, “Can you hear me?” was released, followed by the disappearance of not just the Doctor Who website, but the official Facebook, Instagram, Twitter pages as well. The Doctor Who website showed only an error message, and the same phrase “can you hear me?” I think this was a fantastic way to tease fans anticipating a release date for the next season by catching their attention while saying nothing at all. In fact, removing a lot of what was said already temporarily, captivating fans attention until the pages returned with a new announcement.

And return they did! On the 9th of October the pages returned closely followed by the release of a teaser trailer across all platforms, promising the series would contain an event like no other, the mysterious ‘Flux’! Chock full of fan favourite aliens, confirmed by the Doctor herself in a message to all mankind:

With this initial trailer, the BBC Confirmed the return of fan favourite Monsters the Sontarans and the Weeping Angels, along with alluding to the introduction of a new race called ‘The Ravagers’!

Alongside this teaser trailer, it was announced that Series 13 would premiere at the end of October and would go under the name ‘Doctor Who: FLUX.’ Throwing away the plain title of Season thirteen and adopting the title of the overall story like the Doctor Who serials of old. “The flux is coming” and I doubt we’ll know much more about it until it does, but as a long-term fan of the show, I am certainly excited to see what The Flux has in store. If the creative team were as creative as the advertising team when they wrote the Flux storyline it’s safe to say we are in for one hell of a season!

It was also announced at the beginning of October that next year in 2022 there would be no new season of the show, instead a trilogy of specials would be released to bid farewell to both Jodie Whittaker as the thirteenth Doctor and current showrunner Chris Chibnall as well as tide us over into series 14 and the return of Russel T Davies as showrunner in 2023. That’s right! Russel T. Davies is returning to the show after leaving with David Tennant in 2009 after a year of specials much like the one that now hails his return.

Unfortunately, the lack of a series in 2022 is due to the filming difficulties caused by the pandemic, but it’s clear that despite this fans of the show still have a lot to look forward to in the coming years, especially if all Flux lives up to the expectation it has so fantastically set so far!

On the 16th of October, the final full-length trailer came! (As I was in the middle of writing this article in fact.)

More action, more mysteries and more aliens! Such as the dog-like Karvanista, who I’ve already seen referred to online as ‘Who-bacca’, in reference to the beloved hairy Star Wars character. But most prominent are the Swarming clouds and the group of yet unknown crystal-lined aliens. Could one of these entities be the Ravagers mentioned in the teaser trailer? Or even the flux itself? Along with these, a further set of recurring aliens, this time the Cybermen and the Ood, as well as a first look at Jacob Anderson as Vinder in action!

Many guest stars were revealed for the series alongside this trailer, perhaps most exciting to me is Sara Powell playing Mary Seacole, the famous British-Jamaican battlefield nurse of the Crimean war, placing the episode somewhere in the 1850’s and continuing Doctor Who’s tradition of heroes from history joining the doctor in their mission to save the universe. I’m excited to see more of the open field battle between the Sontarans and the British redcoats of the 1800’s. With varied guest stars shown in various period-specific outfits, the trailer hints at a variety of time periods within the six-part story, all tied together by the mysterious event known only as the Flux.

The first episode of Doctor Who; Flux will air on Sunday the 31st at 18.30 on BBC 1. Until then, don’t forget to keep an eye on the entertainment section to see what else has been attracting audience attention in our post lockdown world!

Thanks for reading, and I hope you’re as excited to watch as I am!