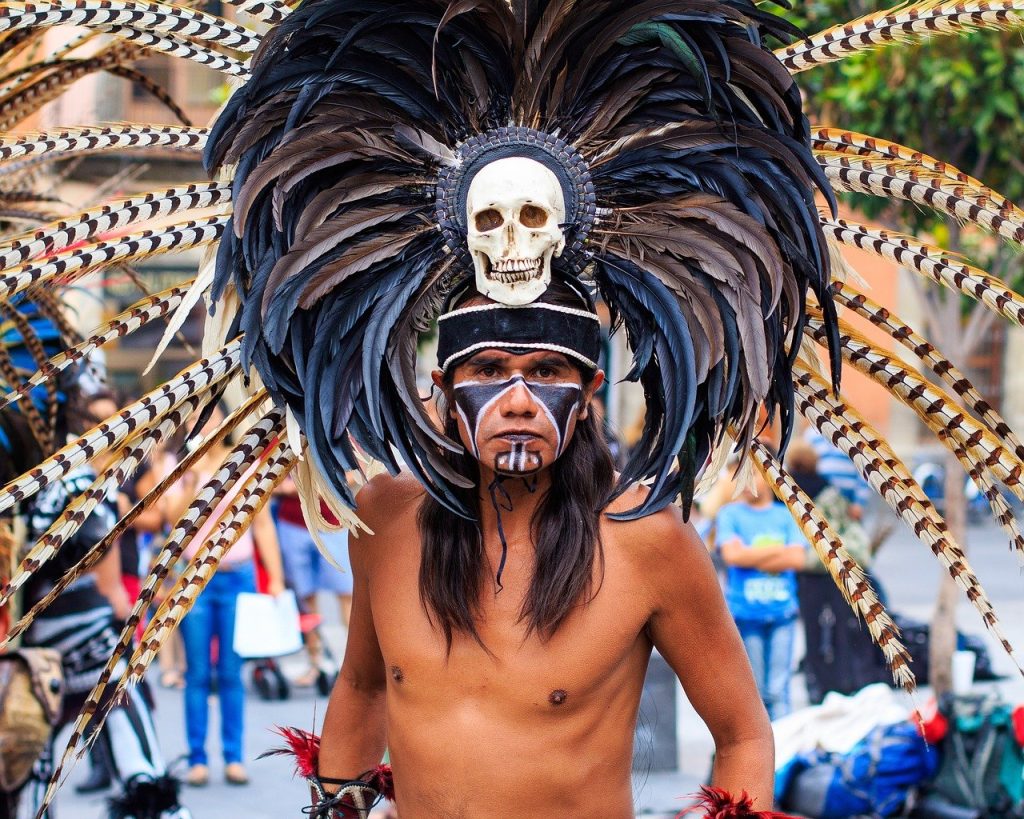 Modern-day Mexico has been fuelled by classical guitars and mariachi bands. Distinctly recognisable by its flamenco-style strumming and the heavy use of brass (let’s not forget vocal belting either)!

But what was the music of Mexico like before Spanish colonisation in the 16th century? Well, let’s start with a little bit of history. Mexico was called Anuhuac (which means land surrounded by water) by the Aztecs, the Indigenous tribe that ruled Mexico before the Spanish.

Music was so fundamental to Aztec culture as they would use it alongside dances in rituals to their gods. Music and dance were considered a suitable, sacrificial gift to their gods and would be common practice in day-to-day lives, for commoners and nobles alike.

However, Pre-Hispanic Mexican music is completely different in comparison to modern-day Mexico. For starters, the Aztecs did not use guitars, or any string instruments for that matter! It was solely percussion and wind instruments. The most popular included clay flutes, ocarinas, conch shells, rattles, shakers and a variety of drums.

The most important drum was the Huehuetl (pronounced wey-wey-t). It was an upright drum made from tree trunks, therefore coming in a variety of sizes. They were hollowed out and stood on three legs, the skin on top was typically made from ocelot. Carvings of warriors or different animals were also depicted on the side of the drum. Huehuetl drums were used during festivals as well as rituals and were played by the elders of each tribe. They could only produce two notes, a low or high note.

Unlike western instruments at the time, Aztec instruments were limited to a few sounds as they could only produce the notes in a diatonic scale; the Tonic (first note in a scale), second, third, fifth and sixth. They were ignorant to the fourth and seventh notes in the scales known to us and because of this, they could only play pentatonic or tetratonic (four note) scales.

Do not let their lack of dynamics bore you! The Aztecs were able to create beautiful music, despite being stunted by the limited resources in their surroundings.

5 Tips on how to recreate your own Pre-Hispanic music using LogicProX:

Obviously, most of us aren’t going to have access to conch shells, clay flutes or primitive Mexican tribal drums. However, you can still recreate authentic-sounding music without them.

Use the right drums!

Drums were the most fundamental part of Aztec music as they were the main source of rhythm. Although their drums were simply made from wood and skin, they have  very distinctive tones. Unless you have access to a huehuetl yourself you are going to have to use replacements. I personally use Composer Cloud’s EastWest sound library, where I pay a monthly subscription to gain access to a variety of instrument VSTs. However, often DAW’s like LogicProX, Cubase, Garage Band, Nuendo etc. have free, virtual drum kits at your disposal.

You will want to use a Latin drum kit or something similar to closely represent the tone of Aztec drums. Above is LogicProX’s free sample library. If you click on the ‘world’ tab and navigate through ‘percussion’, you will find a Latin kit. Go through each note and try to find two tones (low and high) that work well together. Use only those two tones because other instruments will bulk out your percussion section.

There is a sixteenth-century book containing poems and songs called Cantares Mexicanos, which includes ancient Mexican drumming patterns that you can refer to.

Within this Latin kit, you will also be able to find a variety of rattles and shakers that are perfect for you to use.

Include musical rumbles when you’re writing!

The word rumble typically refers to a deep and continuous sound, just like when we hear thunder. However, a rumble in musical terms basically refers to a passage in your track where you’re, essentially, freestyling (think of it as the bridge of a song). Often this meant the Aztecs would rapidly play their percussion in unison or change up the instrumentation itself.

In this audio, you can hear passages in the music where the musicians speed up then slow down. The speeding up of the drums and shakers is considered a rumble.

This is easily done by adding more drum hits in each bar when writing and/or adjusting the tempo in your DAW.

In LogicProX on your main window, to the top left you will see an arrow. If you click it, it turns blue and will drop down a variety of tools you can use to edit your audio. If ‘Tempo’ does not appear straight away, right-click and choose option ‘show tempo’ and then you will be able to see it. Use this tool to create effective rumbles!

Avoid String Instruments! What instruments should you use?

Just imagine you are from Pre-hispanic Mexico, you’ve never even heard of a guitar before! Authentic Aztec music should not include string instruments such as cellos, violins, fiddles, guitars etc. Pianos were not used either. Stick to using vocals, wind and percussion instruments only. Not often can you find clay flute samples on VST’s and if you do, you’d probably have to pay for it. however, a good substitute would be wooden flutes.

Once again, if you search the free music library that comes with Logic you have access to a Native American flute that gives you near enough the same sound (as much as free VSTs can give you anyway!). Ocarinas and conch shells can be a touch out of reach in terms of sound libraries so try adding in some brass instead. This way you can bulk out your track, avoiding string instruments whilst applying a modern flair. Through using brass such as tubas, french horns, trombones, you create a greater dynamic range as well.

What scales should you use?

Western music is commonly written using seven-note scales like C major, G major, A minor, but you will want to use five or four-note scales, known as pentatonic or tetratonic.

but you will want to use five or four note scales, known as pentatonic or tetratonic. You can turn any scale into a pentatonic by only using the first, second, third, fifth and sixth notes in that scale. You can use any four notes for a tetratonic scale as long as you avoid the fourth and seventh notes!

Writing the melody is completely down to your own creative freedom, so if you apply these tips, you will be successful!

EQ or equalisation is so important when producing music. An equalizer allows you to isolate certain frequencies and through this, you boost or lower them. Essentially you use it to balance the different frequency levels in your music. For example, Aztec music consists mainly of drums and flutes which are full of either low or high frequencies. Using your EQ, you can then optimize each instrument to make sure they are not muddying up your track, boosting the middle frequencies and/ or dropping the mid/high frequencies.

During my final year of university I created my own Pre-Hispnic Mexican music which you can listen to on Soundcloud. I took advantage of my education in film music and created a soundtrack called The Spirit Guide.

A Guide To World Music mexico music
Share. Facebook Twitter Pinterest LinkedIn Tumblr WhatsApp Email
Previous ArticleUpcoming Fashion Events for 2021/2022 and How to Get Into Them!
Next Article 2021 Autumn Budget, what it really means for YOUR business.