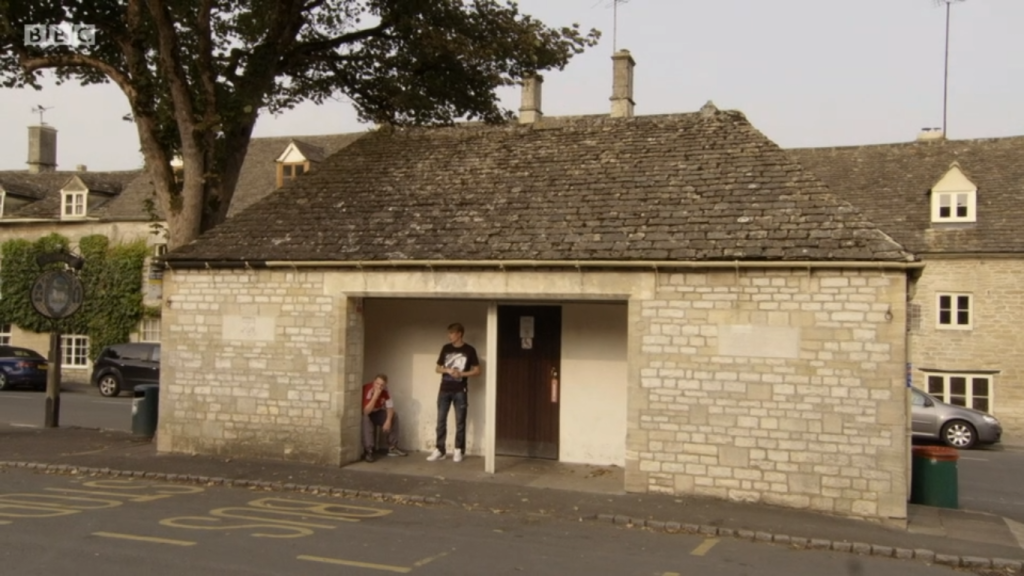 “Even Jesus wasn’t perfect… He was really into prostitutes.”

BBC comedy isn’t a genre I find myself paying attention to. Similar to the way that Channel 4-released dramas tend to find themselves dated and irrelevant very quickly, I’ve always found that sitcoms and comedy shows from the UK state broadcaster struggle to have a unique selling point, or even raise a consistent laugh (comedian Josh Widdicombe’s show Josh comes to mind). However, just as Channel 4 recently had an international hit with acclaimed writer Russell T. Davies’ It’s a Sin (2021), BBC Three had their own spark with This Country (2017-20).

Created by and starring siblings Daisy May Cooper (Taskmaster, Avenue 5) and Charlie Cooper (Greed), This Country follows the Mucklowe cousins, immature 20-somethings Kerry and Kurtan, as they navigate their lives in a rural Gloucestershire town. ‘The Vicar’, Reverend Seaton (Paul Chahidi, The Death of Stalin), the meek and mild priest at the village church, attempts to guide the pair towards maturity and ambition outside of their small hometown.

There’s a range of ‘colourful’ characters within the show that, at least for myself having grown up in small-town England, feel incredibly well-realised to the extent that they’re clearly based on real-life individuals. Personally, I’ve definitely known a Big Mandy or two, the borderline-sociopathic local woman with a string of violent offenses who still considers the Mucklowe cousins as close friends.

The comedy satirises small-town life, where everyone knows everyone (and everyone hates everyone), where personal drama is viewed as world-ending and there’s always someone hanging near the bus stop believing they’re a gang leader. There’s Kerry’s mum, never seen on-screen but always heard shouting at her daughter in a heavy smoker’s rasp from her bedroom. Kerry’s father, Martin Mucklowe (Paul Cooper), makes occasional appearances, if only to skive off his parental duties or encourage the cousins to do dirty work for his low-level illicit business activities, such as storing hundreds of stolen vacuum cleaners in their rental garage.

Kerry is consistently deluded that her father cares for her, a man who himself states he has “no empathy” and claims to have played pool with Gloucestershire-based serial killer Fred West (calling him a “top-notch bloke”). That’s not all she’s deluded about, though; Kerry often believes herself a type of Cotswolds crime boss, saying “I’ve got enemies in South Cerney, I’ve got enemies in North Cerney. I’ve got enemies in Cerney Wick.” When Kerry’s house is ‘plummed’ by local schoolkids, she treats it as an example of the “target on [her] back” that she’s had since birth. Kurtan, nicknamed for his signature hairstyle, has attention and anger issues – it doesn’t take him more than the runtime of the first episode to start a fire at a village fête.

“The Devil doesn’t come in a cloak and pointy horns. He wears knitwear and drives a Golf.”

Everyone speaks in a thick West Country accent, and while the satire is based around the strange people and ways of life often found in small towns, there is a political aspect to much of the show. After over a decade of austerity and national budget cuts in the UK, affecting healthcare, education, and community funding, This Country is set amongst the backdrop of deindustrialisation and borderline poverty (keep it light, guys). Kerry and Kurtan have almost no prospects, nor any realistic ambitions, as these days there are scant opportunities for young people in the United Kingdom who don’t find themselves living in cities. The show, framed as a BBC documentary investigating the lives of people often forgotten about, will usually have plot-relevant statistics noting the real-world impact of the subject matter.

As the show progresses over three series and a special, we’re told the Cooper’s humorous takes on religion, family loyalty and community spirit. That’s not to say This Country finds itself soapboxing at all, as we are more often shown the human impacts these cuts have had. In one episode, Kurtan, with the help of The Vicar, has (miraculously) been accepted into Swindon College for a health and social care GNVC, which would involve moving away. He struggles with the idea of leaving the slow pace of life he has been accustomed to his entire life and eventually gives up his place to stay at home.

Daisy May and Charlie Cooper, as well as Paul Chahidi, give hilarious and heart-warming performances. Some of the best comic performances are the ones that can get a laugh without being unbelievable, that can maintain the idea that their character is a real person, or at least an indication of a real person. There’s a phenomenon in sitcom writing known as flanderization – when a comedy character slowly becomes more exaggerated, their antics and views gradually increase in intensity in response to the audience growing familiar with them. Kerry and Kurtan, though, retain much of their humanity and believability throughout; their childlike vision of the world and their inflated sense of right and wrong never falter. While they were caricatures of rural young people from the start, the writing never ventures into farce and remains staunchly committed to its hilariously honest portrayal of small-town life.

Daisy May Cooper has said that “all the material is based around stuff that happens in Cirencester [in Gloucestershire]”, and the genuine lived experience of the siblings from spending their childhoods and portions of their adult lives on location in consistently made clear. The protagonists’ delusions are just that – delusions – and their failures are as saddening for the audience as they are for the characters, though they never find them as funny as we do. The three-time BAFTA-winning cult show was a huge success for BBC Three, but more so for the stars themselves – the Cooper siblings have said that their childhood was “financially so dysfunctional” and their money struggles continued into adulthood until This Country was greenlit, and I for one am incredibly grateful they were given the opportunity.

“Kurtan still has a grudge against Tesco for the whole horsemeat thing.”

This Country is available to stream in the UK on BBC iPlayer.