Dungeons and Dragons: A love letter to my favourite hobby! 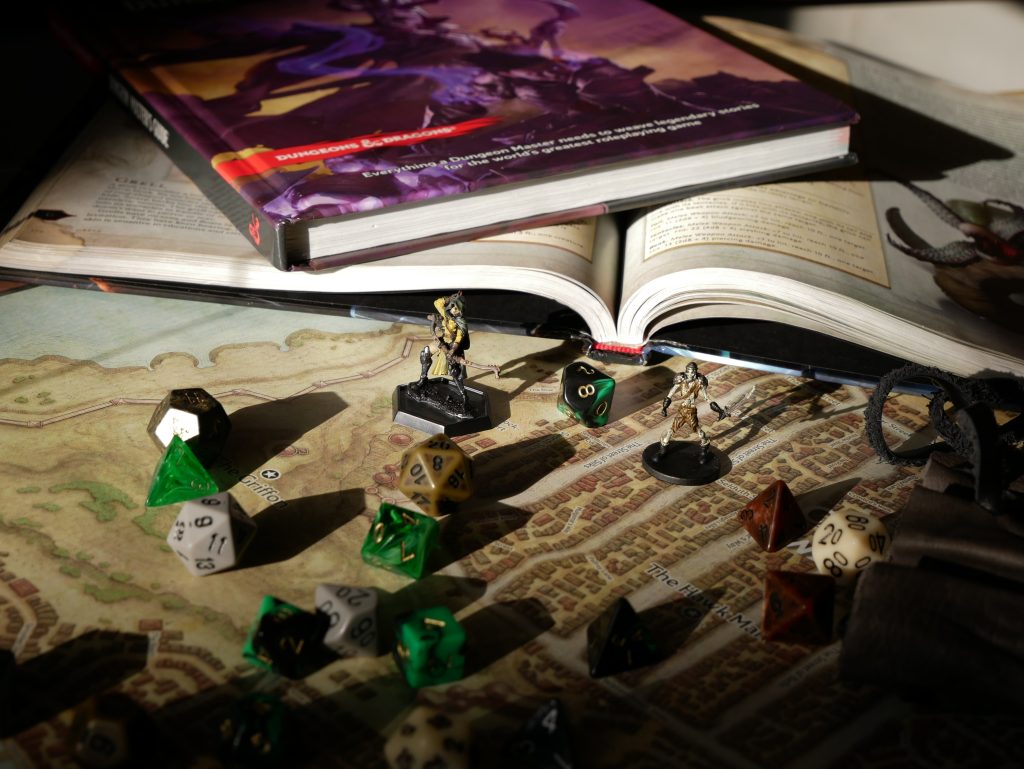 For those who don’t know, Dungeons and Dragons; also known as D&D or “that game the kids in Stranger Things play”; is a tabletop roleplaying game in which players create their own unique characters and explore and survive in a world their Dungeon Master creates. The Dungeon Master is another player who acts as a narrator and referee almost, filling out the world for the other players and deciding whether each action of the players succeeds or fails by setting the value of the dice roll needed for success. And from there the game allows players to do pretty much anything they can imagine, such as jumping out of a crashing airship while on horseback or escaping capture by beating your enemies into unconsciousness with the very chair they’ve tied you to. (both things I have witnessed in game. And yes, the horse was fine.)

Over the last three years I have been enthralled by the adaptability of this game to rise up and meet the absurdity of the imagination and tailor itself for the near infinite situations players can create! And since I have been given the chance to write about it, I thought I’d use it to share my experiences with my favourite roleplaying game!

How I began playing:

I can’t honestly remember what it was specifically that piqued my interest in the game. But it was the idea of immersive storytelling that drew me in. I think I was around twelve when I first tried to play, with only a basic idea of the premise and no access to the actual rules. An experience I still cringe about to this day… However it wasn’t until the beginning of University when I finally started playing myself. And I can honestly say the addiction was instant.

The game’s ease of access meant that I could create my character and learn the basic rules easily with a few cursory google searches. And after buying a set of dice, I was playing at least once a week in the university library. I’d honestly say the hardest part is finding people to play with, (especially during freshers’ week when no one knew anyone.) but you’d be surprised how many players this game has. Very quickly I was meeting new people and indulging in worlds of fantasy to my heart’s content.

Despite the less than stellar stereotypes of the tabletop community, it is an extremely communal game, with a strong encouragement for teamwork and interaction. And just like any other game or hobby, it attracts all types. A fact I only mention to encourage those who worry about how people would see them if they started playing. Who cares? Don’t let other people decide your interests. You do you. The game is also a great reason to meet up with friends you otherwise wouldn’t have the time to catch up with. Having just graduated and spending most of my time getting my adult life up and running, it’s nice to have a scheduled game every week or two to catch up with people where otherwise you couldn’t find the time.

The impact of the game:

For me personally the game helped with character practice as I was studying Drama at the time. It was a great opportunity to experiment with and play characters I’d otherwise never get the chance to play. It was also a great way to practice improvisation training (to put it lightly) as very often you’d have to stay in character as your best laid plans would go up in flames from a failed roll or a stupid thing one of your fellow party members would say.

I also feel that the game helped me grow as a writer. I became more confident as I could see whenever people liked my ideas. I remember the elation I felt when I first took on the roll of dungeon master and managed to immerse the party in my world. My players were interested in the world I had created! And I’d be lying if I said that didn’t make me proud. Reacting to your players actions was also a fascinating experience, as you would need to know how the situation they were in would be changed by their actions.

And finally, D&D got me used to writing every day, either by writing character notes and ideas, or planning the next session as Dungeon master! This is something I am extremely grateful for now that I’m writing for a living! It encouraged me to become more openly creative. More open in general! I suppose I had always been secretly embarrassed sharing my ideas. Like that feeling you get when you’re sat in a classroom and you know the answer but don’t give it because you fear the attention, or getting it wrong when you know you’re right. It helped me to strengthen my conviction in my creative writing skills and for that I am grateful.

Probably most importantly for me however, during the pandemic online resources like ‘Roll 20’ and ‘D&D Beyond’ meant I was able to continue to play online for free. This helped me continue socialising while the world had stopped. As such, I didn’t feel quite as isolated. Which helped soften the blow of lockdown when it stuck in the middle of my second year at university. The games I got to play offered escapism when I needed it, as well as something to look forward to in a time when nothing else was able to happen! Honestly, I can’t say how I would’ve survived lockdown without the social interactions D&D allowed me to have at the times I felt most alone.

Now that I’ve finished university, I can’t see myself ever dropping D&D entirely. Granted sometimes life just changes and I probably won’t play it as often as I did then, but I will always be grateful for the surprising impact it has had on my life. And I will say to everyone reading this: never be afraid to do what you love. To learn from your hobbies about what you love doing and transfer those skills. And its ok to love a game because our pastimes and hobbies are a part of our lives and a part of what makes us, us.

So I say thank you D&D for the weirdly powerful impact you’ve had on my life over the past three years, and as always, Thank you for reading!

Let us know how your hobby has helped you over on NetworthPick’s social media!