A Guide To World Music: The Andes 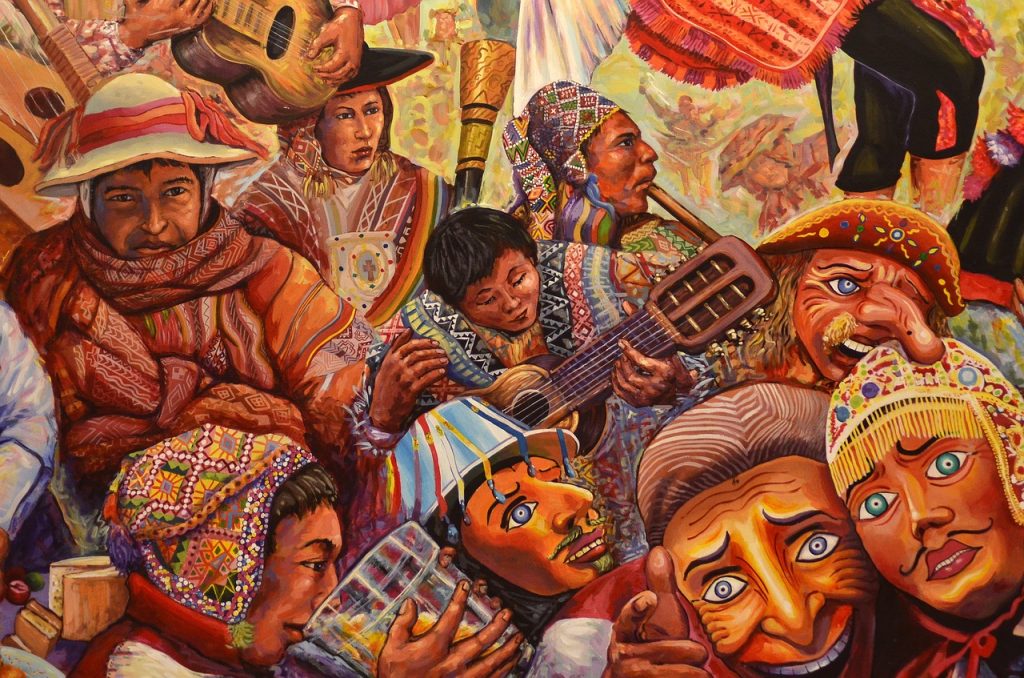 Peru was home to one of the oldest indigenous tribes in the world – the Norte Chico Civilization – and was the largest state during Pre-Columbian South America.

There is a common thread in all these countries that tie them together; their ancestors’ music.

The enchanting sounds of bamboo flutes and panpipes have been engraved into their culture for hundreds of years, even before the reign of the Incan Empire during the 15th to 16th century.

Music was sacred during this time as it was a powerful tool to connect people to the divine world, which helped Andean tribes communicate with their gods. Music was associated with religious and agricultural rituals and even wars.

Dance, music, and singing were all closely interconnected therefore, with one word used to describe all three – taqui.

During the 16th century, when Europeans discovered America’s existence, they were mortified by not just Incan music and dance, but by all the indigenous tribes’ musical traditions. The Spanish believed them to be hellish, pagan rituals and of course, Spanish royalty, during that time, hated anything that wasn’t Catholic. It even got so bad that members of the Spanish clergy prohibited anyone from playing Andean flutes and music was replaced by western, Catholic traditions.

The Andes, however, managed to save Pre-Columbian music from dispersing entirely under the Spanish, due to inaccessible land. The Andean states are home to one of the longest mountain ranges in the world, causing the area to be encompassed by glaciers, volcanos, grassland, deserts, lakes and forests.

All these different terrains caused traditional Andean music to survive, untouched in remote pockets. Essentially, this saved their musical traditions from Catholic conversion.

Having said this, the Andean music we know today is a hybrid between Spanish and Incan influences.

Spaniards brought their Moorish and Gypsy inspired music, instrumentation and their language with them to the Americas which created a new, unique kind of Andean folk music.

The Panpipes, known locally as Siku, are the most well-known wind instruments of Peru.

There are two different types of panpipe: one of which consists of two rows of pipes (the Zampñoa) and the other sports a single row of pipes (the Rondador).

Traditionally they are made out of a light reed called Songo that grows on the banks of Lake Titicaca. The pipes are held together by a string woven and tied around the top of them. However, most Siku are made from bamboo nowadays.
Modern panpipes offer full-scale playability however, traditional models only play a partial scale so that two or more musicians were needed to play a tune, using a hocketing technique. They are believed to be created that way due to the high altitudes the natives lived in. The air was so thin that the Andeans could potentially hyperventilate by playing wind instruments, so the tune was split between two or more people.

The Quena is the oldest known wind instrument in the continent to date.

Unlike the panpipes where they are only open on one end, the Quena is open on both ends with seven finger holes (six on the front, one on the back).

It plays basically the same as a modern-day recorder and has an extremely wide range of sound.

The Pututu was a trumpet made from either a conch shell or a cow’s horn.

This instrument was not normally used for musical purposes but was used to communicate important arrivals or religious ceremonies.

They come in a variety of sizes (depending on the size of the shell or horn) and can only play one note. Again, this note will vary depending on its size.

The Bombo (first image) is a large wooden drum, crafted and hollowed out from a tree trunk. The skin on top is usually that of sheep or llama and the skin on the bottom is leather from cows.

Wancaras (second image) are another type of drum that are a lot bigger than the bombo, but shorter. It is covered in animal skin and produces a deep bassy sound.

Chullus is another name given to Chajchas and they are made from dried goat hooves, tied with a ribbon. These can also be made from seashells, beads, stones, seeds and hardwood. When shaken, they recreate the sounds of wind or the rain.

The Charango is a small, 10 stringed instrument that belongs to the lute family. It was created by the Andeans post-Spanish colonisation, taking inspiration from the Vihuela (the ancestor to the modern-day guitar).

They did not have the technology to shape wood into a Charango back then, so the bodies were typically made from the shell of an armadillo.

Many other instruments are used that are more common to us like the lute, violin, guitar, harp, accordion, saxophone and mandolin.

Tips on how to recreate your own Andean music:

You don’t need to have access to all these primitive instruments in order to make Andean music. There are plenty of VST’s (paid or free) that offer you digital versions of these instruments. You can also get easy access to modern replicas of panpipes, mandolins, Quenas,  Andean percussion instruments etc. Even if you don’t have access to these, you can always use substitutes.

Pentatonic scales are extremely important in Andean music as traditionally their instruments could not produce all the tones of a 7 note scale.

You take any scale and turn it into a pentatonic by only using the first, second, third, fifth and sixth notes in that scale.

Your guitar, mandolin or charango is just as much a percussion instrument as it is a string instrument!

String instruments were only incorporated into Andean folk music after Spanish colonisation. The instrument plays a melodic, percussive, and rhythmic role within the music.

The Andes took the Latin style guitar genre and morphed it into something that would fit better with their musical style.

Instead of letting each note ring out, the Andeans used a lot of muted chords. This technique essentially allows you to have tuned percussion.

Use this video tutorial of the Peruvian Vals as a guide to Andean Strumming patterns.

A Cajon is a box that drummers can sit on and hit at the same time to create a bassy sound. It is becoming increasingly popular within a variety of musical genres, including world music.

This instrument was created by African slaves in Peru during the 19th century and most modern Andean folk music will include a Cajon.

It’s convenient, easy to use and easy to access. So, if you don’t have traditional Andean percussion instruments at your disposal, you can use a Cajon or easily find a VST sampling its sounds. Use other percussion like rattles or shakers as well.
I created an Andean instrumental soundtrack, specifically Peruvian, following the life of an Alpaca named Sandro which you can listen to here.