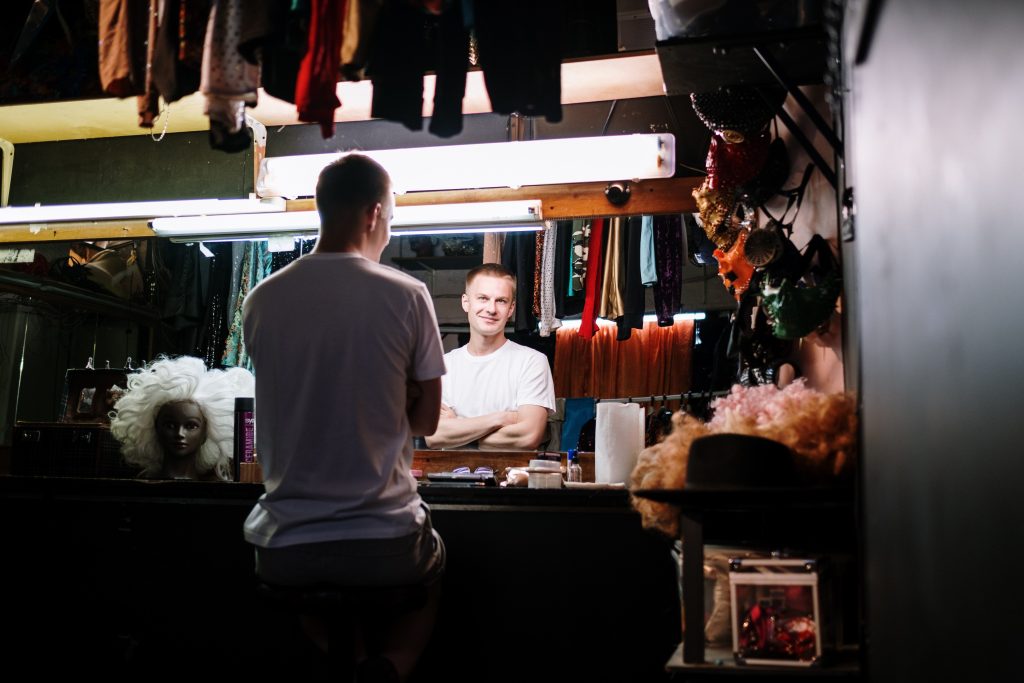 How a man gets ready for stage and screen!

Makeup for men is commonplace in the performing arts, and it was only at university that I began to notice how significant each aspect of the backstage process was. I began to see how just a few steps could highlight the features of a face to make a performer’s features stand out, something that is vitally important if you want to ensure the audience can see the expressions of the actors on stage. As a result, I thought that I’d share what I know about the often-overlooked art of male grooming for the stage!

Stage makeup is used to ensure a person’s face is clear and visible and looks natural on stage, despite the harsh lighting of the average theatre space. So even if they are going for a natural look, a good foundation will be more effective than nothing.

To start, clean and dry the face before makeup is applied to provide the best base for foundation. And if they don’t intend to show any facial hair, make sure they are entirely clean-shaven as a rough stubble will get in the way of smooth application.

Remember that for lighter skin tones, use a darker than natural foundation because the stage light brightens certain skin tones, so adjusting for this will make the performer appear clearer and of a more natural hue. The foundation also acts to lessen the shine of the spotlight, so the face is less likely to be obscured by the brightness.

Check out this video for a good run-through of the basics of male foundation for some helpful tips:

The performance could call for something more specific, for example, a characteristic scar of a false nose, or even just more makeup. Most of which go hand in hand with a foundation like this to blend the skin tones, cover any contact points and appear natural under the lights of the stage. This is another reason why a tech run in full costume and makeup before the show is important, to ensure that your makeup works with the show’s lighting throughout each scene. Or the performer may be made up in a foundation of bright blue. In which case, a clean face and no stubble is still a great place to start when any makeup or face paint is needed.

Beyond the cosmetics, there is also costume and grooming to consider. Male grooming can be important depending on the role. Sometimes a role will call for being unkempt.

The hairstyle of a performer can also be extremely important. For example, matching the performance context as certain fashions were not present during certain periods of history. Alternatively, the performance may be more abstract, requiring the hair to be functional and not distracting, as the performer’s movements tell the story on their own. The same goes for costume. Neutral and easy moving black clothing is a common and effective outfit for physical theatre. It is best to keep at hand some neutral clothing for more physical and abstract performance. It is always important to think of the performance first when planning which grooming techniques to apply.