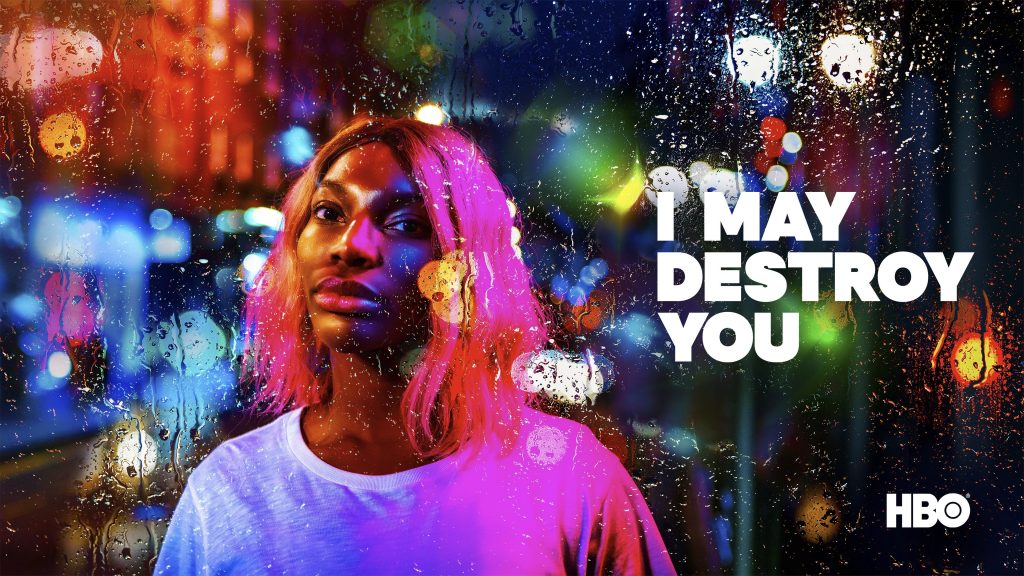 I May Destroy You is great. When she accepted her Leading Actress BAFTA in 2021 for her main role in the show, Michaela Coel said to the other nominees “I wrote my words – I know that your talent to take words a writer has written and to make it sound like your own is unbelievable.” Coel wrote and starred in I May Destroy You, which also won best mini-series, as well as co-producing it and co-directing alongside Sam Miller (Luther, Snowpiercer). It’s becoming increasingly common in British TV for the creator/lead writer to take on more creative control like this, and it’s a change I am more than welcoming of. I feel that due to this shift, it’s only increasing the odds that shows like I May Destroy You come along – series that are so inspired and intimate, so meaningful and eloquent, they’ll finally kill the outdated perception of TV as ‘not real art’.

Coel plays Arabella, a working-class black writer, who decides to party with friends instead of working on a deadline for her publishers. They end up at a London bar, Ego Death, where Arabella is drugged and orally raped by a white man. Touching on ideas of sex and consent, mental health and childhood, power, social media and creativity, gender, class and race, I May Destroy You might sound on paper like an edgier version of a zeitgeist-y Netflix Original; a show that aims to ‘start a conversation’ rather than a show with something meaningful to represent.

Variably called a drama or comedy-drama, the BBC-HBO co-production runs for six hours over twelve episodes, essentially the same runtime as any show with six hour-long episodes. Despite the standard format, the series has a novel’s worth of ideas, characters, and events – from Arabella’s discovery of her being a diversity hire at a Millennial vegan start-up brand to her friend Kwame’s continued mistakes and sexual traumas as a modern black gay man. Many shows would wish to ‘tackle’ these ideas as ‘issues’, rather than exploring them as lived experiences, therefore most likely playing them incredibly safe in an attempt to avoid controversial portrayals of fraught contemporary topics. For example, gay characters like Kwame can’t have the terrible experiences he does, or make the sexual mistakes he does, as showing the imperfect realities of gay life is homophobic – or worse, bad publicity.

It’s a dangerous and reductionist way of writing drama. In fact, that’s not drama – if drama is a fictional portrayal of something that gave the writer some kind of gut reaction. It’s a Public Service Announcement amounting to “the gays are people now”, and Coel understands that. After her assault, Arabella says that rarely before did she consider her race and gender as having had comparable impacts on her life as her social class. We find ourselves in a time where social media and Awareness Days further encourage people to accept their identity as things out of their control. They’re reduced down to Proper Nouns and capital letter Experiences, rather than humans capable of contradictions, imperfections, and individual beauty who navigate an imperfect world. No gay person should be a representative or spokesperson for the LGBTQ+ community. No black person should be a representative or spokesperson for all black people. If they choose, they should be honest about their own experiences and those similar to them. That’s what the basis of drama writing is.

Nothing in the show is wasted or undeveloped. Every character and moment serve the story, and the cast – predominantly Black Brits – are at the top of their games. Danielle Vitalis and Lauren-Joy Williams play teenage versions of Arabella and Terry – Arabella’s best friend – during flashbacks and both of them effectively embody those characters in their youth. Their episode acts as a flashback to 2004 when the characters were in secondary school. Coel’s writing is able to, seemingly effortlessly, recall the feeling of being that age, already beginning to internalise and repeat the horrors of the world.

I May Destroy You looks sleek. The lighting switches between fuzzy warms and intense neons, the sets between domestic, rundown flats and modern, state-of-the-art bars. Arabella shaves her hair off at one point, something Coel actually did for the role. There’s a mania to how the show is presented, where the entire world feels either dulled and muted or unbearably loud and bright. Costumes are all patterned or in block colours – visually, the series is stunning and memorable. It feels as vivid as a novel, and in every shot, there’s something interesting or beautiful to focus on. None of this distracts from the story, though. Like the best direction, more emotion is said through a static shot than a monologue ever could.

Arabella’s extremely volatile and visible breakdown, aided by online encouragement, in the episode “Social Media is a Great Way to Connect” is a confrontational shock to the audience. She rants angrily on a livestream to thousands of followers, claiming that a man could easily drag her into a dark alley at that very moment – despite walking through a brightly lit, heavily populated street in London. And her followers agree with her. They tell her they love her. They’ve never met her.

By this point in the show, Coel’s character has been through the wars and is understandably in a very delicate mental state. Support groups and ‘self-care’ can only go so far when your personhood has been consistently denied as much as hers. Her feelings are honest, she’s done her research, and you can empathise with her, but they should be discussed in private with a professional, or with the loved ones she’s pushing away. They certainly shouldn’t be openly shared on the internet where people in similar situations can add to her collapse, and her to theirs – but social media is a great way to connect, right? We should be encouraging online discussions like this, therefore placing flawed and vulnerable individuals in the spotlight as spokespeople, shouldn’t we?

In the same episode, Arabella meets with a doctor and ends up ignoring his concerns about her health, instead livestreaming in front of him with a cascade of self-care platitudes – “as you know, you can’t give peace if you don’t have peace.” She’s had a CT scan of her brain and uses that as a buffer to deny claims that she’s “crazy.” Terry says that there’s “stressed people asking her to defend them and expose rapists, abusers, and paedos – and she does this day and night via phone screen.” Arabella begins pushing her friends away, understandably given how she’s been hurt by those considered close to her and instead takes on the role of someone fighting for justice online.

It’s always an admirable goal – but it’s a fact that the stress of being placed in that spotlight, seeing horrific daily stories of rape and abuse and being asked to somehow help the victims, is too much for even the strongest of people. The internet is fundamental to our way of life, and it’s given oppressed and ignored populations increased visibility and freedom of speech. That doesn’t mean it should be allowed to control us and force those people to be bombarded with similar stories who are then expected to do something about that.

The internet can and does influence elections, summits, and policies – but the scope of emotion, empathy, and strength that we have as humans is just the same as it was before. Now we’re expected to take on everyone’s pain as our own constantly, with no buffer or safe space. At any given time, we’ll be surrounded by two, three, four screens with consistent news we (as conscientious modern citizens) must absorb and understand. Is it any wonder we’re so politically and socially fraught when there seems to be only bad news in the world? Is it any wonder there’s a mental illness epidemic, when – just like Arabella – in all aspects of life we see the full scope of the world despite not yet having the psychological ability to face that?

Turn off those screens. They’ll destroy you.

I May Destroy You is available on HBO and for streaming in the UK on BBC iPlayer.