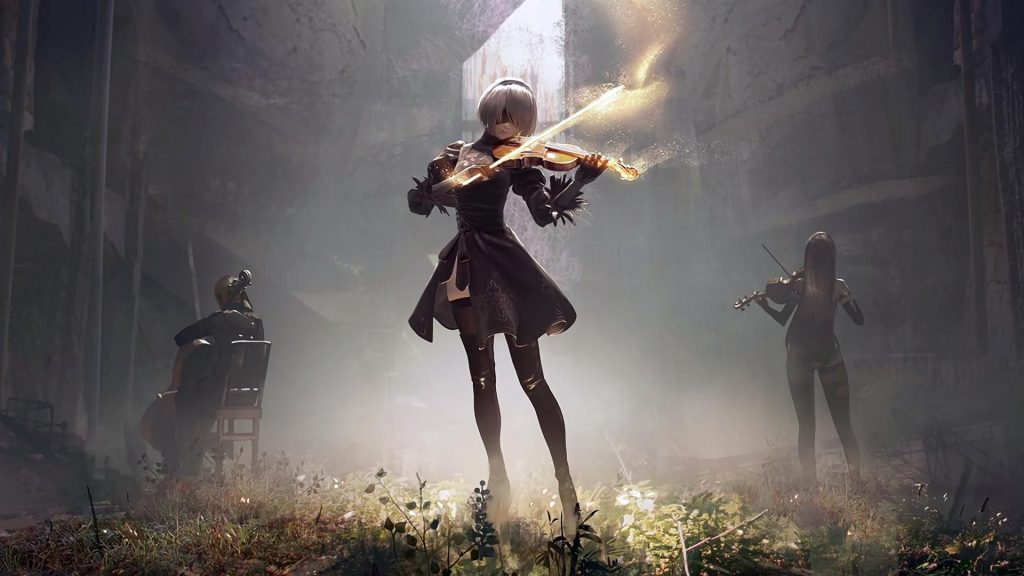 Everyone loves video games. They’ve become a staple of modern entertainment, and are available across the world in all kinds of shapes, sizes and genres. When you think of a game, you probably primarily think of gameplay. Nowadays, you might think of story, or visuals. But one thing has stayed consistent for decades: the masterful soundtracks that accompany our favourite games. So, without further ado, here is a celebration of 25 of our favourite video game soundtracks, accompanied with a taster song or two for each.

The beloved indie RPG is known far and wide for its story, characters, and incredible music. ‘His Theme’ is short and simple, beautiful to the ears and tear-inducing to the eyes.

‘Devil May Cry’ is a series known for its outrageous story, charismatic characters and SSStylish(!!!) combat. And what better to make you feel like an awesome half-demon, sword-wielding maniac than a badass soundtrack to accompany it? Enjoy Vergil’s illustrious theme from the Devil May Cry 5 Special Edition!

The ‘Persona’ series’ latest instalment stole the hearts of fans worldwide, and chances are you’ve heard this song before (whether you saw it coming or not!)

This iconic sandbox game is the best-selling game of all time, and is still growing its playerbase to this day! Enjoy this dulcet music while you explore, build and mine.

This odd little (frustrating, yet satisfying) game shot into fame with the bloody, difficult fights and energising music. Try listening to it while doing a workout or any other demanding tasks!

The classic game that defined the FPS genre had an ambitious OST to boot. Rip and tear to this techno-metal fusion!

7. Rayman – Check It Out, the Fairy Council

One of Ubisoft’s oldest franchises, the original 2D platformer ‘Rayman’ had vibrant colours and an addictive soundtrack. While its sequels switched to 3D, the music remained just as good throughout.

The latest of the renowned fighting series was released in a somewhat poor state, and it has been improved with numerous updates since then. What we never had to worry about however, was the thrilling themes for each character.

Believed by many fans to be the greatest of the ‘Fallout’ games (no comment from me), it’s hard not to get psyched to get into the wasteland with a title theme like this.

From the never-ending JRPG franchise comes everyone’s favourite (no comment yet again) entry, with the climactic final battle with the ‘One Winged Angel’ himself yielding an awesome song that has been played time and time again through the years.

It doesn’t get more iconic than this. Birthing the (factually) most famous game franchise ever, this theme is undoubtedly the single most recognisable video game track from the past 36 years. And it will never grow old.

Regarded as the greatest fighting game ever made (back to having no comment from me), ‘Street Fighter II’ revolutionised the world of fighting games. The acclaimed soundtrack was composed by Yoko Shimomura, one of the earliest and greatest video game music composing queens (and she fully deserves the title!)

The 1930s aesthetic, the jazzy soundtrack, it all complements an ingenious game and its wonderfully unique style. No matter how difficult it is, every lover of classic animation and music owes it to themselves to give this game a shot.

For a game all about exploring an alien setting, this theme certainly provides the right atmosphere. Filled with emotions of uncertainty and mystery, but also evoking wonder, excitement, and, aptly, hope.

15. The Legend of Spyro – Temple to Freezer / Cynder Boss Convexity

Now for a personal favourite. Some may wonder, what’s ‘The Legend of Spyro’? Where’s the original games? Well, simply put, everyone knows and loves the old music. But how many people know of this simply masterful soundtrack for an underappreciated reboot trilogy of games? Say what you will about the beat ‘em up gameplay and strangely serious story, but I will not take any slander for this gorgeous orchestral score that can go from a beautiful, serene choir to an intense, climactic thrill of a track. I just couldn’t decide which to put, so enjoy both!

This is certainly the best insect-filled Metroidvania game out there. With near perfect ratings across the board, ‘Hollow Knight’ accentuates its gameplay with wondrous music. One day, just one day, we might know if the sequel will come out with just as good of a soundtrack.

Ah, ‘Modern Warfare 2’. What feels like so long ago that we booted up our Xbox 360s and heard this song start to play. Hans Zimmer truly is masterful, and this nostalgic theme is proof of that.

Hope you have a box of tissues on hand. Telltale Games’ first big success in a line of wonderfully crafted stories, and this song perfectly encapsulates the tones of the game.

Is this the best Zelda game to this day? Maybe. Is the music as amazing as ever? Definitely. Simply enjoy a beloved Nintendo theme and reminisce about the good ol’ days.

Another Xbox classic, the theme was accompanied by songs from rock bands Breaking Benjamin, Incubus and Hoobastank (not to mention Nile Rodgers). Take another trip down memory lane with this staple of ‘Halo’ music.

The culmination of the beloved ‘Super Smash Bros.’ series, with every fighter from the past 4 games brought into one massive fighting game. While the game features great songs and remixes from all the properties it contains, the main theme of the game is beautifully sung by ‘Abby Trott’.

Yet another Nintendo entry on this list, ‘Breath of the Wild’ is a staple for the Nintendo Switch. Brave Hyrule once more with a soothing (and abundant) soundtrack, or kick back and relax, do some work, or be eased into a nap. This music can do it all.

Nintendo really can nail the music department on their games, can’t they? This game needs no introduction, and neither does the OST. Relive the glory days of the 64 with this timeless soundtrack.

It doesn’t get much more stylish than this. ‘Bayonetta’ is a fantastic game developed by one of the most talented companies out there, PlatinumGames. A beautifully fun, remixed rendition of ‘Fly me to the Moon’ (while not originally performed by Sinatra, it is most often associated with him) plays throughout the game, and it doesn’t get any less addictive with the sultry vocals. The sequel featured a gorgeous version of ‘Moon River’ as its main theme, I’ll throw it in for free! They’re both extraordinary. I can’t wait to see what lunar song features in the long awaited third game.

And for our final entry, the beloved ‘Sonic’ series just had to make one appearance. I don’t believe in such a thing as a ‘bad Sonic soundtrack’, they’re rarer than unicorns. ‘Adventure 2’ had nonstop amazing tracks, and the themes of the Chao Garden were no exception. Relax to these tranquil songs and think of the little buddies in their nice gardens. Aren’t they adorable?

How did you enjoy our list? Any favourites show up? What was missing? Let us know in the comments!

Many, many thanks to our wonderful gaming writing team that helped make this list possible!