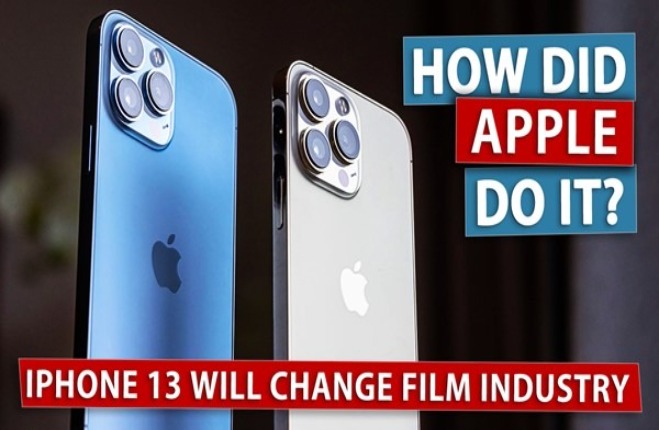 This is what you’d call a historic moment in video or film history. A product that has the potential to change the industry just as the introduction of colour in 1916 or sound in 1927 did. They transformed forever the way not just how people watched films at the time, but the entire industry. Only time will tell this time around but if I was Canon, Sony, Nikon or any other manufacturer of mirrorless or DSLR cameras, I’d be looking at the iPhone 13 range and be very worried. Because this phone, and in particular the cameras inside with the new cinematic mode, could revolutionise the way films and content are filmed.

Okay, so what all these things have in common, can you guess? These are things that have been cannibalised by the iPhone since it first came out in 2007. And there are probably way more than you can see in this list. These are things that at some point were used in everyday life, by pretty much everyone. The iPhone has gradually disrupted, ruthlessly obliterated or essentially killed off outright so many things that we thought we couldn’t imagine life without. And these things, they’re gone now, and if they’re not gone for good, they’re pretty much reduced to a footnote now. There are things in this list that we still use today, by nowhere near at the levels we did 15 years ago.

By simply creating a better and simpler product, Apple has shifted the interest into their platform and products. They’ve already destroyed the point-and-shoot camera market by a whopping 90% and now, with the iPhone 13 range, I think they are about to start taking on the mid-to-low-end DSLR and mirrorless camera market. Because what the cameras in this phone can do, in such a compact size, honestly, is amazing.

You’ve probably heard a lot about by now about the new cinematic mode, something we’ve been requesting Apple for years. They have now finally released it and even though it’s a first generation software, I can tell you, the results are really good. And if you stop and think about what it’s going to be like in 3, 4 or 5 years’ time. If I was a camera manufacturer today, I’d be taking a seriously good look at what I can offer to compete against it, but not just today, but in 3, 5, 7 years’ time. Because cinematic mode, with all its limitations as a first generation product, it actually gives you some pretty amazing results if you know what you’re doing.

The main wide lens is still by far the best lens in the phone and it has been improved massively from the main wide on the 12 Pro Max. This is a really good lens, and you’re probably going to do most of the filming on it. Even in low light you get brilliant images and, honestly, it holds up really well. And there is one thing that I really like, is that for the first time you can easily add or edit metadata to the clip when you press the info icon when you playback the recorded video. This lens is phenomenal, I am always amazed at how much the iPhone can capture in such a tiny lens. It really is incredible. Although you still have the annoying lens flaring, especially obvious at night or when there are loads of lights around. ­It’s so freaking annoying and I really hope Apple can address this issue when they release the iPhone 14.

The other incredible feature that makes this phone so unique is that for the first time you can record on ProRes. And this is a game changer because not only the footage looks much better with a lot less compression, but the files are so much easier to edit. Now, I’d recommend that you shoot on ProRes LT rather than the HQ. The difference in quality is negligent but the file sizes are way smaller and given the fact the data port is still the USB2 lightning port, I’d stay away from ProRes HQ. Unless, obviously, you are happy to wait for several hours for the footage to download or you’re doing some sort of green screen or similar where you really need as much detail as possible. But the fact that you can record on a professional codec on this phone, I don’t think people realise how incredible this is. This is a better codec that some mirrorless cameras record on. And this is a codec that cameras like the Sony A7S3, the Alpha 1 or the FX3 record on, so that gives you an idea. Even the real pro cameras like the ARRI Alexa record on ProRes, and before you say come on mate, you’re comparing apples and bananas here, I am just trying to give you some perspective on how much better these cameras and lenses are compared to anything we’ve seen before. I’m not suggesting here that the iPhone 13 is better than cameras and lenses worth hundreds of thousands, far from it. Those cameras and lenses cost what they cost for a reason, they are amazing. But they cost a tonne of money. When you look at the size and weight of those cameras and you look at this, well, you can clearly see why I said that this phone is going to be historic.

This phone is going to change the way people buy equipment. Maybe not now, but it will in a year, two or three. I can totally see a near future where someone starting out in the industry and wondering whether they should upgrade their gear and buy cameras and interchangeable lenses, they might just look at the iPhone and think, well, for now this is good enough. And that is the scary part of all of this. Because this is just the start, this technology is going to get better and better every year and now that Apple has taken the genie out of the bottle, they are going to make sure that they put their R&D into this and keep up the development because they know that the cameras are one of the main drives for people upgrading their phones. I can totally see a future, and not too far, where many people just won’t bother buying expensive, heavier, and yes, better lenses or cameras, because you’ll probably be able to do most of it in a device that fits in the palm of your hand.

I mean, think of cassette tapes and vinyl discs in the 80’s and 90’s. When CDs came out, they were gone within 5 years, how it all went pop when the mp3 and the iPod came out and how eventually the iPhone and streaming killed off the iPod itself. When was the last time you bought a CD, watched a DVD, let alone buying a vinyl or a cassette? Hell, depending on how old you are, do you even know what I’m talk about?? This all happened so quickly, and I think it could well happen to mirrorless and DSLR cameras with interchangeable lenses. I might be wrong, and there will always be a market out there, and I own a good few expensive canon lenses and cameras, so it’s not like I don’t stand to lose out.

It’s definitely interesting times and anyone who creates content should be really happy that companies keep innovating and pushing the envelope. Apple is certainly a safe bet going into the future and I can’t wait to see what the iPhone 14 brings next year. For now, the 13 pro and pro max are amazing camera phones that I totally recommend and you’ll find a link below if you want to buy one. If you already have a smartphone and wonder how creative you can get with it, I have a video link appearing at the end of the video in this article just about here, that gives you 10 cool and unique shots using just a smartphone, a gimbal, and a monopod. It’s worth watching and I am sure you’ll get some inspiration.