‘It looks like cotton candy!’ Covid-19 and Vivid Dreams 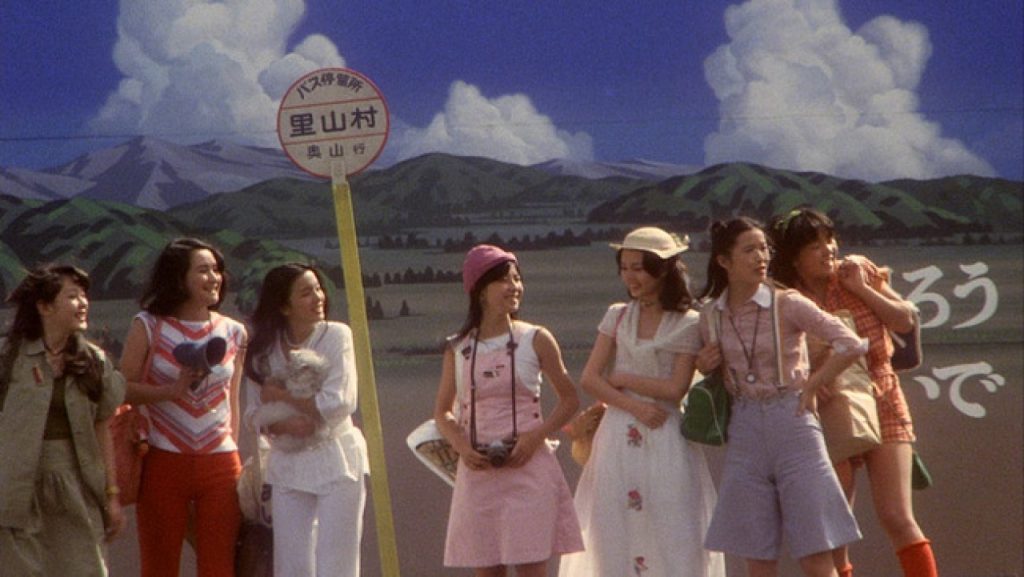 House (1977) and the Collective Unconscious.

When the director Nobuhiko Obayashi made his 1977 horror film, House, the director was inspired by conversations he’d had with his 10-year old daughter, Higumi. She told him about visions of a house that can eat people. She pondered on someone being attacked by their own reflection, a grand piano with keys for teeth that eats someone. Nobuhiko combined these images to create a rich and dreamy film, a flash of technicolour macabre that is best described as a ‘psychedelic ghost tale.’ [1] But Obayashi used the film’s fantastical world to suggest a darker message.

Obayashi had grown up in Hiroshima, where childhood friends were killed by the atomic bomb in 1945. And House captured the difference between the pre-war and post-war generations, who had never endured the trauma of nuclear attack. In one scene, a mushroom cloud pops up on the screen and a young girl giggles, ‘it looks like cotton candy!’ Through a cinematic language that we can only recognise as dreaming, House could be seen as an example of the effect that collective trauma has on unconsciousness.

In 1986, a NASA challenger exploded 73 seconds into its mission, killing all 7 crew members. The explosion was broadcasted on live TV and thousands stood watching at the Kennedy Space Center, as the shuttle burst into a plume of smoke. A study which randomly interviewed children in the explosion’s aftermath found that a quarter had experienced repeating shuttle-related dreams. [2] Even children that had lived in different timezones to the space shuttle, and therefore couldn’t have watched it live, were reliving its impact. A similar pattern has been observed in dream studies following World War II, the Gulf War, 9/11 and most recently, Covid-19.

During the March lockdown, I found myself having the strangest dreams. Particularly in that first lockdown, it felt like dreaming was my escapism from each day blurring into one. Without any gigs to play, any football to watch; with concerns about family, about working, about uni, independent businesses and a pandemic, dreaming was the summit of my imagination. As lockdown-upon-lockdown continued into 2021’s super-lockdown, I noticed a pattern emerging and started a dream journal to keep track of this. Personal favourites included:

I know dreams can be a lot stranger than this, but mine are rarely this vivid. Since I started to notice a pattern in my dreams, Google reported that searches relating to weird dreams and unusual sleeping patterns are at an all-time high. Harvard, King’s College London and several institutions focused on the study of dreaming carried out tests on the pandemic’s relationship to dreams.

Why dreaming got so strange

To put it bluntly, increased levels of stress have a big influence on our dreams. So did lockdown’s lack of new feelings/experiences. With less activity occupying our minds in our waking life, the dreamworld plunders our subconscious memories for meaning. Whether it’s severe or mild, dreaming provides a way of processing trauma that our waking life feels incapable of understanding. Coronavirus is not something we can see, but we know it is there, so the visual content of our dreams are prescribed with their own metaphors and associations. As well as this, a lot of people experienced changes in sleeping architecture (sleeping patterns). Being able to sleep in longer increases our chances of dream recall and intensifies the final stage of our REM sleep, when dreams most frequently occur.

Covid-19 is something we are all experiencing, regardless of whether you’ve had the virus or not. Universally, it has shaped our inner and outer spheres, as people feel anxious, stressed and bored. It has distorted how we perceive physical contact and filtered the past through a lens of social-distancing. It has been a rare instance of collective experience and dreams have reflected that.

Seeing as dreams are largely unexplainable and unquantifiable, is there not something quite poetic about how these completely unique clusters of memory and unconscious imagination have become something that for once, we can all share? I guess I’ll re-watch House and work that out for myself.