‘Existential Bread’ with The Shakamoto Investigation 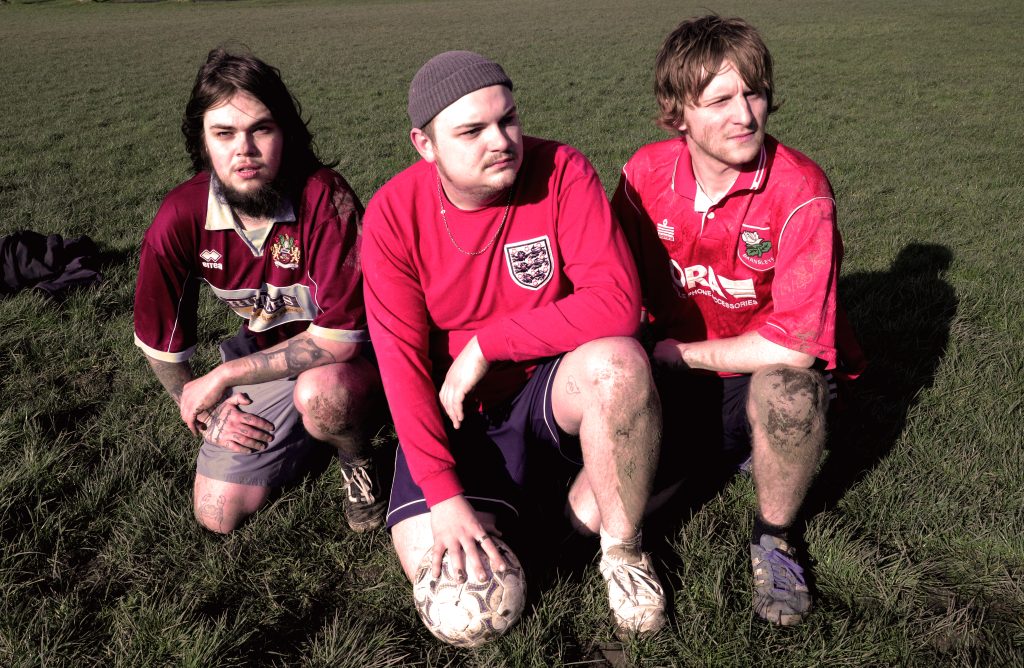 There’s a rare hush around our table as The Shakamoto Investigation’s drummer, Jake Sainty, laughs and sips from his pint. ‘My dad was in a cult. He’s been in loads of cults and that. I once came home after I’d been out with my mates and Ken Barlow was in my front room doing a spiritual awakening with my Dad. So I wrote a song about it called ‘Ken Barlow Death Cult.’’

Influenced by a mixture of Bongripper and Chas ‘n’ Dave, The Shakamoto Investigation are one of the north’s most unapologetically absurd bands. Comprising of Ellis Smith (vocals, guitar), Jake Sainty, (vocals, drums) and Sam Horton (vocals, bass), they combine a hardcore sensibility with what they call ‘Barnsley Hillbilly’. After trialling a few different vocalists, Ellis decided he’d step up to the plate after a Sisyphean journey back from a drone night in Leeds.  `We were absolutely leathered and it was snowing. We were walking back from Chunk and I thought ‘fook it, I’ll do the vocals.’ But we were walking up a hill and it was all black ice, so we were just sliding back down.’

The black ice on the hill could’ve been an omen, but they made the right choice in choosing Smith as lead vocalist. He attacks every song like a dog that’s struggling to be heard over the TV, barking his way through breakneck-speed sermons about Loch Ness, cigarillos and flatbread (‘shoutout to Murat Food Centre, their flatbread is insane’). Ellis makes the Shakamoto philosophy plain and clear: ‘if it’s chaotic and it don’t make sense, it don’t matter’. It’s a recalibration of sense and order, evoking a world that doesn’t deserve to be taken seriously. To put it simply, the band will write about anything. ‘We’ve got a new track called ‘Oogily Boogily’ – well, it’s a working title – but we’re all gonna shout ‘baked beans, bacon, fried eggs, hash browns!’ Smith divulges. ‘Yeah, we came up with that while we were outside eating flatbread. We’re gonna sing it backwards and it sounds right clever.’

The band’s debut album, Existential Bread (EEASY RECORDS) is full of tangents, fragments, in-jokes and left-turns. The tracklist could read like the first-team sheet scribbled on the back of a fag packet or the novel that Jean Genet wrote on a roll of toilet paper from his prison cell in Paris. Either way, it’s a blast. One of the band’s more ‘serious’ songs is ‘Beheaded’, chronicling society’s increasing comfort with online footage of ultraviolence. Whilst the topic is pertinent, the song eventually collapses into a Zappa-esque breakdown, full of Deliverance-style hoots and a cockney-knees-up chant. ‘We used to listen to Chas ‘n’ Dave’s Christmas Jamboree Bag all the time. One of the best things I’ve ever heard in my life. It’s this album where every track is about 4 minutes but has 50 songs within it.’ Sam chimes in, ‘the [guitar] lick is from Dead Kennedys’ ‘Viva Las Vegas’ and I’m shouting a Zappa lyric.’’

Released in December 2020, their single, ‘Loch Ness’, is the perfect melding of ridiculousness and a compact, proto-punk sensibility. It’s 1 minute 26 seconds of totally Dada, psycho, Buckfast donkabilly, it sounds like The Electric Eels trying to get into a jar of pickled onions. It showcases a band that has a refreshing aversion to being in vogue or having an image.

The UK’s current crop of angular guitar bands are sorely missing a sense of humour. Whilst Shakamoto are pretty far from post-punk, they’re undoubtedly riding its wave, having ticked off shows with the likes of Treeboy & Arc, Warmduscher and James Chance (Jake: ‘I saw his willy!’). Warmduscher aside, The Shakamoto Investigation provide a much-needed warmth to a scene that is, sometimes, a little too serious for its own good.