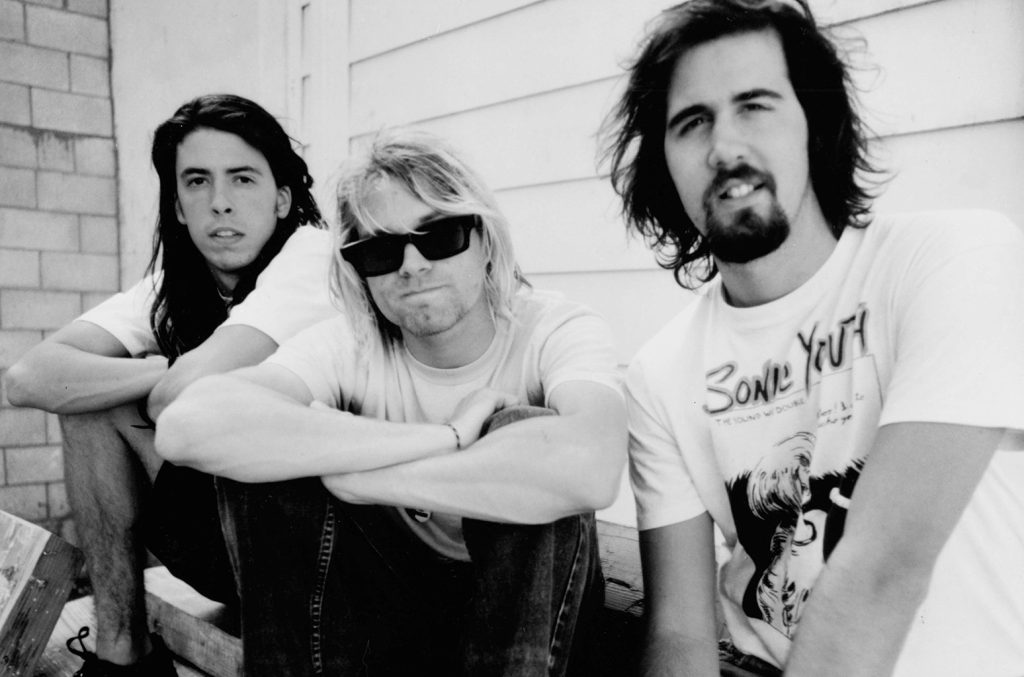 By the time I was old enough to develop a musical taste of my own and began discovering bands like Nirvana, Kurt Cobain had already been dead for 17 years. And yet, thirteen-year-old me would still have cited Nirvana’s Smells Like Teen Spirit as one of my favourite songs. This was not just because of a tendency to enjoy music from before my time but because the song still received regular airplay on TV stations like Kerrang and MTV Rocks. The opening riffs and lyrics to songs like Smells Like Teen Spirt or Come As You Are, as well as the band’s iconic smiley face logo were deeply embedded in popular culture.

The band was formed in 1987, 24 years before I began listening to them, in Washington DC by Kurt Cobain and Krist Novoselic. In 1990, they recruited Dave Grohl as a drummer and in 1991 signed for major label DGC Records. Nevermind was released on September 24 of the same year: an album that would propel them into mainstream success and would go on to be considered one of the best albums of the decade.

Only expected to sell 250,000 copies, the album far exceeded expectations within a couple of months. By Christmas of 1991, 3 months’ post-release, Nevermind was already selling 400,000 copies a week and beat Michael Jackson’s Dangerous for number one on album charts. It went on to sell over 30 million copies worldwide, and Nirvana remains one of the best-selling bands of all time, having sold over 75 million records worldwide. In 2014, they were inducted into the Rock and Roll Hall of Fame and still maintain a substantial following – many consider them to be one of the figurehead bands of Generation X.

Thirty years on, a commemorative super-deluxe edition of the album has been released. This mammoth release includes 5 CDs, including a remastered version of the original album and 4 concert recordings, a Blu-Ray DVD of the Amsterdam concert video remastered to HD and a 40-page hardback book of previously unreleased photos. A must-have for collectors and die-hard fans, although some critics would argue that the release adds nothing new to the band’s anthology. To others, it showcases the band’s growth. For fans like myself who never got to see the band play live, it’s another way to experience the band’s stage presence second-hand and in general, an important look at their growth from indie grunge band to the leading mainstream band of the genre.

“It captures Nirvana approaching their manic high; it’s a snapshot from the top of the rollercoaster waiting for the plunge.”

While live recordings of songs are hardly my favourite to listen to, the live show recordings on this edition are an interesting and fun listen. The sound quality is just as good as studio-recorded music without sacrificing the grungy, authentic, stage presence of the band.

Some critics may question the need for another commemorative album release. Especially since the 20th-anniversary deluxe edition already included previously unreleased ‘new’ content, and cynics may see the release as simply a cash-grab, but whatever your opinion on the super-deluxe release, it’s hard to argue against the cultural significance of Nevermind. One of the best-selling albums of all time, with one of the best-selling singles of all time, Nevermind is arguably one of the most important albums of the decade.

According to Dave Whitaker, ‘every generation since the beginning of recorded music has introduced a game-changing genre’, and in the 1990s, this was grunge. As a leading album of its genre, Nevermind is credited with single-handedly changing rock music and popularising alternative rock. To some, it’s considered the genre and era-defining album and one of just a few to make such a big impact. Hyperbole? Perhaps, but it is difficult to think of an album or genre that has done the same since.

Of course, Nevermind was not the only album to help shape the grunge genre, and neither was Nirvana the only grunge band, but they are arguably the most successful. Perhaps the fact that Nirvana was an all-white, all-male, US-based band is partly the reason for this, and this, perhaps, is also the reason their continued relevance is called into question today.

Nirvana’s music is far from irrelevant today. It may not be as popular as it once was, but it’s still deeply embedded in popular culture and continues to attract new generations of fans. If anything, the time that’s passed since Nevermind was released has only increased the band’s importance in the media. As Dave Grohl says in an interview with Absolute Radio, “it’s kind of taken on a much larger life than it did when we were just three guys driving around in vans.” Nirvana went from being an ordinary band to the voice of a generation, and there is a reason that Nirvana continues to attract new fans all this time later. The music is timeless, it perfectly captures the feeling of not being able to cope with being a teenager and gives a voice and sound to the marginalisation and disenfranchisement felt by many adolescents, then and today. It continues to resonate with many people. “It’s crazy,” Dave Grohl says in the same interview, “it’s an entirely new generation, thirty years later, who still listen to that record and feel the same as a kid did back then.”