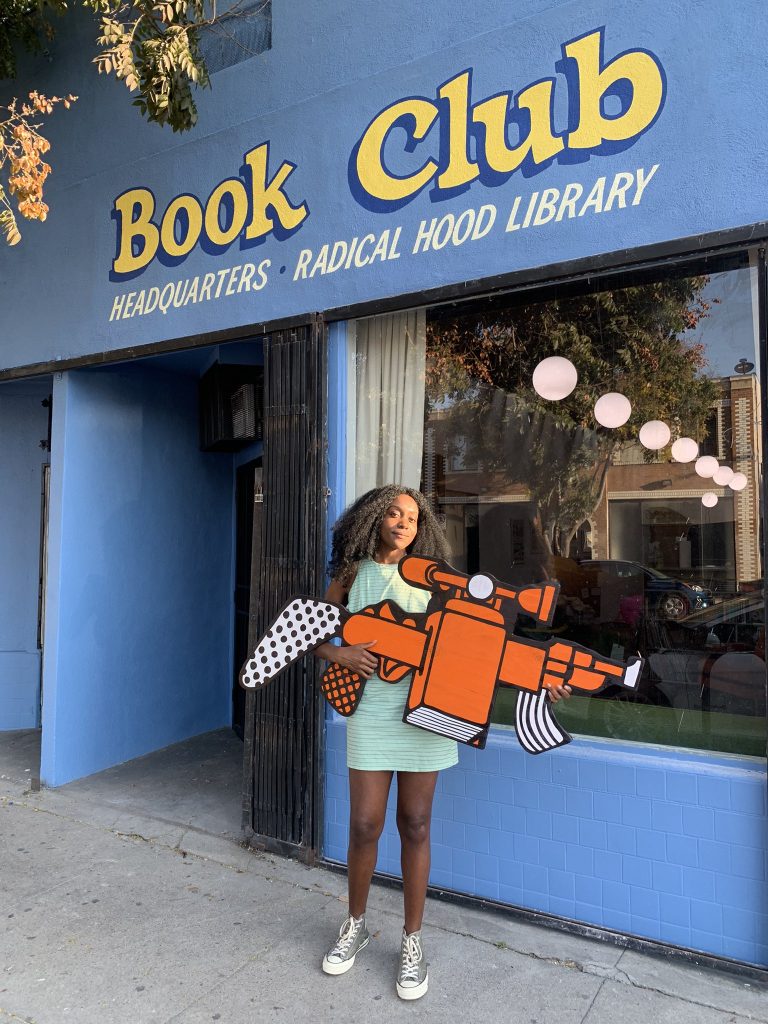 Noname (Fatimah Nyeema Warner) is a Chicago born rapper, poet, and producer. She began performing in 2010 and gained recognition in 2013 after appearing on Chance The Rapper’s mixtape, Acid Rap. She gained widespread acclaim after releasing her first mixtape, Telefone, in July 2016. In 2018 she released Room 25, described as ‘flawless’ by El Hunt of NME and Noname herself was called ‘One of the best rappers alive’ by Rolling Stone. Since, Noname has released various singles such as Song 31, Song 32, Song 33, and Rainforest.

In 2019, Noname founded Noname Book Club, an online/IRL community uplifting the voices of People of Colour (POC). The book club highlights two books per month written by authors of colour. Those that have read the books can discuss the monthly picks in their Local Book Chapter. The book club currently has 12 local chapters across the United States and plans for continuous growth.

In April 2021, they focused on expanding their prison chapters. Now, they send books to hundreds of incarcerated comrades – connecting community members both inside and outside carceral facilities through political education. According to their Patreon, Noname Book Club believe that ‘everyone (especially radicalised and colonised people), should have access to unlimited educational materials.’ They understand that the state is actively trying to erase members of their community. They dedicate time to make sure those folks feel taken care of, and not forgotten. They get letters from incarcerated book club members almost every day.

In October 2021, they launched their Book Club Headquarters, a space where they do administrative work to keep the organisation going. They package and ship books to prisons/jails and it’s also where they built their Radical Hood Library. The sections of the library are divided into sections ranging such as Imperialism, African American History, Black Radical Thought, Revolution and more. They are committed to offering free recourses to friends and family behind bars, but also, they think it’s important to have revolutionary literature freely available in their local community.

Their goal: To open physical library locations in every Black hood across the United States. To offer free educational resources to disadvantaged neighbourhoods, they rely on funding via their Patreon.

Why is this needed?

Lack of access to education is an expanding problem in many places in the world. According to Humanium, more than 72 million children of primary education age are not in school, and 759 million adults are illiterate and do not have the awareness necessary to improve their living conditions and those of their children. Causes range from poverty, marginalisation, to financial deficit of developing countries. Sub-Saharan Africa, Central and Eastern Asia, and the Pacific are severely affected by this problem with millions of children of primary school age remaining uneducated.

In more developed countries like the United States, issues like inaccessible education aren’t as transparent. The education system in the US is one of the most unequal systems in the developed world. Students are presented with extremely different options that vary depending on their family’s social status.

In Matthew Vega’s article Libraries are Tools for Revolution, educational inequity is broken down in further detail. Educational institutions ‘continue to be driven by profit and enrolment numbers, making them leery of things like “public access”.’ Vega explains that a researcher from the University of Chicago can use their student ID to borrow books, but a resident of the neighbourhood must show a government issued ID to get access for only seven days – and they aren’t even able to borrow books. He mentions that Regenstein Library, one of the premier libraries in the country, remains largely inaccessible to its surrounding Black community members. ‘Libraries are not just places to check out books but spaces where transformative visions can be cast, organisers and students can meet, and institutional knowledge can be turned upside down.’

Those with lack of access to education struggle getting ahead in life and are poorer than the well-educated, making them more susceptible to unemployment, exploitation, a shorter lifespan, and poor health. On top of all of this, Black Americans in the US are incarcerated at nearly 5 times the rate of White Americans. Incarceration creates further obstacles such as gaining employment, finding safe and stable housing, and reduction of earnings. As well as individual level consequences there are societal level consequences: high levels of imprisonment in communities cause high crime rates and neighbourhood deterioration. These consequences are disproportionately felt by Black people. The outcome of mass incarceration has been ‘designed through policies created by a dominant white culture that insists on the suppression of others.’ In 12 US states more than half of their prison population are Black.

Throughout history, oppressed groups have been and continue to be silenced for having opinions that challenge societal norms. An example is the story of American activist Martin Sostre dedicated his life to making radical books accessible to those who needed them. In 1952 he was sentenced to 6-12 years in jail which he spent reading books, he took his heightened awareness learned from living in the streets and used it to educate himself. Sostre joined the nation of Islam and hosted study groups in jail, but the prison confiscated their only Qur’an. Sostre ended up suing the state and was put in solitary confinement for 5 years as a result. After release Sostre saved up enough money to open his own bookstore providing books about African history, culture, and activism. During the 1967 rebellion Sostre kept his bookstore open late to offer refuge from tear gas. His store was later raided by the police, and Martin and his wife were framed for heroin, so he was given 31-41 years from an all-white jury. He was granted clemency in 1976 and went on to start a program mentoring teens and helping the community.

For those from disadvantaged backgrounds, relying on the state for equal access to education isn’t an option. Organisations like Noname Book Club providing free educational resources for local communities and prisons is actively changing minds, teaching freedom of thought, and providing a space for collective liberation. As organisations like this were silenced and dismantled throughout history, it’s important to support them and continue to educate ourselves and speak up about issues like racial inequity, lack of access to education, and the criminal justice system.