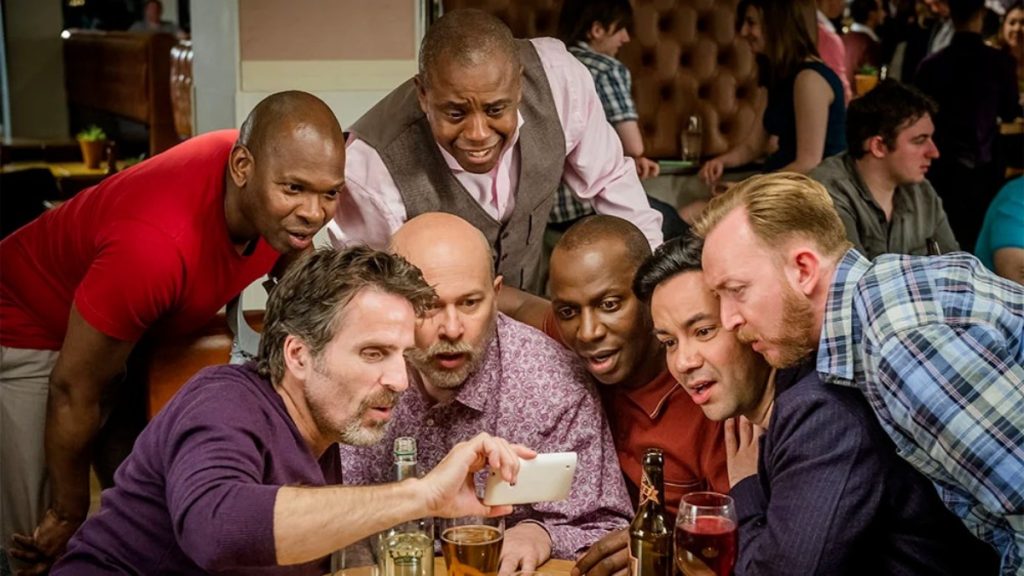 Cucumber, by BAFTA-winning drama writer Russell T. Davies, started life with the name More Gay Men. Davies wanted more gay men on British TV – something he himself is often credited with pushing forward, namely with Queer as Folk (1999-2000). It was a plea he had during his time as lead writer and executive producer of Doctor Who from 2005 to 2010. Davies had begun envisioning the series way back in 2006, but his schedule was full up due to the extensive Who workload. Focussing on the lives of middle-aged queer men in the modern day, Davies hoped that he’d be able to say something “about gay men, about couples, about communications, about anger.”

Henry Best (Vincent Franklin, The Thick of It, Bodyguard) and his boyfriend of 9 years, Lance Sullivan (Cyril Nri, The Bill), have settled down with well-paying professional jobs and a joint mortgage. Compared to the wild and single nights of Queer as Folk, these guys seem like they’ve got it all figured out. But they haven’t. Because no couple has. Henry has never had penetrative sex, not even with Lance. Lance wants to get married, Henry doesn’t. Lance wants to have ‘proper sex’ with his partner. Henry doesn’t. Lance, pent up and jaded, wants to have a threesome. Henry wants Lance to learn how to swim. By the end of episode one and the end of a terrible day for both of them, their entire lives have fallen apart and you just know there’s no going back.

Despite spending a decade in the planning stages, Cucumber struggles to have a cohesive idea binding everything together. Henry, perhaps scared of intimacy or simply just yearning for “one more c*ck”, moves into a flatshare with young, low-paid queer people who work in the same building as him. Lance is bitter and angry at being sexually rejected for ten years, so falls for an arrogant narcissist, Daniel, whose sexuality is confusing and ambiguous. It won’t end well for him. The series meditates on long-term gay relationships but doesn’t appear to be entirely sure on what it’s saying about them. It feels more like an explosion of thoughts and ideas that Davies had boiling away but was never able to hone into something solid and coherent.

In easily the best scene in the show, Lance tells Henry about a song in his head that “keeps going round and round, some stupid piece of sh*t from thirty years ago.” Lance’s own words are probably the best description I could give of Cucumber and its characters; “some tiny little fact that won’t go away. Because that’s what we are Henry… All the stuff that just gathers over the years whether we want it to or not.” Davies had yearned to write the show for years. Yet once he was finally able, after it had been rattling around his head for so long, the end result just makes you ask ‘so, what?’

Cucumber would’ve perhaps been better served if Henry wasn’t such a terrible person. He thinks bad things, he says bad things, and he does bad things. Constantly. He’s more than happy to demand that Lance ‘wait for him,’ so he can work through whatever scares him about sex. Davies’ characters are often selfish and it’s a trait that we all have to one degree or another. There’s a monumental difference, though, between doing what you want and demanding that the world and everyone in it bend to your desires. This itself wouldn’t even be an issue, but the series positions itself as being on Henry’s side. As if we’re meant to root for the man who would call the police on his black gay boyfriend during a domestic. People will tell Henry that’s he’s smug, that he’s selfish and arrogant – and they’re right. He does grow and change, if only in the final scene, and there are reasons why he is the way he is. Franklin plays him with a charismatic vulnerability, but none of this changes the fact that for the majority of the time we spend with him the man is pitiful, self-serving, and – at points – thoroughly unlikable.

“I hate gay men. I hate them all. Why are we even going?”

There’s a range of secondary characters, some of which are developed further in the companion show Banana (2015). Most notable is Freddie Baxter, played by Freddie Fox, a bisexual 24-year-old who acts as somewhat of a love interest for Henry. Henry’s callous and cruel attitude can be unappealing, but Freddie’s younger, hotter, and crueller part in the series is balanced perfectly by Fox’s equally-charismatic portrayal. There’s a tendency in media to portray bisexuals as greedy and aloof, based on the perception that our heads can be turned by anyone, and that’s no different here. But Freddie’s young, he’s not had it easy and there’s enough depth and delicacy to how he’s written that it’s understandable why he is the way he is.

Henry’s sister, Cleo, is played by cis actor Julie Hesmondhalgh – who portrayed the fictional transwoman Hayley Cropper in Coronation Street between 1998 and 2014. Hesmondhalgh, as she does in every role, plays Cleo with warmth and lovability. Not even her character can stand Henry all the time, though. After Lance takes their joint savings, Henry uses his teenage nephew Adam and his friends to create softcore homoerotic videos to generate income. She’s, understandably, not thrilled when she finds out. Cucumber isn’t lacking in moments where people confront Henry on his behaviour, but his confrontation with Cleo is one of the few where it seems to make an impact on him.

There’s also Dean (Fisayo Akinade), whose naivety and ‘specific’ fetishes offer some much-needed comic relief at points. In Episode 4, it appears as though Dean’s been kidnapped – but it’s just an elaborate sex game with a married couple, a pair of burly Mancunian men dressed up in leather and balaclavas who call each other names like “sweetheart”. It’s a bizarre moment, but there’s a warmth and humanity to those scenes that far outpace anything Henry’s capable of.

Cucumber was seen positively by critics – The Guardian called it “gloriously, triumphantly, explicitly gay”, whilst noting that straight viewers wouldn’t feel “left out”. Audiences felt differently, with Episode One gaining 1.5 million viewers, whereas Episode Eight failed to hold 0.6 million. It’s easy to see why this drop off occurred, when your protagonist is as unpleasant as Henry and your plot shudders along without a clear end in sight. Davies had more recent success with It’s a Sin, the 2021 series about the AIDS epidemic, and he’s described Cucumber as a learning moment. I didn’t hate it, Davies’ writing at a minimum is funny and heartfelt. But it’s easy to see why this series became the forgotten child.

Cucumber is available to stream on All4.