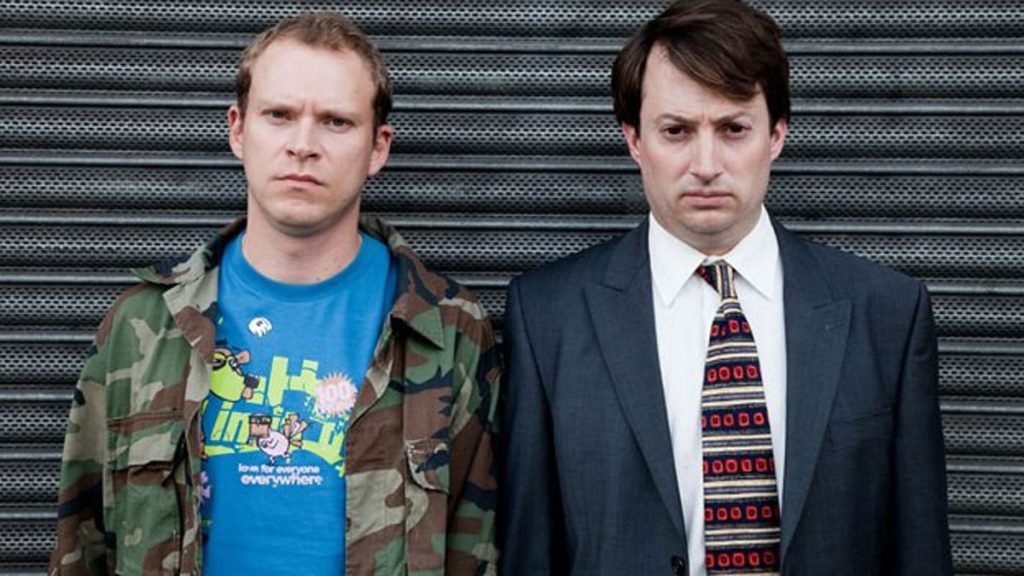 Peep Show is a Channel 4 comedy series written by Jesse Armstrong and Sam Bain, which ran for 9 series between 2003 and 2015. We follow the lives of Mark (David Mitchell) and his freeloader flatmate and failed musician Jeremy (Robert Webb) as they get themselves in awkward situations, usually by their own faults. Each episode is filmed from the perspective of the characters hence the name “Peep Show”. Whilst I love the entirety of this series, I do have personal favourites which stand out for many reasons. This top 5 wasn’t easy to choose, which I think is a testament to how good this show is. Be warned there are a few spoilers ahead, so if you haven’t seen the show, I recommend you stop reading.

I like the first series, but it’s the second where the show starts to pick up in quality. In this episode, Mark, in his desperate attempts to get with his co-worker Sophie (Olivia Colman) agrees to attend dance classes with her assuming he’s going to be learning salsa. Mark has unknowingly agreed to enter his own personal nightmare with the new age dance group “Rainbow Rhythms”. When Jeremy decides to come along with him, he, of course, fits right in. This is where Jeremy meets his second love interest of show Nancy (Rachel Blanchard).

Dance Class is where the series as a whole really starts to hit its stride, we get various classic moments including Jeremy and Mark’s very different styles of dancing, the extremely awkward kiss between the pair, and we see just how desperate and creepy Mark can get as he spies on Sophie through her emails.

Dance Class is where the series as a whole really starts to hit its stride, we get various classic moments including Jeremy and Mark’s very different styles of dancing, the extremely awkward kiss bet

The JLB conference is this weekend and Alan Johnson (Paterson Joseph) wants Mark to present Project Zeus to the board. After all, why can’t marketing go hand in hand with sales? But Mark’s reputation is on the line, and when it becomes clear that Project Zeus isn’t workable, we see what is, in my opinion, one of Mark’s best mental breakdowns of the show. Meanwhile, Jeremy’s selfishness comes back to haunt him when he agrees to Johnson’s “indecent proposal” of sleeping with his latest girlfriend, Big Suze (Sophie Winkleman), for money. Of course, Suze doesn’t agree to this and ends up leaving Jeremy for Johnson.

This one stands out to me for moments such as Johnson’s Tai-Chi (It should take 45 minutes, he’s done in 10. Stick that up your dojo), the angry lap dance, Mark’s disastrously cringy speech to the JLB board, and the first appearance of Mark’s sickly co-worker Gerard (Jim Howick) who will have a bigger impact later in the show. Patterson Joseph as Johnson steals every scene he’s in and David Mitchell is at his best in my opinion.

This episode is widely considered to be the best by fans, and I can understand why. It’s not my all-time favourite, but it still makes the top three. Mark is finally marrying Sophie after spending the majority of series 4 trying to get out of it, and whilst he seems to have accepted his fate, he still does literally everything he can to get out of it, including proposing to a woman in a coffee shop and trying to get himself run over. But as Mark is obviously too cowardly to just call it off, they tie the knot and get “over the hump.”

In the end, Sophie runs for the hills, and who can blame her?

David Mitchell’s acting in this episode is some of his best, particularly in the scene when Jeremy tells Mark he snogged Sophie at the JLB conference, he manages to combine both anger and relief perfectly to make for a hilarious outburst. From the build-up to the payoff, this one is well worth rewatching every now and then.

Mark is going to Frankfurt with JLB, so Jeremy decides to hold a Magic Mushroom party at the flat with the motive of seducing his ex-girlfriend Big Suze. There’s just one problem, Mark’s got the flu. But all is not lost when it looks like Mark is going away after all, until the flight is delayed till the morning.

This episode introduces one of the show’s most memorable characters in Big Mad Andy (Liam Noble), the mentally ill handyman that comes to fix the bathroom door. There’s also plenty of classic moments including Super Hans (Matt King) kicking in the bathroom door, Jeremy “poisoning” Mark and locking him in his room, which leads to the show’s most disgusting, awkward and hilarious final scene… I’ll leave you to see that one for yourself.

Series 2 really does get off to a strong start, and this one is my favourite overall. In this episode, as the title suggests, Jeremy finally lands a music deal… for a Honda advert. At Toni and Tony’s engagement party Jeremy meets Gog (Gareth Tunley), who he used to bully at school. He’s surprised to learn that Gog has done quite well for himself and is now a music producer, so naturally, Jeremy takes the opportunity to present his work to him. Meanwhile, Mark has made a new friend in Daryl (Steve Edge). They get on well and share similar interests. What’s the catch? He’s a racist. Of course he is, there’s no way Mark could just make a nice new friend.

From Jeremy spending all of the music funding on drugs and shoes to Mark confronting Daryl with the “Racism is not on” speech from behind the glass and locked door of a recording studio, this one is a classic and is my personal favourite.

This episode gives us an abundance of iconic quotes, and it would be rude of me to not list a few of them here:

I hope you enjoyed reading about my top 5 Peep Show episodes. This list is purely my opinion, and I’m sure not everyone will agree with me. If you would like to, why not leave your personal top 5 in the comments below? Peep Show is available to watch now on All 4.