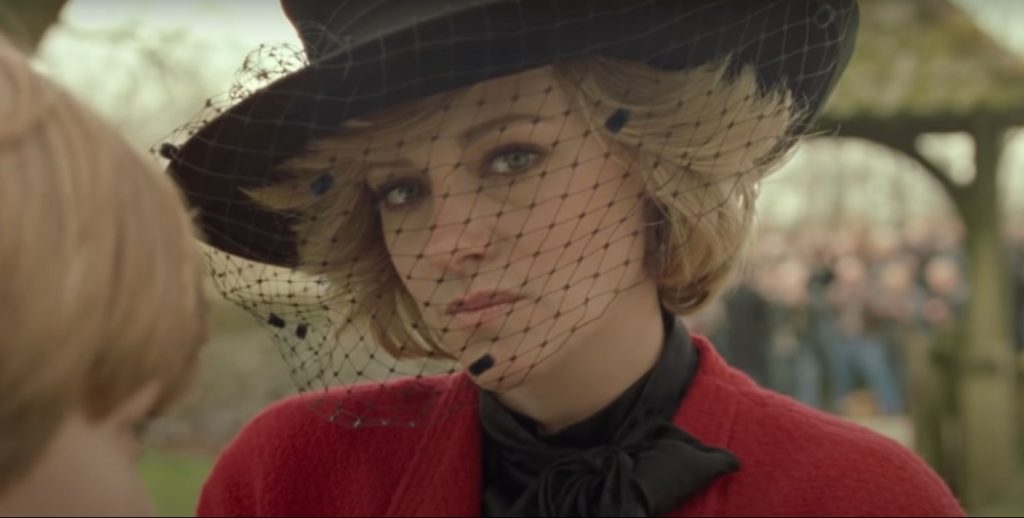 Spencer is a biographical drama film directed by Pablo LarraÍn following the marriage of Princess Diana and Prince Charles after their love had grown cold. The film mainly focuses on Diana and her struggles of spending over a decade within royalty, with issues of staying in a loveless marriage, an eating disorder, and harmful traditions of the family.

It starts misty and blue, filming an empty field on an early morning with army trucks driving left of the screen. This beginning shot quickly tells us that this will be a gloomy story, and the trucks moving left on-screen typically show how there’s no future in this specific part of the story. The film shows the very mechanical way things are done at the Queen’s Sandringham House; army men and chefs are shown getting things ready for Christmas in an orderly fashion with a sign above the kitchen that says ‘they hear everything’. This phrase is mentioned multiple times throughout the film and is the overriding fear for Diana, that someone will hear her disobeying the rules, a fitting metaphor for the rest of the film.

I’m a big fan of the cinematography in this film, and all the symbolism works very well in showing and not telling. There are multiple symmetrical shots, in the opening specifically, that create a sense of unity between the house and the characters. This unity is only disrupted when Diana appears, and the symmetry becomes distorted. Diana is the only element that can change the disciplined manner, showing simultaneously her control over the story and characters, and her alienation of fitting in with the family. Anne Boleyn is a prominent character throughout the film and is only part of Diana’s hallucinations. She symbolises two things, Diana’s need for support and her ultimate fate in the family. Diana’s only means of support is her dresser, who is sent away once the House finds out they’re good friends, keeping her isolated from any outside help. However, Diana’s main fear is that she’ll die at the hands of her husband in a house she despises, perfectly parallel to Anne Boleyn’s fate to Henry.

The way Diana’s eating disorder is presented is incredibly realistic to bulimia and subtly showed the realities of EDs without being too graphic. One of my favourite ways this was incorporated was in the dinner table scene. We see Diana struggling to eat in front of everyone at the dinner table as constant eyes are on her watching and waiting for her to join in eating with them, shunning her for being uncomfortable. She then looks over to her husband, Prince Charles, for support but is disappointed when he too is staring down on her. Pearls are shown in Diana’s soup, the same pearls Charles bought Camilla, the woman he’s cheating on Diana with, and as the realisation dawns on her, she starts aggressively eating the pearls. I loved this scene as it’s such a clear metaphor for Diana’s marital struggles. She knows Charles doesn’t love her and that everyone else knows that too so she tries forcing herself to become the woman he actually loves. However, due to her eating disorder, she runs to the bathroom to vomit the pearls back up, beautifully displaying her resilience to change her core beliefs for the family’s sake.

The music in this film is otherworldly, and Jonny Greenwood did an excellent job of crafting each piece perfectly for the scene it was in whilst matching incredibly with the cinematography. The music was sometimes overpowering within the scene, which I found worked great in this film as a way to disorientate the viewer, similarly to how Diana is disorientated in parts of the film. In many films, this technique would become annoying or ineffective, but it worked very well here.

I did really enjoy this film. However, one thing stuck out to me and that was the pacing, which I found a bit confusing at times. It felt like many shots were just a bit too long and found myself waiting for the next scene as I’d already understood what was being shown. I love new and different techniques in film, but these scenes didn’t hold any weight and could’ve managed with being cut in half. I also felt that the dialogue explained a lot more than I would’ve liked. I’m a big fan of subtlety through camera, sound, mise-en-scene, and felt the film lacked at times in those departments.

First of all, I want to mention how Kristen Stewart’s performance was truly remarkable and very convincing, and looking at picture comparisons of Diana next to Kristen, the resemblance is so uncanny it really felt like Diana was on the big screen.

Personally, I’m not a big fan of the royals, but I was super excited to see this film as it was a chance to see things from Diana’s perspective. I originally wished they went into more detail and spent longer developing the story to show her life over many years, however, I came out of the cinema feeling relieved they only showed the few days over Christmas. So much detail and anguish was presented in this film and realising it was only over a couple of days truly demonstrated Diana’s constant struggles within the family.

I also found Diana’s bulimia so realistic I found myself looking away a few times, as someone who has suffered from bulimia for many years, it pained me to watch, but I’m very glad they included it. The realities of eating disorders are still not discussed enough, and seeing someone so influential suffer from it is super important in spreading awareness on the subject.

Thanks for reading! Have you watched Spencer yet?