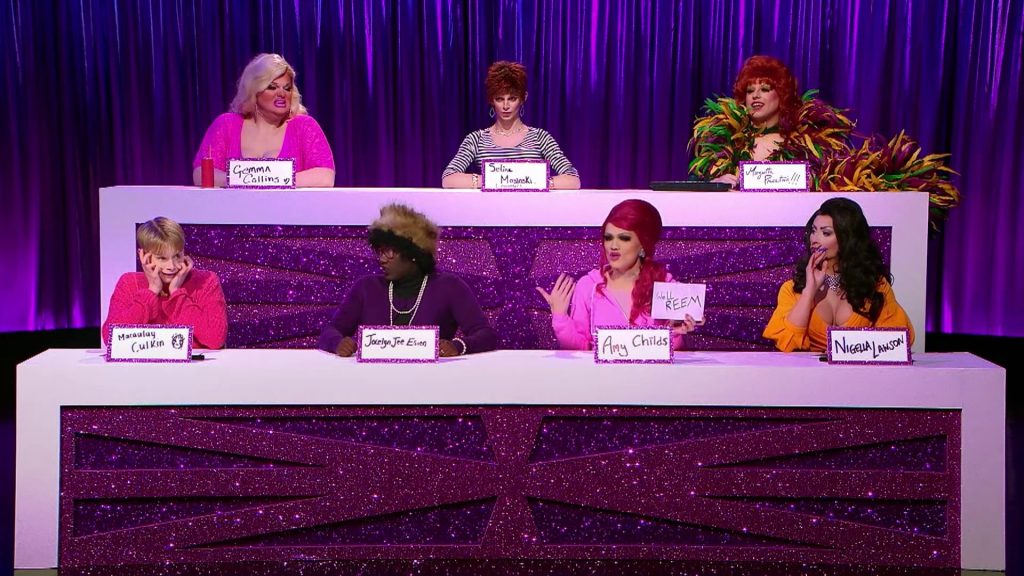 Picking a favourite Drag Race moment is a lot like picking a favourite child. There are too many amazing costumes, lip-syncs and scenes to choose just one, so here’s a rundown of iconic moments from each episode to tide you over before the next series. (series 4 has been confirmed- yay!!) Here’s an obligatory spoiler warning for the entirety of RuPaul’s Drag Race UK Series 3, but if you haven’t watched the whole thing yet, go and watch it- it’s on BBC iPlayer.

Victoria made history as the first cis woman to compete on RuPaul’s Drag Race, and her runway outfit in the style of an afternoon tea cake stand made a great first impression. With the massive slices of cake and the floral bodysuit, this was somewhere between costume and wearable artwork. It was both stylish and artistic, all the things that drag should be.

Elektra may not have won the Lip Sync battle, but it would be a disservice to ignore her performance to the dance classic “Movin’ On Up” by M People. Her flips, splits and breakdancing fits were seriously impressive, especially for a queen in heels and hip padding. Even if Elektra couldn’t keep a place in the race, she’s got my unwavering respect, which is just as good, isn’t it?!

Choriza May channeled femme fatale, supervillain, and Queen of Hearts for her runway look, with a picnic dress made from a picnic blanket to suit the camping theme. Not only did she create a stunning outfit, but she also came up with an entire backstory for her character to explain the eyepatch and owl-topped cane. Even if she got a lukewarm reception from Ru and the judges, Choriza gets a 10/10 for detail in my books!

4. Pick’n’Mix winning the challenge with their BDE ballad

Pick’n’Mix was definitely presented as the underdogs of this episode. It was really hard to not feel bad when the other queens were bragging about how the slow ballad BDE was so much worse than the upbeat version (although, of course, bragging and smack-talk is all in good fun on Drag Race!). Pick’n’Mix was able to turn it around with their performance, which was mega-cheesy (as any self-respecting pop ballad should be) and inspirational.

“Aargh, my apples have fallen out of the bag!” This week’s mini-challenge was the Dog Race, where the queens paired up to perform in a dog show- one queen as the dog, the other as the handler. The entire challenge had me rolling, but this mishap took the dog biscuit. Kitty Scott-Claus was cheering on Charity Kase, the Irritable Hound. She was jumping up and down a little bit too enthusiastically though, because her fake boobs came loose and fell down her shirt!

Tensions were pretty high during Snatch Game when both Kitty Scott-Claus and River Medway went as TOWIE girls (Gemma Collins and Amy Childs respectively). Inspired by the classic game show Blankety Blank, Snatch Game is probably my favourite part of Drag Race, and all of the queens were hilarious as their chosen celebrities. Still, there can only be one winner. Ella Vaday’s outrageous Nigella Lawson impression won the Ru Peter badge- deservedly so, I might add!

The chaotic Charity Shop Chic challenge saw the queens having to put together a piece from scratch in only one hour, salvaging clothes and accessories provided by Charity Shop Sue. The results were inspired, to say the least! Highlights of this challenge were Kitty Scott-Claus’ purple and green get-up, channeling Daphne from Scooby-Doo, Vanity Milan’s strikingly sequined orange dress, and Krystal Versace’s glamorous little black dress. Krystal was especially impressive, considering she was still picking a dress 45 minutes into the hour’s prep. The Fugly Beauty Pageant was a sight to behold, but by far the best part of this week for me was seeing my fave Kitty win her first Ru Peter badge!

8. Ella and Kitty both winning the challenge

When Ella Vaday and Kitty Scott-Claus had to do battle for the win this week, I was on the edge of my seat! They are both so fantastic and stole the show in Bra Wars and on the runway that I felt they both deserved the badge. Well, it seems that RuPaul and I are on the same level! After lip-syncing to Girl Aloud’s “Something New”, she declared Kitty and Ella both winners and they each got a coveted Ru Peter badge. Ru, you sly so-and-so!

We all know they’re queens, but are they also goddesses? Krystal Versace definitely delivered with her ethereal costume, looking like a golden statue in a temple, glittering and draped in gold chains and luxurious velvet. Her massive golden headpiece was the (gold leaf-covered) cherry on top. Krystal’s outfits tend to lean on the artistic side of drag, and when she’s at her best, it’s absolutely stunningly out of this world! Is it any surprise then that, the very next week, she would be given the crown?

Series 3 of RuPaul’s Drag Race UK was a real rollercoaster, with great looks, big laughs, and a big heaping of drag queen drama. All of the queens were stunning, but there can be only one. From the three finalists, Kitty Scott-Claus, Ella Vaday, and Krystal Versace, Krystal was chosen as the winner, and for good reason! Krystal Versace has delivered bold looks throughout the series – as Alan Carr said, her looks border on couture. To match such bold looks, a bold personality is required, which Krystal brought in spades. She’s so young but has been confident and outrageous during her time on the show. Long live Krystal Versace!

What were your favourite RuPaul’s Drag Race moments?

Do you think Krystal deserved the win or were you rooting for another queen? Let us know your thoughts by leaving a comment!