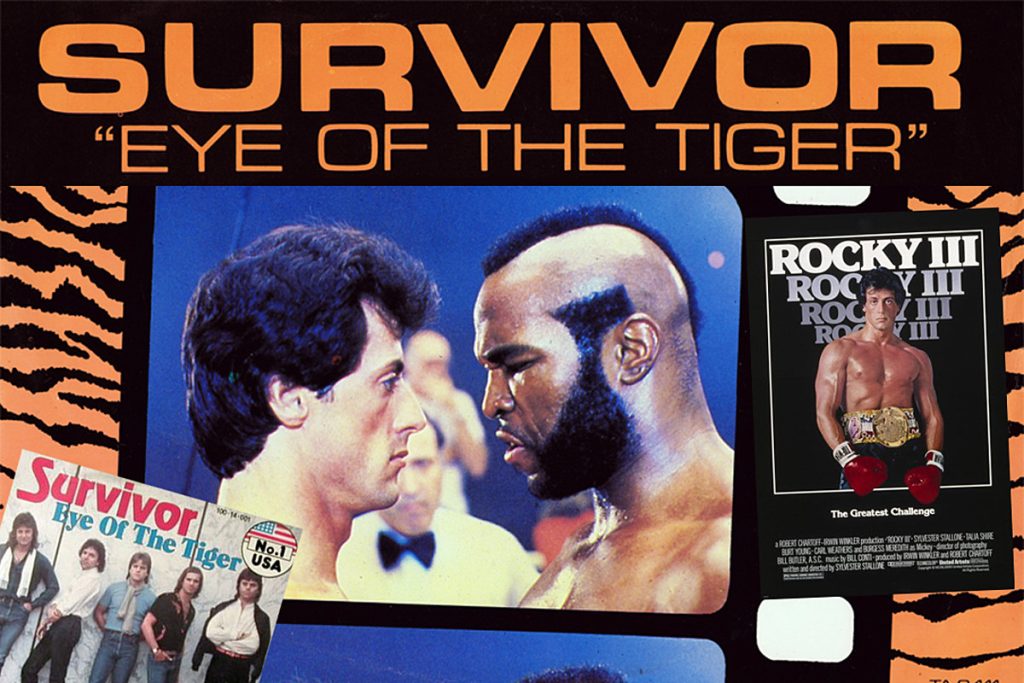 Here is our list of the greatest songs from a movie. Not an entire soundtrack, just one song from each film that sums up a scene and makes the audience feel a certain way. Like as soon as the song starts, it takes you STRAIGHT to that film type of feeling. So, sit back and relax as we shine a light on the songs that capture the essence of the films they’ve been fed into.

Kicking off our list is a rock ballad for the very first Spiderman before the meandering  Marvel Universe was even on our screens. Yep, it’s 2002, you’re in the cinema, possibly on Orange Wednesday. And you are completely focused on Toby Maguire playing Peter Parker because there’s no social media to spoil it for you.

Then the defiant drums start. Kroeger and Scott’s gravely tones and gusty guitars pair PERFECTLY with Spiderman swinging across New York Skyscrapers. It really gets the audience pumped up to take on the Green Goblin, and you can’t ask for more from a movie song.

Ninth place is one of the most stylish songs in cinema history. I know, bold statement, but it’s true. I mean, who else can pull off smoking those long cigarettes with such class but Audrey Hepburn in Breakfast At Tiffany’s?

The original Moon River was sung by Hepburn herself for Breakfast At Tiffany’s while she was wearing simple jeans and a shirt instead of the designer black dress and pearls she’s famed for. During the scene, Audrey sung in gentle yet husky tones on her balcony, daydreaming about exploring the wider world and how her only companions were the sea and sky. You can’t help but drift off with her whenever you hear it.

Eighth place is the GINORMOUS gem of Goldfinger from the film of the same name. It was the first of Shirley Bassey’s three songs for the James Bond franchise, and what a way to start! The song just embodies the glitz and glamour of the 007 universe so well.

The explosive orchestra and horns automatically transport you to whichever villain’s lair Mr Bond is battling in. Then as the music swells, Shirley’s bellowing vocals suggest: “hey, suit up and sip on a martini, shaken not stirred”. I can definitely see why the Bond crew hired her for two more songs on two more films. Bravo, Ms Bassey.

7) Eye Of The Tiger — Survivor

Seventh place is a song for potentially the greatest sports film saga to ever exist. Yep, a huge claim. A claim one cannot deny, as it is Eye Of The Tiger for the third instalment of Rocky. This is the ULTIMATE tune to get anyone amped up for anything, whether it’s working out or washing the dishes, you’re ready!

The sharp, electric sting of the guitar sets the scene, then once the drums join the party, this mega motivational anthem is off. All listeners feel like they too have the power of a beast to punch a dead cow. But don’t, Balboa knew the butcher and it was the 70s, a different time and all that. So it’s safe to say that Survivor slayed this song.

A collaborative effort shimmies into sixth place, and an unbelievable effort it is too. It begins with Bill Medley belting out the first four lines, adorned by a twinkely bass before Jennifer jumps in. The plot of Dirty Dancing is that someone who isn’t remotely interested in dance changes her tune when she has a hunk to show her the moves.

So this duet for the signature song really helps to sell the film, because pairs of aspiring dancers picture themselves as either part of the duo.Then as the dreamy instrumentals of maracas and piano build-up, so does the emotion in both voices. Next, the saxophone solo serenades us mere mortals as the pros take centre stage to demonstrate that ICONIC lift. Enough said.

5) Over The Rainbow — Judy Garland

Featured Film — The Wizard Of Oz

Claiming the halfway position is a song so idyllic that your mind floats off down the yellow brick road.  It is, of course, Over The Rainbow from The Wizard Of Oz. Now, this mesmerizing movie was one of the first to be in colour, which brought the visuals to life.

The calming strings, along with the lyrics, envisage a wonderfully weird and abstract land and bring the audio to life. The song has a strong message of overcoming any obstacle, and it was even further popularised by Israel Kamakawiwo’ole ukulele-laden version. You don’t need ruby red shoes to be whisked to Emerald City, the timeless music does the trick.

At fourth place, there’s a huge debate; could Jack have fitted on that door? Was Rose hogging all the space? One thing that’s not up for debate is Celine Dion’s spot on this list. I always knew this as the Titanic song when I was younger, before I even realised it had its own name.

The flourish of the flute just melts hearts as it reminds people of the most heartbreaking love story in all of cinema. Then Dion’s POWERFUL lungs bring it home, and before we know it, our arms are spread out wide as if we’re sailing on the front of the Titanic. Without the tragic ending.

The rightful owners of the bronze medal are The Righteous Brothers with Unchained Melody. This tender and heartfelt piece has clearly resonated with many generations as there’s at least 1,500 recordings by over 670 artists! That’s no mean feat. Even Elvis Presley had a go!

The champions of this tune, however, are The Righteous Brothers because their version was used in the romantic blockbuster Ghost. The delicate drums, bass and guitars drape over the CLASSIC pottery scene with Demi Moore and Patrick Swayze as the brothers hit the high notes and cement this song in the history books forevermore.

In the runner-up spot is the stupendously funkadelic Stayin’ Alive by the Bee Gees. Let’s take it back to the 70’s where the Vietnam war was raging as women were fighting for their rights in the workplace. This song and indeed this entire film was truly a product of its era, as John Travolta’s Tony Manero was fighting to stay alive in the mean streets of Brooklyn, New York.

Even when the global pandemic popped off in 2020, people were playing this on YouTube during the worst of times to keep positive. It just goes to show that the message is still relevant, whatever decade we’re in.

What’s more, is this song is actually used to train medical students in CPR, as the beat is almost identical to that of the life saving procedure.

1) I Will Always Love You — Whitney Houston

Taking the crown is arguably the most memorable of all movie songs, sung by the late great Whitney Houston. The famous story goes that Dolly Parton actually wrote this AND Jolene on the same night, a very productive session for her! Dolly claims that I Will Always Love You was based on her leaving her professional partner Portner Wagoner for pastures new in 1973.

Then Kevin Costner came along in 1992, looking for the lead song in his upcoming film  The Bodyguard, and Whitney’s version went on to become the best selling single by a female artist in music history.

The way I see it, both versions are incredible in their own way.

In the original, Dolly’s soft tones are smothered by the gentle twang of a country guitar as she thinks deeply about the tough decision ahead. It’s best listened through your earphones in a chilled moment of relaxation.

Whitney’s rendition is a lot more powerful with gospel flavours and has been integrated with a soulful saxophone solo. Houston really made it her own. This version is at it’s best BELTED out at karaoke or even through a hairbrush at home.

Which songs are not shining in this list? Let me know in the comments section below.