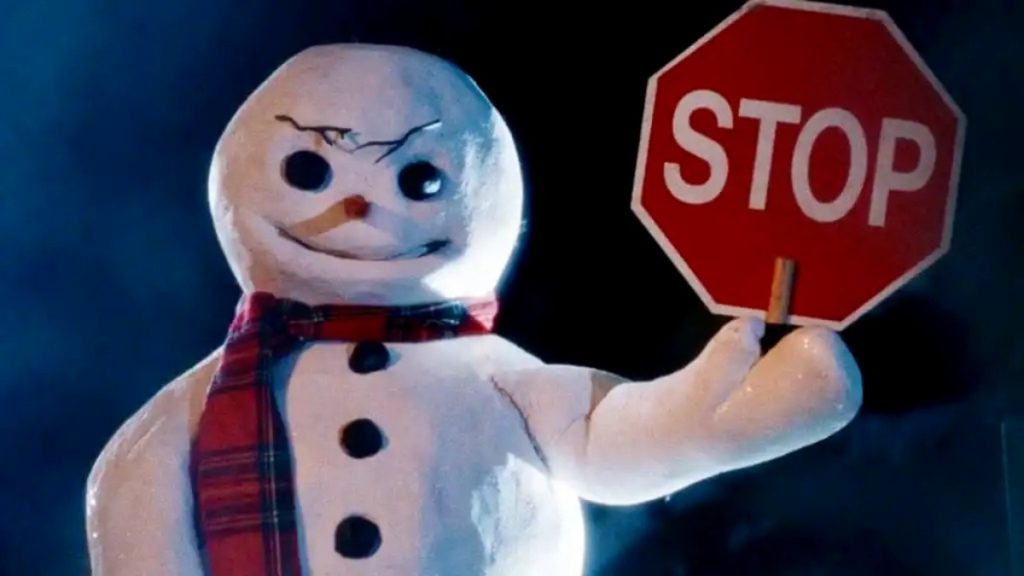 Seasonal movies are rarely a hallmark of quality, often designed to be switched on in classrooms on the last day of school; wave after wave of festive cheer to wash over you without much else going on. I’ve never met someone who’s actually sat down and watched Elf (2003) or Last Christmas (2019) without alcohol in the kitchen or a smirk on their face.

So, mix seasonal greetings with blood and gore – low-rate, low-budget horror movies that have a festive twist. Here are five Christmas horror films that might be worth checking out.

Based on McHenry’s BAFTA-winning short film, I’d heard only good things about the low-budget Anna and the Apocalypse. Hilarious, tuneful, and heartfelt. Having now seen it, I’m not sure how much I’d agree with that.

A Christmas musical zombie horror, it’s way too eager to get into the singing, dancing, and zombie killing. I would’ve liked more time with the characters outside of the apocalypse – and they remain sorely underdeveloped throughout. Musicals typically launch into song after a story beat, in order to see further into the character’s emotional state. But it’s hard to know what these characters are feeling and wanting. I don’t know whether Anna and the Apocalypse is a polemic about social media or a nostalgic testament to being 18-years-old and dreaming of leaving your stale hometown. Everything, even the gore and musical score, needed more time in production.

The cast, largely unknowns, do well with what they’re given. Mark Benton and Paul Kaye play the adults, but there’s not much for them to do. For a darkly funny Christmas movie to stick on in the background with friends or family present, there will always be worse picks than Anna and the Apocalypse. Whether there are better ones remains to be seen.

Jack Frost is a direct-to-video comedy slasher starring Scott MacDonald as Jack Frost, a serial killer involved in a chemical leak who becomes a murderous snowman. Made for so little that the writer also had to direct, and currently holding a 4.6 on IMDB, the tone is undeniably set.

This movie has cult status, and it’s easy to see why. I bounced off Anna and the Apocalypse because it had intentions higher than it could achieve, while I enjoyed Jack Frost because it knows what it can achieve. The 90-minute runtime is drenched in Christmas-based death scenes, maniacal laughter from a life-sized snowman puppet and some genuinely inventive responses to a laughable budget. Even for a film of its genre, it relies on shock value – that moment in the bath is reminiscent of ‘the tree scene’ from The Evil Dead (1981) and is just as regrettable.

Despite that, I’d still feel less self-conscious putting this movie on with friends compared to Anna. It knows what it is and what you’re watching it for; a series of gruesome murders committed by the “world’s most p*ssed-off snow cone.”

The only thing that could ruin the perfect all-American Christmas is the arrival of the white trash cousins. Dodgy assumptions about class in America aside, Krampus is the best film I’ve seen so far. It’s a real movie – not a direct-to-video mess or bloated short film concept. As an unforeseen blizzard rolls in and any chance of escape is cut off, this dysfunctional family is picked off one-by-one by a mysterious festive figure; the alpine legend of Krampus. It’s decently funny, tongue-in-cheek at points, with a refreshing balance of dark humour and genuine threat. Neither takes precedent over the other. The script and structure are perhaps too formulaic to become truly scary, with an ending so patronising and lazy it’s a bit like being stabbed with a sharpened candy cane.

The ornament-like design of some of the monsters is a treat, made better by being physical props as opposed to CGI. The sound of clanking chains and sleigh bells call through the silent night; it’s a powerful film when it wants to be, with elements of generational trauma and consumerism running throughout. The mere inclusion of some of the ideas and imagery at play make it worth a watch. Had this concept been given to a group of visionaries, it could’ve been a work of genius. As it stands though, without spoilers – because this is the first movie worth watching – there’s something quite special in Krampus.

On a similar note, there is something truly distinct within the tangled wires of Await Further Instructions.

Nick brings his new Muslim girlfriend Annji home to his white middle-class family for Christmas. They awake the next morning to find their house mysteriously sealed shut, and a single message on their TV screen – await further instructions. The set-up feels honest. It feels real. The movie aims for a sense of dread, claustrophobia, and the creeping sensation that Nick and Annji aren’t welcome here. And now they can’t leave.

I don’t think I’ve ever seen a film as frustrating as this one. Once again, had this been given to a writer able to follow through on the concept and bring about a tight cast of characters with a realistic portrayal of implicit prejudice, we’d have been left with a true hallmark of modern horror. There’s something powerful about the mundane racism of Grandad (David Bradley) mixed with this rising Lovecraftian dread. There’s nothing else quite like it.

But the script devolves into shouting and explicit Islamophobia way too early to be convincing. Despite the small cast, around half of the characters feel underdeveloped in a film where they needed to be fully formed from the word action. It begins mixing its messages towards the third act, where suddenly the movie feels more inclined towards being a polemic about ‘blah blah TV is evil’.

It could very nearly be forgiven for that because Await Further Instructions is visually staggering. Replacing tentacles with thick rubber wires, and an oppressive turquoise colour scheme, it’s not a movie that can easily be forgotten. The visuals, that is – I couldn’t tell you a single conversation that took place from across the entire runtime. Which is the problem, because this film sells itself as a festive tale of prejudice and claustrophobia. The characters needed to be deeper, the dialogue and plot needed to be more convincing. The last half-an-hour is gorgeous horror to look at, but with nothing else bolstering the visuals, it feels hollow. While it’s worth a watch, and I’d recommend going it alone for the full experience, don’t get too invested. It’s not going where you think it’s going, and it lets itself down because of that.

When it came to watching Black Christmas, I was torn between the 1974 original and the recent 2019 version. While that retelling is more relevant with its feminist themes, it’s also reportedly not very good and simply re-treads familiar ground. As such, I went back to the earliest version – generally regarded as one of the best horror films ever made – initially released as Silent Night, Evil Night.

What struck me first was the inaccuracy of the claim that the 2019 film is a feminist work and the original just a dated piece of horror media. Control is consistently exerted over women throughout the film. They’re ridiculed and ignored, made to feel small. It’s taken to a violent and deadly conclusion in the form of the killer. But he’s not the only monster in the movie.

Black Christmas is a ground-breaking work of art, and it had a clear influence on the seminal Halloween (1978). The script is engrossing, its protagonists are well-defined, and the dialogue sparkles. The first act is dripping with tension as the cast search for Clare, the first victim; those scenes with the phone calls are especially uncomfortable, even 50 years later. Barb (Margot Kidder) is a joy to watch. She’s drunken and prickly, wry and confrontational. Most comparable films were still struggling to develop their female characters this much well into the 1990s.

Special kudos should be given to the costume department. The sweater worn by Jess (Olivia Hussey), a knitted black jumper with white hands over the chest, is a brilliant example of symbolic costume design, suggesting a level of sexual violence to the proceedings. Some of the elements and story beats may seem standard and uninspired by today’s standards, but at the time this was an original and forward-looking film. Black Christmas is a great watch in its own right.