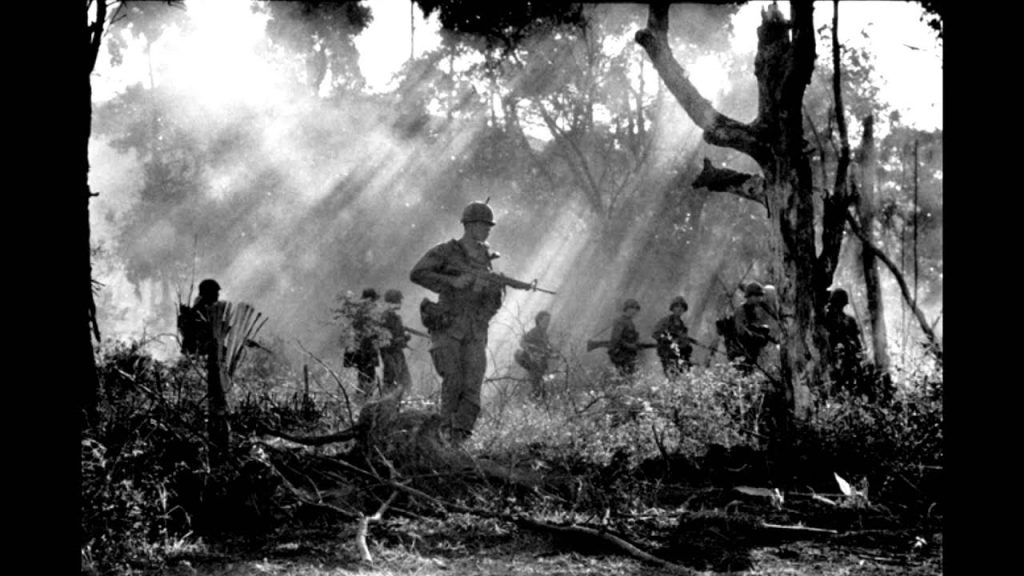 The year is 1945 and finally WW2 comes to a halt. Japan has decided to withdraw their forces from Vietnam as the Axis have lost the War. However, the country is still under French colonial rule since the 19th century.

Political leader, Ho Chi Minh has taken inspiration from Chinese and Soviet communism and has formed VietMinh – the League for the Independence of Vietnam. Ho has taken the opportunity to seize control of the northern city of Hanoi and has appointed himself as president of the Democratic Republic of Vietnam.

Whereas French-backed Emperor Bao has set up the State of Vietnam, with the southern city of Saigon as its capital, in the hopes of regaining control of Hanoi.

Both sides want the same outcome: an undivided Vietnam. But whilst Ho and followers want a nation inspired by other communist countries, Bao and his supporters want Vietnam to have economic and cultural ties to the West.

The cold war was still fresh in the minds of Americans at the dawn of the Vietnamese war. It seemed that these extreme conflicts following WW2 were mainly over a difference of opinion on how countries should be run. America was quick to help southern Vietnam in the fight against their northern counterpart. The United States hatred towards the Soviet Union was pretty strong as they put in place policies against any allies of the Soviet Union. By 1955, US president, Dwight Eisenhower had pledged his substantial support of Southern Vietnam.

There were a variety of tactics used by both southern and northern Vietnam, as well as Americans, during the 20 years of war. You had bombings, escilations, air artillery, Guerilla tactics, search and destroy etc. But one ploy used was Operation Wandering Soul. Despite southern Vietnam eventually losing the war in 1973, this bizarre American tactic was extremely successful.

On the night of February 10th, 1970, Viet Cong soldiers were concealed deep within the province Haoniga in southern Vietnam. Then suddenly, funeral music and high-pitched wailing was heard, coming from the skies.

Naturally, these voices were not real cries for help from Vietnamese soldiers in the afterlife, however, it was definitely the intention. Several ‘ghost’ tapes were manufactured by US forces as part of a psychological warfare strategy that we know as Operation Wandering Soul. The intention of this was to terrorize and weaken Viet Cong soldiers’ morale, forcing them to flee from their position.

US engineers, in the US army’s 6th psychological operations battalion, spent several weeks recording creepy sounds and modifying voices, claiming them to be slain Viet Cong soldiers. They recorded the voices using southern Vietnamese men over the tape to clarify further authenticity. Ghost Tape No.10 was played on loudspeakers in the areas of Viet Cong activity, usually overnight. Helicopters were also deployed, mounted with LRADs, to broadcast the recordings.

The pre-recorded voices would say to their “descendants” that they are suffering in hell and that all soldiers were to stop fighting.

Many American soldiers believe that this wouldn’t work as it was an obvious attempt to scare the Viet Cong. Although they mostly saw through the ruse, Wandering Soul still managed to demoralise and horrify the opposing soldiers, as well as their own (a psychological double-edged sword, if you will.)

The reason this operation worked so well is because the Vietnamese are very superstitious. In Vietnam, they believe the dead must be buried in their homeland, or their souls will wander the earth aimlessly, suffering and writhing in pain. If a deceased Vietnamese person’s bones are not cleaned and reburied, as traditions rule, the soul will wander the earth for eternity.

The folklore goes that a young Vietnamese boy, Kien Muc Lien, reached enlightenment from a very young age. Whereas his mother was evil and when she died, she was convicted to spend eternity tormented by ghosts and demons, in pain from never-ending hunger. However, Kien, being enlightened, was able to magically send food to his mother in the afterlife. The demons were enraged and set the food aflame before she could eat it. In retaliation, the son asked Buddha to help him care for his mother. Buddha suggested holding a special ceremony, which Kien dubbed as “Vu Lan”-Wandering Soul. He prayed for his mother and asked for her sins to be acquitted; his wishes were granted.

Vietnam celebrates Vu Lan Day on the 15th day of the seventh lunar month, every year, which includes many ceremonies to help wandering souls.

To this day, the Vietnamese government has claimed that an estimate of over 300,000 of its soldiers’ remains are unaccounted for from the Vietnamese civil war.

A poet and war veteran of the name Nguyen Du wrote “strangers have buried you in careless haste. No loved ones near, no friend, no proper rights. And under the one moon, no kindly smoke of incense burns for you”.

For years, family and friends of the lost deceased soldiers, searched for their remains in the hopes of giving them a fulfilling burial, wishing that they wouldn’t become wandering souls.