No Brand’s Land: Corporate Politics and How Justice Sells 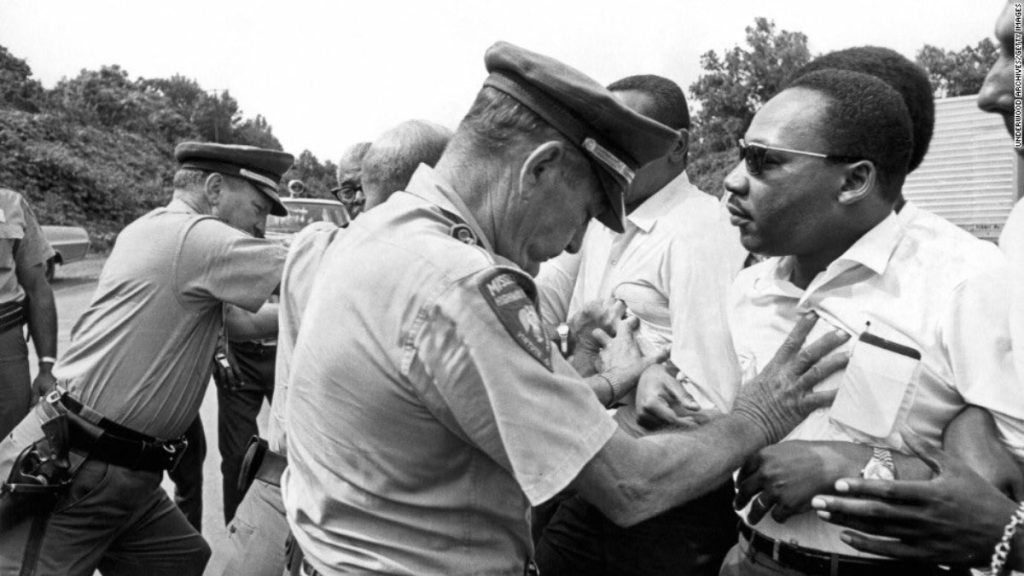 There’s a Riot Goin’ On

It’s a beautiful day for revolution. Protesters are converging on a busy American sidewalk. It could be New York or New Year. People hold banners and slogans aloft, while others clutch instruments. From a nearby café, some upmarket metropolitan-types sip their drinks and watch the protest, insulated from its cause. Eventually the crowd reaches a line of stoic-faced police officers. The crowd dances, pops and jives in the face of the policemen who stand motionless, arms crossed.

A young woman in double denim rushes to the front of the crowd. In her hand, is a can of Pepsi. She smiles and offers it to a stone-faced policeman. He examines the can and pops the ring pull. He takes a sip and then smiles cheekily, as if to say, ‘not bad’. Peace at last! The camera cuts to the faces of rapturous protestors, smiling and cheering, walking behind the messianic double denim lady. But, who is this mysterious vigilante?

This wasn’t footage from Ferguson, Baltimore or even Occupy. If you didn’t already know, the lady in denim was reality star, Kendall Jenner and the ‘protest’ was a 2017 Pepsi commercial.

Inspired by Black Lives Matter protests, it has the spirit of Tiananmen Square with about as much rebellion as a corporate training day. When it aired, the Pepsi advert was poorly received and a social media backlash ensued, with most of it aimed at the star of the video. But is Jenner the problem? Or should we be showing our contempt towards a brand using justice to sell sugary drinks?

Bernice King, the daughter of Dr. Martin Luther King, directly responded to the commercial by tweeting a picture of her father before a line of policemen, with the caption: ‘if only Daddy would’ve known about the power of #Pepsi.’

Primark and No Brand’s Land

For the last two years, Primark have partnered up with Soccer Aid, the charity football match where you see Mourinho lunging at Olly Murs to eradicate world poverty. It’s strange seeing Primark as philanthropists, especially when you consider Primark’s use of child refugee labour camps or their ties to Rana Plaza – the Dhaka garment factory which collapsed in 2013, killing 1,132 people and injuring over 2,500 in the worst ever industrial accident.

Token gestures like this, or Primark’s pledges to being carbon neutral, are to show development, or to coin a phrase popular on social media: it shows they’re ‘doing the work’. As the relationship between companies and society shifts, huge businesses can’t afford silence on social justice. Consumers therefore expect the radicalism that used to come from Art, to also come from brands.

A 2018 survey by Edelman’s Earned Brand Study found that 57% of consumers will boycott a brand because of its stance on certain issues. Because of this, brands are more image-conscious than ever before. Mark Renshaw, of Edelman, pointed out that brands who fail to take a stand on certain issues, are at risk of ending up in ‘No Brand’s Land’.

H&M, Tesco, Primark, Walmart, Zara have all issued statements on social issues that range from environmentalism to racial equality. But, when all of these companies sourced from Rana Plaza and still continue to use unethical practices, how can their sentiments ever be taken seriously? As recently as 2018, research found that people making H&M’s clothes live below the poverty wage. Despite this, H&M have a charity foundation, billed with the tagline: ‘a catalyst for positive change’.

In 2017, a heartbreaking story emerged that clothes from Zara were found to have messages stitched inside the clothes, saying things like, “I made this item you’re going to buy, but I didn’t get paid for it.” In June 2020, Zara posted ‘we stand for equality’ on Instagram. But not equality for their workers it seems.

This is a good example of what the philosopher, Robert Pfaller, called ‘interpassivity’: the commercials think and rebel for us, allowing us to consume with a clear conscience – because we know the brand must be doing the right thing.

Are Companies Beyond Redemption?

Advertising can be a powerful tool for representation of different minorities, genders and sexual orientations. Adverts are beamed into the homes of millions of people, so they can be beneficial for increasing the number of BIPOC faces on our screens. In 21st century society, adverts are inescapable. And so, when the 14 year-old actor from John Lewis’ 2021 Christmas advert received complaints and social media abuse for being ‘too diverse’ – it’s clear that brands can challenge perceptions. Whether companies want to challenge perceptions about society or themselves is another matter entirely.

You could argue that a company like, say, Primark, are using Soccer Aid to atone for their mistakes. After all, when a company is making billions in profit, it’s only right this money is redistributed. But can brands make mistakes? Not really. People make mistakes; companies don’t. Primark’s social-media team may be well-meaning graduates that think they’re making a difference, but the marketplace is a world away from the thousands of families torn apart by industrial accidents, like Rana Plaza.

A can of Pepsi won’t bring those people back, but it might make you thirsty.

This piece isn’t to say that brands are beyond redemption or that adverts watched by millions of people can’t facilitate changing attitudes towards marginalised groups.

This piece is just a reminder of what they are: adverts.