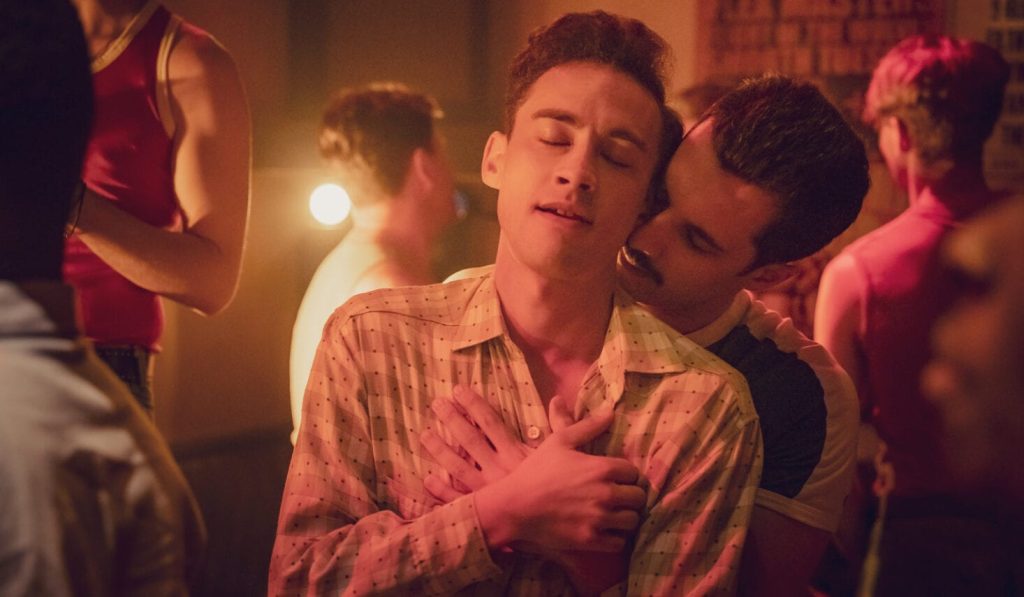 It’s a Sin was pitched to both BBC One and ITV, both of whom declined it. The show’s uncompromising subject matter, regarding the 1980s AIDS epidemic among gay men, was considered too hard to sell. Channel 4, its eventual distributor, shortened the length from eight episodes down to five. Writer and executive producer Russell T. Davies even noted that the night before release, due to the ongoing COVID-19 pandemic, he received a call from Channel 4 saying that they were proud of the show regardless of how poorly it was expected to perform. The cards were stacked against It’s a Sin at every level.

Within a few weeks, it was All4’s most binge-watched show of all time.

The limited series follows a gay friendship group from 1981 through to 1991. Singer-songwriter Olly Alexander (also known as Years & Years) plays Ritchie, an aspiring actor. He meets disowned runaway Roscoe (Omari Douglas), apprentice tailor Colin (Callum Scott Howells), and student Ash (Nathaniel Curtis), five young gay men working or studying in London. Davies has stated that he “wanted to create a safe space where gay actors could voluntarily come in and be themselves.” There’s also Jill, played by Lydia West, the glue holding this bizarre group together.

It’s a Sin starts off appearing as a run-of-the-mill coming-of-age series – in one way or another, the ensemble all leave their old lives behind and their paths diverge on a flat in London they dub the ‘Pink Palace’. Ritchie, a closeted gay teenager leaving for university on the mainland, smirks behind his father (Shaun Dooley) Clive’s back. He throws a pack of condoms into the ocean. But there’s an iceberg on the horizon – it’s important to remember that before the AIDS crisis, gay men would often have intercourse without protection. HIV – and later, AIDS – is a retrovirus that can be contracted via unprotected sex. It was the belief, here signified by Ritchie, that gay men didn’t need condoms. Who’s at risk of getting pregnant? Symbolically, he’s already confirmed his own fate. He’s too clever for his own good.

Davies is a master of writing tragedies. Weaker endings of his, such as Cucumber (2015) and Years and Years (2019), are those that typically end with a triumph that never quite rings true. His writing is at its best when there’s a clear end in sight, and it’s not a happy one. In such a small, introductory, tongue-in-cheek moment for the protagonist, Davies dooms him to five episodes (and ten years) of highs, lows, and a gravestone at the finish line.

Not once is there a development in the story that doesn’t shatter your world along with theirs. They’re just such a young, optimistic, and fun-loving group of people. Their pitfalls should be heartbreak, hangovers, and unpaid rent. Instead, they ultimately face sickness, discrimination, and death as the result of their limitless youth in an uncaring world. It’s not fair. That unfairness of it all – based on real stories from Davies’ youth during the epidemic – is the tragedy at the heart of It’s a Sin. It would be wrong to say that Davies dwells on the lows more than the highs, however. The main ensemble is such a beautifully conceived and casted group; loud-and-proud Roscoe embarks on an illicit affair with a Conservative MP (Stephen Fry) within Thatcher’s government. A highlight of the entire series, from Episode Four, is when Roscoe stands mere feet away from Thatcher – revealing that he’s urinated into the teapot reserved for her and her team. It’s a glorious moment, radical and hilarious in equal measures. Who can blame the man?

Colin, the sheepish Valleys boy, appears too intimidated by sex to even try it. Howells’ performance, with those wide-eyes and that ‘just happy to be here’ demeanour, deserves unending praise. His innocence, warmth, and calm nature are contrasted with the vibrant confidence of Ritchie and Roscoe. So of course, Colin had sex in secret. Of course, Colin gets sick. It’s a testament to the standard of writing on display that his tragedy is entirely obvious yet impossible to see coming. Everything feels so homely in the first few episodes. Alongside the characters, you’re put into a state of wilful ignorance.

“Do you seriously think there’s an illness that only kills gay men? It can calculate you’re gay and kill you, but no-one else? What about bisexuals? Do they only get sick every other day?”

There’s a deeply humanising moment in Episode One for Ritchie. At a party, he enters in drag as ‘Rachel’ and silences the room. He’s going to sing a song, he says. There’s a moment of silence. And then – La! He gives a single note and the room bursts into laughter. Very rarely are funny moments in fiction genuinely funny, nor do they particularly feel like something people would laugh at in reality. But Ritchie’s “La” is one of the most sincerely funny pieces of writing and acting I’ve seen on TV for a long time. The line becomes an in-joke with the group, and the audience – the Pink Palace is almost masterful as an engagingly realistic portrayal of a friendship group. They’re impossible to forget.

What else is impossible to forget is that It’s a Sin is still ostensibly a drama about the AIDS epidemic. It looms over not only the first two episodes, but much of Davies’ writing on gay life prior. Queer as Folk was radical in that it didn’t mention AIDS, but it still ticks away in the background a good decade after the fact. Much of Henry’s fear of intimacy in Cucumber developed from being in the same position as these protagonists – it’s easy to imagine Colin growing into similar worries had he been given the chance. But for the first time, Davies’ confronts the period head on.

Ritchie dies in 1991; the same year that Freddie Mercury passed away. Ritchie’s clever, but he’s not very smart. He refuses to believe that AIDS exists until he has it. He refuses to get tested for years. He refuses to tell his friends until it’s almost too late. He doesn’t tell his parents that he’s gay, let alone that he’s sick, until visibly on his deathbed. Circumstance was cruel to Ritchie, Colin, and Gloria – and it was cruel to the 33 million people who have died of AIDS-related illnesses since the early 1980s. In 1992, HIV was the leading cause of death among 25–44-year-old men in the United States. The statistics are shocking regardless, but there’s no better example of how AIDS affects people (and specifically gay men in the 80s) than It’s a Sin.

AIDS in and of itself doesn’t kill. It simply weakens the immune system, meaning that common illnesses or rare cancers that should be easily fought off tend to be the cause of death. “Colin the Virgin”, though, develops dementia towards the end. Descriptors like gut-wrenching and heart-breaking are used so often in regards to drama that they’ve lost the impact they should invoke. He’s been arrested under the Public Health Order and confined to a hospital bed – waiting to die. As Ritchie and Jill sit by his bed, a delirious Colin reveals that he always fancied Ritchie. He starts to masturbate under the covers, as his mother watches. There aren’t words that can even begin to indicate what it’s like to watch, let alone experience in reality.

I’ve spent over a thousand words writing about It’s a Sin, but in reality, there aren’t enough of them in the dictionary that equate to the experience of watching it. ‘Important’, or ‘gripping’, or ‘devastating’ hardly do it justice. It’s an ineffable piece of art, glorious in its writing and characters. It’s gloriously loud and proud, respectful of a history that’s often wilfully forgotten, and irreverent towards almost everything else.

La! It’s a Sin is available for streaming on All4 and HBO Max.