Meditations on Hell: An Interview with Thank 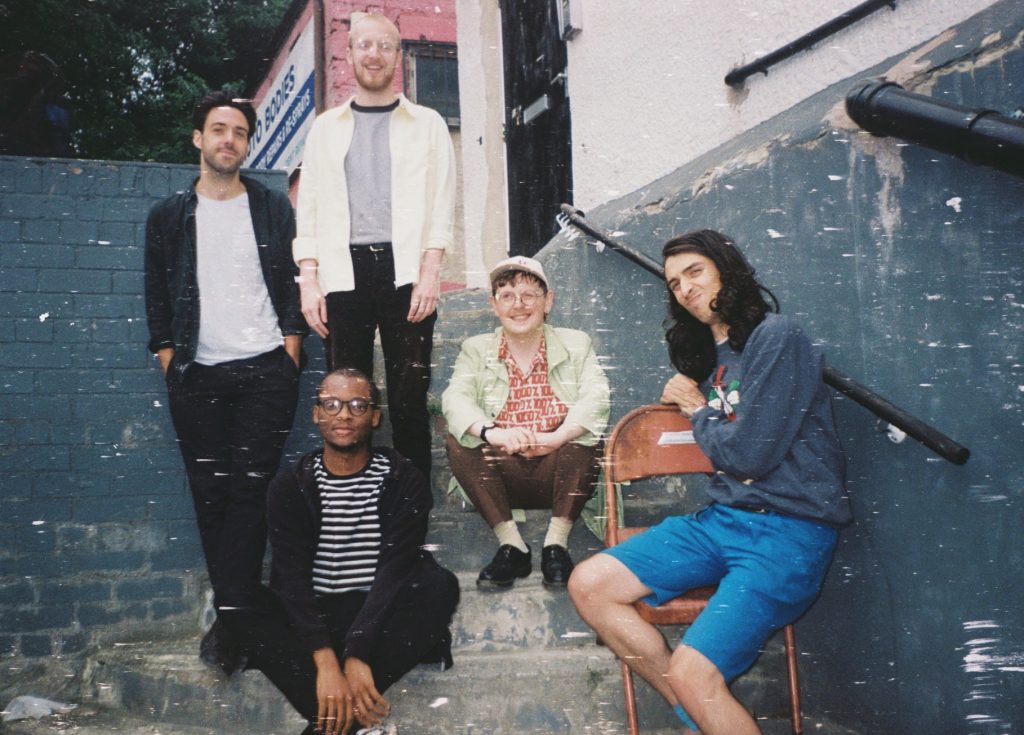 Somewhere in the 16th century, Saint Ignatius of Loyola wrote a prayer manual called Spiritual Exercises. It was a collection of meditation tasks designed to make you closer with God. Freddy Vinehill-Cliffe, from noise-pop band Thank, found himself reading Loyola. But it was one particular chapter that stuck out; one that gives you a guided meditation through hell:

It’s not far from the techno-colour world of Thank. Their debut EP, Sexghost Hellscape, is a world punctuated by pneumatic drill basslines, dial-up internet synths and self-abusing vocals, kicking and screaming like a Ralph Steadman drawing come to life. Constantly testing their own extremity, it’s tightly packed with lyrics like: ‘this is the treasure chest in which I keep remnants of teeth ground down overnight into a fine paste’.

They are a band best described by their own mantra: ‘stupid music made by geniuses’. It’s an attitude bolstered by the band’s addition of self-professed ‘stupid musician’, Theo Gowans – a successful noise artist in his own right – who performs under the name Territorial Gobbing. He’s released hundreds of albums on Bandcamp and uses his Thank privileges to add layers of texture and fragments of musique concrète. In Thank’s live shows, Theo plays wind-up teeth, slinkies, kitchen forks, and an array of other strange, synthesized curios. But when deployed in the studio, he is the Underground Man; the Brian Eno to Freddy’s Bryan Ferry.

‘Most of the album was recorded in the studio, but 90% of Theo’s stuff, he did at home in his cellar. He’s got a cellar filled with noise making gear, random objects, tape machines, and weird junk. So, he was able to spend as long as he wanted just layering textures.’

The new album in question is Thoughtless Cruelty. It’s influenced by Saint Ignatius as well as CNN’s Turner Doomsday Video, an eerie clip recorded by CNN to play when the world ends (I had no idea this was something that existed). The album shows a shift in lyrical focus as Thank look outwards and realise that Hell is other people. Whereas Thank songs are typically grounded by Vinehill-Cliffe throttling himself from every angle, Thoughtless Cruelty is more about collective experience.

‘I’m trying not to wallow to the same extent. The new album is still quite bleak. I think it’s less wallowing and self-pitying. Although it does have some internally focused stuff […] a lot of it is more about community rather than the self.’

Whilst the pandemic forced society into disconnect, Freddy found community in religion. After moving back to his hometown, he found himself taking an interest in the Jesuit church and ‘fell down a rabbithole’ of ‘spiritual confusion’.

‘There’s a lot of stuff on [Thoughtless Cruelty] about spiritual confusion. I moved into a house about 200 yards away from the church that I went to as a kid and it became a framework to hang a lot of the album on. It was a weird, semi-religious re-awakening that I had. I don’t wanna accidentally take Covid into the church and kill some pensioners, but I am intending to start going to church on a Sunday – just for the ritual of it; reconnecting with my childhood in that way.’

There’s certainly a childlike element to Thank’s music. But not in a whimsical, Syd Barrett-esque sense; more of a toddler having a tantrum in the supermarket kind of way. It’s a rage that burns through every synth gurgle and vocal shriek.

It was the synthesized elements that first drew me to Thank, but the band used Thoughtless Cruelty to move their sound away from electronica, bringing guitars through the fire and flames.

‘[Thoughtless Cruelty] is more chaotic, just by virtue of having another guitar in the mix. Neither me, nor Lewis, play in a standard rock way. The fact we’ve allowed ourselves to be like ‘we can do stuff if we want, it’s rock n roll baby’. We’ve made enough weird music that even if we did a straight-up AC/DC song, people would know that’s not all we’re about.’

Whilst their newer material definitely shows that Thank can certainly rock, the electronic elements of their sound still reign supreme. Their politically charged single, ‘Good Boy’ has an electric pulse that bounces like a space hopper, with all the subtlety of a sledgehammer. It’s a rowdy and desperate slice of Gilla Bandian noise-pop which recently received praise from YouTube music critic, theneedledrop – a fairly big deal for young bands, particularly English ones.

I can’t help asking about it.

Typically when answering questions, Freddy ponders and chooses his words carefully, like he’s been withholding a great secret. But this time, he shrugs. ‘The universe works in mysterious ways.’

Thoughtless Cruelty is out 4th February on Box Records:

The band’s UK tour commences in Leeds on the 9th February, followed by dates in Brighton, London, Bristol, Newcastle, Glasgow, Sheffield and Manchester.