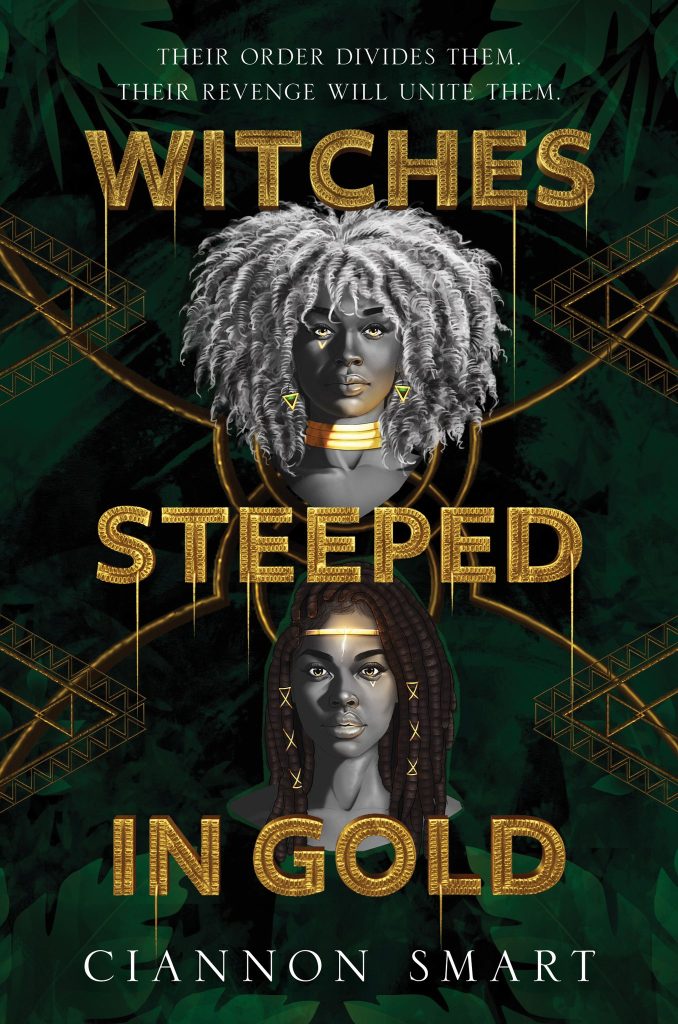 Ciannon Smart’s debut novel Witches Steeped in Gold is a young adult fantasy novel with a basis on Jamaican and Caribbean folklore.

Witches Steeped in Gold follows two enemy witches who are forced to form an unlikely alliance in order to take revenge on the Queen of Aiyca. Irya, one of the two leading characters, is the heir to the overthrown and enslaved people, the Obeah, who have the ability to use magic naturally. Her family was killed and she was exiled from her home as a child, so of course, she’s not too happy about that. She wants freedom and above all, revenge. The second lead, Jazmyne is the queen’s daughter and her people the Alumbrar, unlike the Obeah, must use magic via conduits. Jazmyne was seen as a threat to her mother’s rule and wants to overthrow her as she disagrees with how she rules over the land and people. Jazmyne’s also part of a rebel group who plan to assassinate the Queen, and when she learns of Irya’s existence, she plans to use her in order to help eliminate her mother. Irya begrudgingly goes along with Jazmyne’s plans whilst forming schemes of her own.

First, the good. Witches Steeped in Gold has a fantastic and lively setting with interesting worldbuilding. Shamefully, I didn’t know much about Caribbean folklore despite having Jamaican heritage, but I learned quite a bit about Jamaican fairy tales and folklore because of this book. It opened me to a new world of fantastical Caribbean myths and stories, and I intend to learn more about it. The magic system in this book is also consistent and makes sense which is a plus, especially for these kinds of stories that are more plot-driven rather than character or theme-driven. I could never quite guess what was going to happen next in the story, and the ending was surprising and intriguing, making me quite excited for the next book in 2022. Irya was another good part of this book, being spontaneous and even reckless. I found myself very interested in her as a character and sympathised with her inner turmoil.

Now for the not so good; whilst I found Irya’s character to be interesting, I can’t say I felt the same about Jazmyne. To be honest, I found her rather dull, especially in the middle part of the book because whilst she had a sense of mystique at the beginning, that eventually wore out, and I became less and less interested in her side of the story and found myself anticipating the Irya chapters more and the appearances of more interesting side characters like Anya. Jazmyne also undergoes quite the dramatic character development towards the end of the story, which in my opinion came off as quite forced and too much of a drastic change to be realistic to how people are. Other than Jazmyne, the pacing of this story was quite a big issue too. It starts off like most YA books with a fast-paced impactful, action-filled beginning but quickly slows right down. What you start a book with essentially sets the tone and pace for the rest of the story, or at least it should, in ideal circumstances. Although with its beginning Witches Steeped in Gold promises an exciting and fast pace, which for me is a nice break from heavier themed and slower-paced adult fantasy books, it did not keep up with this pacing throughout the book. The middle part of this story really slows it down and is a huge contrast to the beginning, and I found myself having to drag myself through it, especially through the Jazmyne chapters. Despite this, things pick up again towards the end of the story, and it has an interesting ending and set up for the next book.

Overall, I like this book, and I would rate it a 6/10. Worth a read if you’re specifically interested in fantasy and want alternative settings to the regular medieval one. But it does have flaws, and I wouldn’t recommend it to everyone, especially people who lose interest easily and aren’t used to slower-paced stories. I’m excited to read the sequel book to Witches Steeped in Gold which should be coming out in 2022!