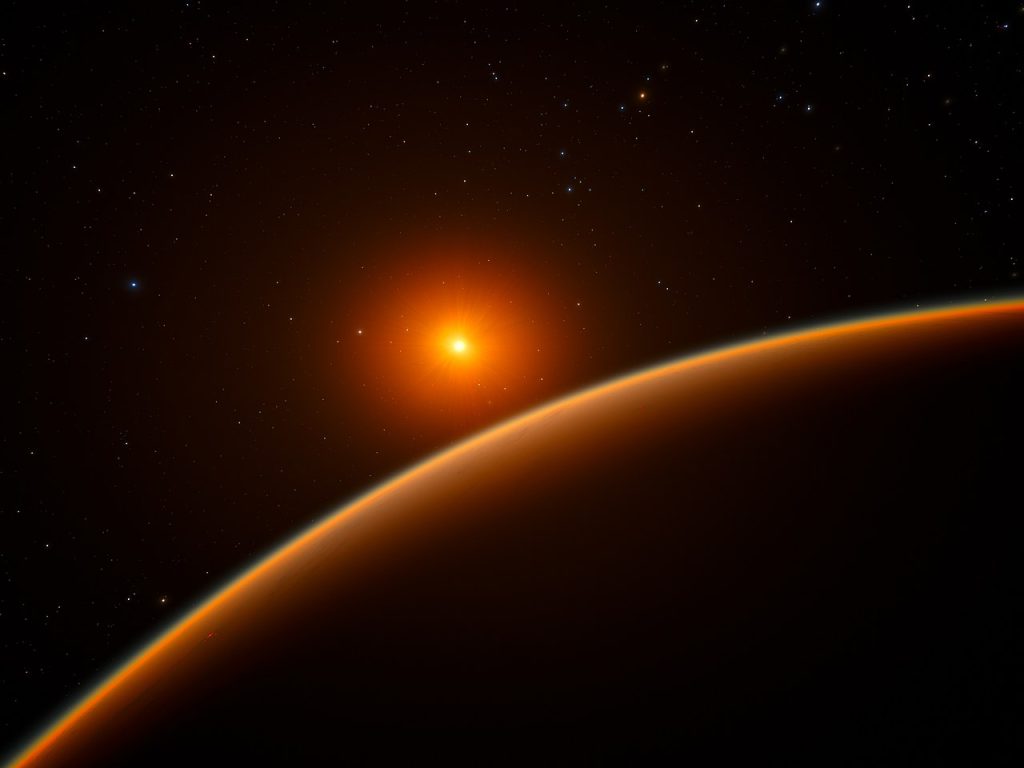 Space can be super weird and mysterious sometimes but also incredibly fascinating, with things that twist our understanding of physics and make the impossible possible. I’m a big space nerd and love learning about new planets and galaxies in the universe, and so I made a list of all my favourite planets (and one moon) to show how insanely cool space can be!

GJ 581c is an exoplanet that orbits the Gliese planetary system and is classified as a super-Earth (a planet with a mass greater than Earth’s but less than our own solar system’s ice giants, which are 14.5 and 17 times Earth’s mass). The planet was originally thought to be similar to Earth as it’s in the habitable zone of its star and has the right temperature to house liquid water, however it was found to be tidally locked, meaning only one side of the planet faces the star it’s orbiting, and vastly reducing the chances of life on it. The reason this planet’s cool is the temperature on both sides are drastically different, the exact temperatures are still unknown but if you were to stand on the side that faces the star, you’d be instantly melted alive, and the side facing away you’d be instantly frozen to death!

A digital radio message was sent to the planet in 2008 in which the signal will reach in around 2029.

CoRoT 7b – Where it rains molten rocks

An exoplanet orbiting the star CoRoT-7 which only takes around 20 hours. As well as being a super-Earth, the density on this planet is around the same as Earth’s meaning it’s a terrestrial planet rather than a gas planet like Jupiter. It’s possible that it’s covered in lava and the density of the planet means it’s probably a rock planet, like Earth and Mars, and it’s thought to hold around 40% water in forms of ice and/or vapour. The cool yet terrifying thing about this place is that due to it being tidally locked, like GJ 581°C, it rains rocks! The hot side will vaporise rocks creating rock clouds, then rain a liquid-form of rock which will cool down and harden in the high atmosphere and create a rock-rain by the time it hits the surface again.

HD 189733b is an exoplanet orbiting the star HD 189733 and possibly my favourite planet on this list! The mass on this planet is 16.3% higher than Jupiter’s and has a radius of 13.8% greater, and with an orbital speed of 152.5 kilometres per second it’s unlikely to house extra-terrestrial life. Now the reason this planet is cool is because it rains glass sideways! The winds on this planet are made up of silicate particles and can get up to 8,700 kilometres per hour (or 7x the speed of sound), which launch molten glass into the atmosphere creating a glass rainfall but instead of falling down, the wind hurls it sideways.

Now I know this isn’t a planet, but I thought it was too crazy to miss out! This moon is strikingly similar to Earth with stable bodies of surface liquid and rain that falls – like on Earth. It’s commonly described as a planet-like moon due to it being 50% larger than Earth’s moon and 80% more massive, whilst being the second largest moon in the solar system and is mostly made up of a rocky core and various layers of ice. The reason this place is cool is because the atmosphere is so thickly made of nitrogen that the surface wasn’t able to be captured until 2005, of which it holds dunes, rivers, and lakes all alike to Earth and its seasonal weather patterns, although at a much lower temperature of -179.2°C.

An exoplanet that orbits the star Gliese 1214 and, similarly to GJ 581°C, is also a super-Earth. As of now, it’s theorised that it’s most likely an ocean planet with around 75% mass of water and a core of 25% rock. The reason GJ 1241b is cool is that if it is scientifically proven to be a water-world it could be thought as a bigger, hotter version of Jupiter’s Galilean moon Europa. Due to the possible varying pressures on this planet, there could be a wide variety of water types such as superfluid, high-pressure ices, and a solid-phase ice in the form of ice vii.

This planet is classed as a hot Jupiter (a class of giant gas exoplanets that are thought to be physically similar to Jupiter but have shorter orbital periods) and only takes just over one Earth day to orbit its star. Similarly to previous planets Wasp 12b is tidal-locked, but the heat from the ‘day’ side is transported by the strong winds to the ‘night’ side, evening out the overall surface temperature to more than 2,200°C. However, my favourite thing about this planet is that due to its closeness to its star, it becomes distorted into an egg shape and is pulling away from its atmosphere, as well, instead of reflecting light it absorbs at least 94% of the light that reaches its surface.