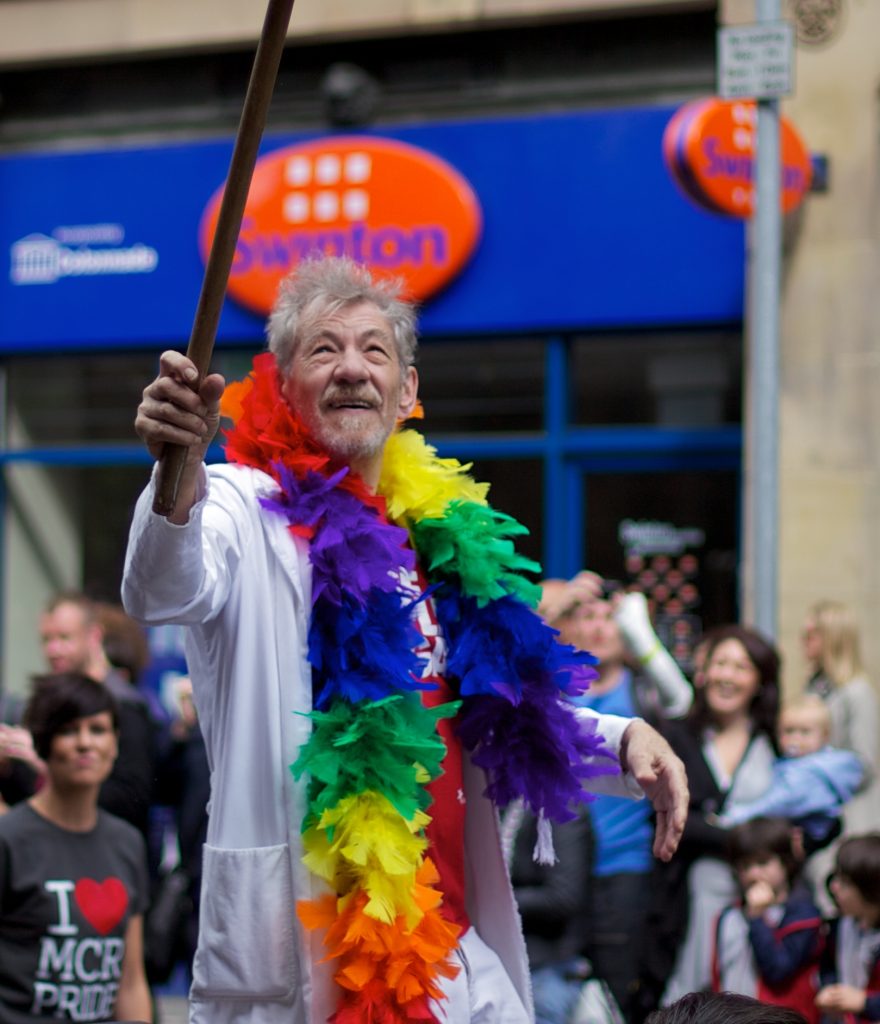 Our fair island is home to many talented actors, and a good few of them are LGBT+. It would be impossible to list all of them here, so apologies if your favourite doesn’t appear, or to rank them, as they are all fine actors. Nevertheless, here is a pick of some of our finest. There are some that you have definitely heard of, and maybe a couple that you didn’t know about!

Pearl Mackie has appeared in TV shows like the long-running soap Doctors and Friday Night Dinner, but she is best known for her stint on Doctor Who as Bill Potts, the loyal and funny companion to the Twelfth Doctor (Peter Capaldi). Whovians will remember that Bill was gay. In Bill’s debut episode, she was given a female love interest, Heather, who turns out to actually be an alien creature. However, you might not know that Pearl Mackie is herself bisexual, as she revealed in a 2020 Instagram post.

If you’ve heard of one person on this list, it’s probably him. Sir Ian McKellen has had a prolific career on stage and screen. Most people recognise him as the wizard Gandalf the Grey from The Lord of the Rings trilogy, for which he received an Oscar nomination, but he has also won 7 Olivier awards. As if those weren’t enough, McKellen has also found the time to be an activist for LGBT+ rights. This started when he publicly came out in 1988. Part of his reason to come out was the proposal of the controversial Section 28 law. This law prevented local authorities from promoting homosexuality “as a pretended family relationship”, and ended up being in effect until 2003. McKellen is also a co-founder of the charity Stonewall and a patron of Pride London and LGBT History Month.

Russell Tovey has been in many films and TV shows, including The History Boys, Being Human, and Gavin and Stacey. The openly gay Essex-born actor has also been in plays, including the Olivier-winning 2017 staging of Angels in America, where he starred alongside Andrew Garfield (if you want to see how he did, the show is on The National Theatre’s streaming service NT at Home), and was even a guest judge on the latest series of RuPaul’s Drag Race UK.

Cara Delevingne is best known for her modelling and film career, appearing in Suicide Squad and the film adaptation of the John Green novel Paper Towns. But did you know that Delevingne identifies as pansexual and genderfluid? Delevingne was nominated for LGBT+ Celebrity at the British LGBT Awards three times and, like Russell Tovey, was a guest judge on RuPaul’s Drag Race.

This Scottish icon has appeared extensively on both the stage and screen. He received a Tony for his performance in Cabaret and starred alongside Daniel Radcliffe in the 2020 play Endgame. His most well-known TV role was on the legal drama The Good Wife, for which he was nominated for several awards, including multiple Golden Globes. Cummings is bisexual and an active campaigner for LGBT+ rights, having been honoured by GLAAD and the Trevor Project, and was appointed an OBE for his services to film, the arts and LGBT+ activism.

Since 2015, Annie Wallace has played Sally St Claire in Hollyoaks. In doing so, she has made history by being the first transgender person to play a transgender character in a British soap opera. Wallace was nominated for a BAFTA in 2016, making her the first trans actress to do so, and last year she was given a Judges Award for Outstanding Trans Activism at the Proud Scotland Awards.

Miriam Margolyes is a mainstay of British TV, film and theatre. She has been in the Harry Potter films as Professor Sprout, Call the Midwife, and the original West End production of Wicked. She is openly lesbian and has been with her partner, Heather Sutherland, since 1968. Margolyes is known for her cheeky sense of humour and is often featured on talk shows sharing naughty anecdotes. Last year, she published her autobiography This Much is True.

Olly Alexander’s best-known acting role was on the critically acclaimed show It’s A Sin, which is set in the UK during the HIV/AIDS crisis. He also performs as a musician under the stage name Years and Years and is a vocal advocate for LGBT rights. In 2020 he won the LGBT Celebrity of the Year award at the British LGBT Awards.

Which of these actors is your favourite? Are there any iconic British LGBT actors that we missed? Let us know by leaving a comment!