Whatever Happened to the Westboro Baptist Church? 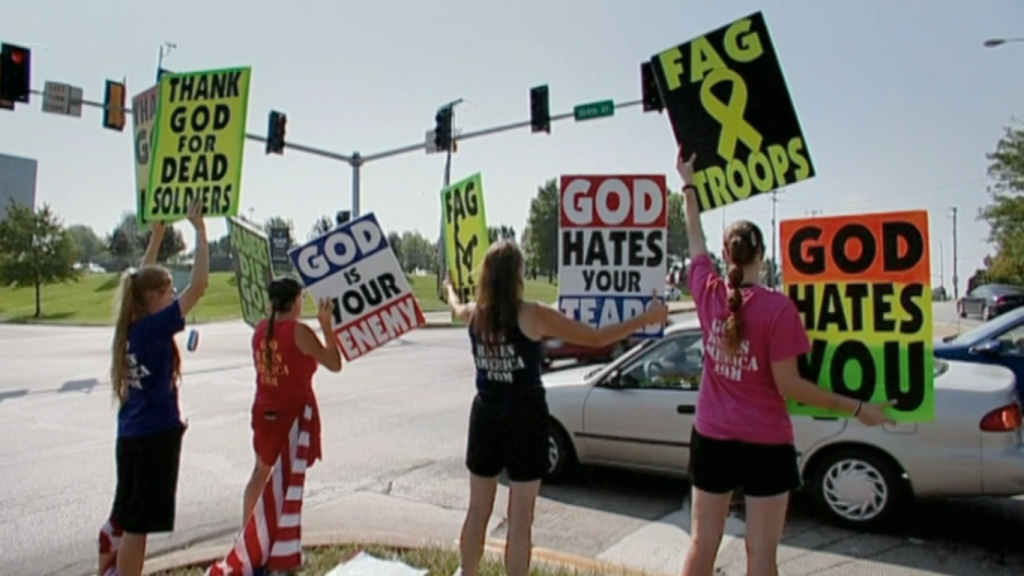 If you were active on the internet between 2004 and 2014, then you’re probably familiar with the Westboro Baptist Church. Infamous for their vehement homophobia, Islamophobia, antisemitism, and general insular hatred for anyone other than members of the church, the WBC were most known for their offensive picketing at funerals, universities, and any public event that caught their ire. Slogans such as “God hates f*gs” and “Thank God for 9/11” braced their signs outside the funerals of AIDS victims and Iraq soldiers. When Dr George Tiller, the Kansan physician who provided late-term abortions to women, was assassinated by Scott Roeder in 2009, 17 WBC picketers held signs with phrases such as “God sent the shooter” at his funeral.

The modern Westboro, originally an off-shoot of East Side Baptist Church in Kansas, was founded by pastor and lawyer Fred Phelps in 1955. Despite being involved in the 1960s Civil Rights Movement, Phelps and his church began ‘protesting’ homosexuality in 1989 after their discovery of a local ‘tearoom’ (a public toilet used for sex by closeted gay men). By the mid-90s, the WBC were protesting across the nation. Their apocalyptic vision of Christianity, which blames gay people for 9/11 and claims that “homosexuals and Jews dominated Nazi Germany”, is nonsensical at best; excommunicated members such as Lauren Drain describe the church as brainwashing followers and their children into these beliefs.

At the memorial for the 2006 Sago Mine disaster, in which an explosion at a coal mine in West Virginia trapped thirteen miners, killing twelve of them, the Westboro Baptist Church picketed and claimed the accident was God’s revenge against the United States for tolerating gay people. A strange obsession with homosexuality and a ‘doomed’ modern America runs strong through their end-of-days interpretation of the Bible. Only members of the church, predominantly made up of members of Phelps’ family, are seen as worthy of entering Heaven – everyone else, including, you, me, and Louis Theroux, is destined for Hell. You might expect such a belief system to be flush with extreme nationalism, but their hatred of Obama seems tantamount with their hatred of Trump.

In 2005, Sky employed hidden cameras and recorded two of Phelps’ granddaughters saying they hope no-one outside the church reaches Heaven, as they want everyone in the world to die horribly and burn in Hell. It’s the ultimate and illogical endpoint of Calvinism. Throughout the noughties, especially after the beginning of the Iraq War, the church became infamous for these pickets, as well as their bizarre parodies of pop songs. If you’re able to stomach the slurs and absolute sincerity of their cover of Let It Go, listen below.

After the 2008 8.0 Sichuan earthquake in southwest China killed roughly 70,000 people, Westboro prayed “for many more earthquakes to kill many more thousands of impudent and ungrateful Chinese”. International news reported their ministrations and demonstrations for almost a decade. Louis Theroux made three documentaries on ‘America’s Most Hated Family’; from the height of their activities in 2007, to the Crisis that dominated their family at the turn of the decade, and finally 2019’s ‘Surviving America’s Most Hated Family’, which documents the realities of the church in the wake of Fred Phelps’ excommunication and death in 2014, and the lives of its former members.

Reportedly suffering from a form of dementia in his final year, Phelps’ status as preacher and leader of the church was weakened as his mental and physical health worsened. And as mainstream culture moved its focus away from exploiting the hatred of groups such as the WBC in the 2010s, the doom that the church preached finally descended on them. It’s said that in 2013, Phelps stood before the ‘Rainbow House’ across the street – purposefully owned by the Planting Peace non-profit – and declared “you’re good people”. Whether this represents a change of heart or a declining mental state is unclear, but he was excommunicated quickly and cremated immediately after his death, without a funeral. Zach Phelps-Roper, Fred’s grandson and former member, said this would be considered “rank blasphemy” by the church.

Despite this, the Westboro Baptist Church seems set on their ministrations. Such an insular and cult-like society is unlikely to repent their insane beliefs – nor would such a change represent much in the grand scheme of the world. They have been undeniably quieter, and smaller, since the death of their founder, however. Theroux noted a subdued and drier atmosphere to their sermons, now lacking the fire and absurdity that helped Phelps initially found the church; during the presidency of Barack Obama, Westboro claimed he was a signal of the coming apocalypse, implying that he was “most likely the Beast spoken of in the Revelation.”

Nathan Phelps, Fred’s estranged son who claimed his father was physically abusive, left the church in 1976 and has been outspokenly against the church ever since. He is now an atheist, writer, and LGBT rights activist living in Canada, and often gives talks on religion and child abuse. Other former members such as Megan Phelps-Roper and Lauren Drain have established similar careers since leaving, giving talks and releasing books on their experiences. Other excommunicates, such as Zach Phelps-Roper, live quieter lives but denote comparable changes in beliefs. Danielle Phelps, Fred’s granddaughter and Nathan’s niece, is openly gay and a member of the US Marine Corps. Numbers are unclear, but over 20 members have left the Westboro Baptist Church since 2004 and have spoken out against the ministry – and this has undeniably had an effect on the organisation.

Megan Phelps-Roper appeared in ‘Surviving America’s Most Hated Family’ and cites social media as the cause for her lapse in belief, saying “it was conversations I was having with people on Twitter that first allowed me to see inconsistencies within Westboro’s ideology”. It’s interesting to note that, for all its controversies and issues, social media has always had the power to bring truth to light. Its utility as a tool of education and connection can’t be ignored. Regressive and insular systems of belief, such as those of the Westboro Baptist Church, are insignificant compared to the overwhelming realities of the outside world. The rising frequency of discussions and socio-cultural change brought about as a result of social media can (and does) have a positive influence on the world. The ‘Age of Information’, for want of a better phrase, has equal powers of healing and destruction for society.

In the same documentary, Shirley Phelps-Roper, Fred’s daughter, said tearfully of her children leaving the church “we don’t own salvation” and that “we go with the wisdom of God on all these matters, it doesn’t change the fact it’s sad and painful”. Religion is simply a human effort to understand the world, to understand the hurt and fear of life. On a humanistic level, while her children’s abandonment of the church has possibly strengthened Shirley’s belief in her actions, that would ultimately be an expression of the pain of losing integral parts of her family and her inability to change that.

More recently, the WBC have thanked God for COVID-19, calling it his “promised plague” from Deuteronomy 28:21 (“The Lord will plague you with diseases until he has destroyed you from the land you are entering to possess”). Their beliefs may not have altered, but the church is quieter and more subdued in the wake of Fred Phelps’ death. Small mercies, I suppose – at least we don’t have to listen to them anymore.