Terrible Language: An Interview with Perspex 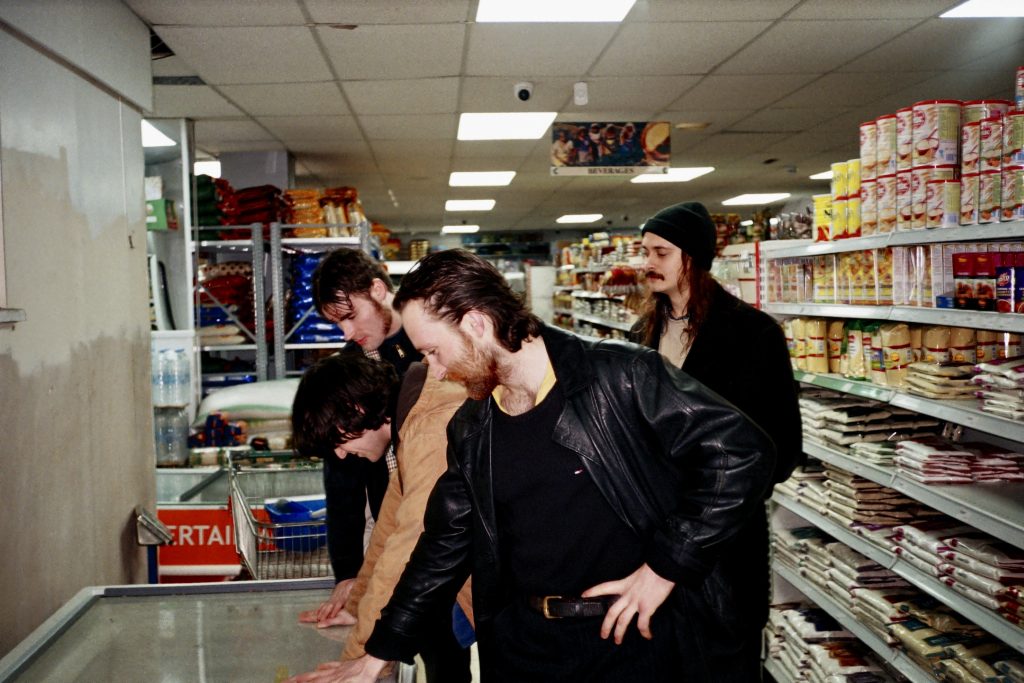 Forming a few months before Round One of Lockdown 2020, Perspex are a rare breed of band that, as mustachioed bassist, Ollie, points out, have managed to pick up momentum since the pandemic flattened any notion of a cultural landscape. Following a drip-feed of releases throughout the plague, the band have since ticked off shows with the likes of Sinead O’Brien and Personal Trainer, as well as an album release tour with Bull – who’d just signed a record deal with EMI.

For a band still in its infancy, Perspex demonstrate range and scope in their songwriting and facial hair. Today, their Fall-ian drummer, Lewis, dressed in full camo, is showcasing a mustache that links up to his sideburns. The band’s most-played single ‘Double Recovery’ has shades of Brian Jonestown Massacre with a heckin’ catchy chorus, whilst ‘A Horse Named Useless’ showcases more of an Americana influence; it’s like ‘A Horse with No Name’ if the song took place in deepest, darkest Yorkshire, swapping the desert for dry stone wall misanthropy and tables sticky with IPA.

Michael is the more outgoing member, a confident frontman and an engaging storyteller. ‘I like having Babestation on, it’s like having someone else there.’ His brief bursts of tragicomic introspection are often followed by tales of bravado and blue humour, laced with symbolistic tangents. When talking about the band’s new de-facto manager, George Chadwick, he smiles. ‘We’re contemptuous, annoying alcoholics. And we’ve finally found someone who speaks our terrible language.’

At live shows, Jack can often be found with his back to the crowd, knelt down in front of his amp, like he’s walked onstage and forgotten how he got there; a true anti-performer. But, it has its perils. ‘We don’t really like playing live — well, I don’t anyway,’ he says. ‘In Liverpool, we got incredibly pissed and I was crouching down for most of the gig. But I fell back off the stage and couldn’t get up.’ It’s a feat best described in his own words: ‘Perspex is an anti-life ring.’

For Michael, the band’s sonic homage to the Velvet Underground, Josef K and Spacemen 3 comes from an embrace of tradition; raiding the cooler side of their parents’ record collection to weave a patchwork of influence. ‘Something that’s lost on our generation is the importance of tradition and songwriting. People are too caught up in trying to be profound and experimental and intense and something that’s not been done before.’

But wasn’t it the experimentalism and the intensity which made Velvet Underground so radical? Before I have time to ask this, Michael has answered himself. ‘Oh, I’m contradicting myself now. I don’t know what the fuck I’m on about at all, but I’m getting to it; I’m getting there. It’s nearly there.’ We push on.

When going through the band’s recorded catalogue, I found myself wondering if music is the outlet for the more cynical parts of the band’s psyche. With all Perspex’s tales of glazed, paranoid shapeshifters and down-and-outs on the precipice of sanity, does Michael think of himself as a particularly gloomy writer?

‘A few years ago, I liked writing about those sorts of characters. That time, I was writing a lot about these characters who’re the most intense versions of the worst thoughts in my head. I was forming a network of characters who’re on the fringes of society – people with God complexes. I was fascinated by it. I was very into Baudelaire, Rimbaud, all the Beats. But I think my songs are actually quite hopeful; a beauty shines through them.’

Maybe it’s unavoidable to focus on the bleaker lyrics; it feels innate to look past humour and uplift. It’s part of being human that one bad decision can cloud a thousand better ones as doubt repeatedly plunges us back into darkness. Michael’s response brought me back to the closing line from Lester Bangs’ 1978 review of Van Morrrison’s Astral Weeks:

‘Desolation, hurt, and anguish are hardly the only things in life, or in Astral Weeks. They’re just the things, perhaps, that we can most easily grasp and explicate, which I suppose shows about what level our souls have evolved to.’

Or maybe we’ve all learnt to talk in Perspex’s terrible language.