The Unspoken Genius of Taskmaster 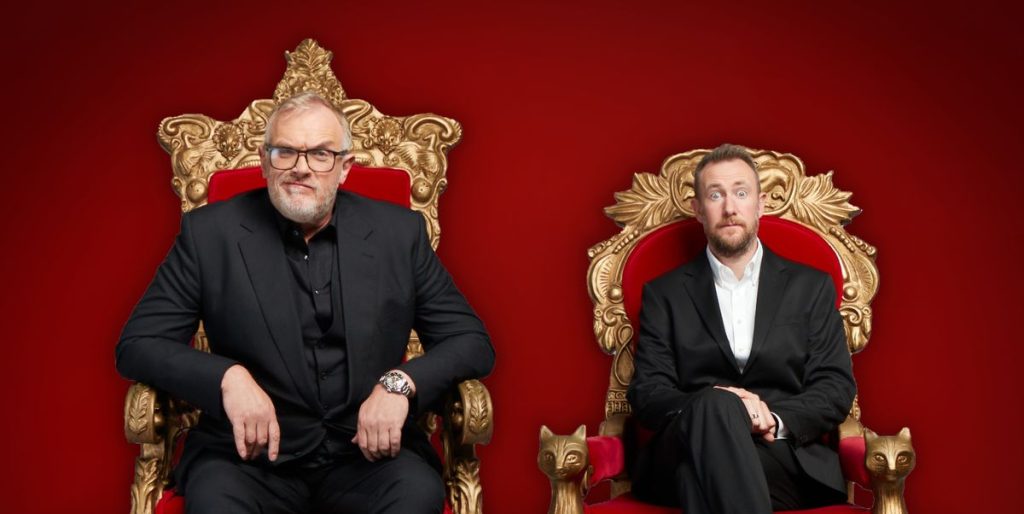 Comedy panel shows aren’t known for their ingenuity. Recorded in batches with a rotating cast of comedians, they’re usually built around a light structure that’s easy to understand at a glance. 8 Out of 10 Cats, Would I Lie to You, and Mock the Week all use this format well enough, namely as a vehicle for comedians at various stages of their careers to get some jokes in and get their face on the TV. Typically, you’ll find a host considered a ‘safe pair of hands’, such as professional humour vacuum Jimmy Carr. It’s the UK comedy equivalent of the gameshow – 8 Out of 10 Cats Does Countdown is just ‘comedians play Countdown’. In recent years they seem to have dominated the UK comedy scene, overtaking variety and stand-up shows such as Night at the Apollo. This isn’t necessarily bad, as panel shows are churned out at such a breakneck regularity that they’re bound to get it right a fair whack of the time – especially if involved is a comedian whose intention is to break whichever rigid format is at play.

And then in 2015, Taskmaster came along. In a nutshell, over the course of a few weeks, five comedians are set a series of absurd or seemingly-impossible tasks. Their efforts are filmed and judged in the studio by Greg Davies. At the end of the series, one comedian wins and is crowned the ‘champion’. Created by co-presenter Alex Horne, Taskmaster breaks from the panel show format considerably – there’s a lot more commitment on the part of the comedians, resulting in a lot more personal investment from them, and despite the genre being ‘light entertainment’, it frequently ends up much wilder than expected.

For example, here’s creator Alex Horne being subjected to water torture for the length of time it takes to boil an egg. It’s just that sort of show.

Taskmaster originates from the 2010 Edinburgh Fringe, wherein Horne set 20 comedians a series of tasks on a monthly basis. Horne’s love for The Crystal Maze and his envy at close friend and contestant of the first series Tim Key for winning the 2009 Edinburgh Comedy Award inspired this creation. Horne, who views the show as “more of a sitcom” as opposed to a panel show, repeated the format again in 2011, and used both successes to pitch the idea to Avalon, its production company.

It’s not a format that, without prior testing, allows for much confidence. The comedians stay for the entire run of the season, as opposed to the revolving method used by other shows in the genre, and there’s little room for pre-written material. The comedians have no clue what the task is before opening it – and both their time and resources are limited. This is, understandably, a huge red flag. We’re used to seeing comedians in their element – their name in lights, everyone cheering as they walk on stage and watching their ruthlessly-rehearsed routines. There’s an inherent respect that comes from that, something entirely absent from Taskmaster.

Any comedian is well within their right as a performer to reject this idea. Their attempts, and those of their peers, are secret until the live studio show. They’re also forbidden from discussing the show with fellow contestants, so it truly is an unknown until the recordings are shown. If the task at hand isn’t very good, or the show as a whole doesn’t work, it could be a disaster for them. On a similar level, that respect which comes from being a professionally funny person could easily be destroyed if they accidentally reveal themselves as a moron. Which happens frequently.

I had no idea until I did Taskmaster that I was actually thick as pigsh*t.

Paul Sinha, comedian, the Sinnerman from The Chase and real-life doctor

Tasks such as ‘draw the biggest and best circle’ backfire for James Acaster, whose attempt angers Davies so much that he growls “how dare you even speak” at a later point in the episode. Comedian and actor Lolly Adefope is put on blast as she blatantly ignores the one rule of a task requiring the movement of water from one fishbowl to another without touching said fishbowls. Tempers flare and rivalries form – it’s a level of professional, creative, and personal investment rarely seen on a comedy show.

Joe Wilkinson offered up his marriage certificate as a prize for the winner of an episode, and Romesh Ranganathan lost his car and his wedding ring. Acaster seethes with genuine anger at the revelation that during a joint task Rhod Gilbert sabotaged his own team, saying to Davies, “I don’t know how you’ve been friends with him for so long”. Iain Sterling and Lou Sanders consistently fight during team tasks; at one point Sterling sheepishly notes, “that wasn’t pleasant for me to watch”. Much of Taskmaster’s success is founded on the contestants as fish out of water, and their resulting successes or failures. Not all comedians are made equal. If someone failed a task or flat-out cheated, Horne and Davies have no qualms about ridiculing them on national television. It’s gloriously irreverent and all in good fun, but that lack of respect is attractive to both viewers and contestants.

Certain comedians also have it harder than others. Josh Widdicombe alone was made to count the number of beans in a baked bean tin. And the number of spaghetti hoops in a tin of spaghetti hoops. And the grains of rice in a bag of rice. Mark Watson was the only contestant from his series set the task of sending Greg a “cheeky text” every day for five months. Yet, because he missed a few days and the texts were unknowingly being sent to Greg’s actual phone, Watson received zero points.

…I’m absolutely shattered to get no points out of something which, genuinely, if I look back on this calendar year, it’s one of the major things I’ve done with it.

Horne’s commitment to his show cannot be understated. In the past, he’s been subjected to water torture. Liza Tarbuck once made him sit on a cake and Tim Key fed him a meal entitled “Citric Faeces”. Horne allowed Gilbert to pull down his trousers and underwear on multiple occasions, inverting the general idea that it’s the comedians who are being made fun of. One time, he let Ed Gamble to dress him up as a merman. There doesn’t seem to be much that he won’t do, and he often comes off worse than the comedians he’s meant to be ridiculing.

Horne describes recruiting for the first series as a struggle, and the entire show’s continued existence he places on the appearance of Frank Skinner acting as a positive signal to other comedians. Off the back of the first series, currently twelve series – each with a new cast of comedians – have been released, first by Dave and now by Channel 4. There have been spin-off shows in New Zealand, Sweden, and the US, and throughout 2020 Horne and Davies presented the ‘Hometasking’ project, setting tasks for people to complete during lockdown. Comedy titans such as Lee Mack, Russell Howard, and Jo Brand have taken part in a form of ‘ritual humiliation’, as Davies once put it. There’s clear power that comes from being a stand-up, but there’s a comparable power that comes from being depowered.

Taskmaster can be streamed in the UK on All4.