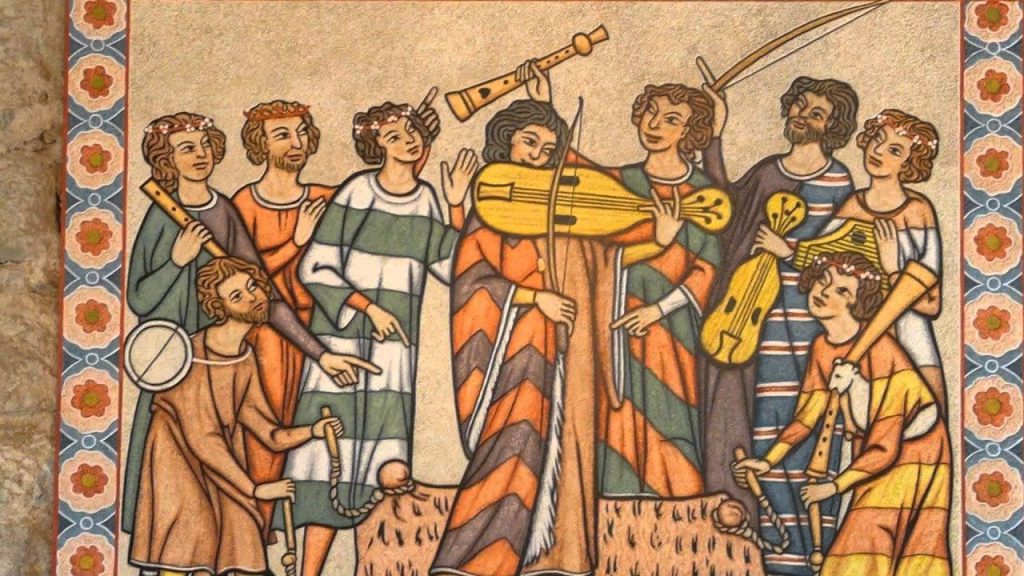 Medieval inspired worlds are everywhere in the media, especially in video games, as this era is easy to fantasise and romanticise.

The fantasy genre is often described as medievalist. Game devs take inspiration from medieval settings, using many elements such as geographics, history and culture as a guideline for their fictional worlds. Many of the conceptual elements of fantasy are taken from medieval fairytales, beastiries, feudal Europe, and neo-medievalism. The music within medieval-inspired games definitely reflects these things, for the most part.

Medieval is a very broad term, so for the sake of this article we are going to focus on European medieval music, its uses in games, how it’s represented and whether it’s genuinely accurate.

Music was defined as sacred or secular, and the differences depended on whether it was for entertainment or religious reasons.

The only knowledge we have on medieval music is due to historical reconstruction as very little music theory is known about the dark ages. Records of written music from the medieval era are extremely rare and even musical notations from the early middle ages were not universal (today’s music notation only became universal in the 1700s), which meant it was extremely difficult to decipher.

Sacred music was music written for the purpose of the Church. Back in the middle ages, most people were extremely Catholic, so worship music was very prevalent during this time. The Church believed that the more consistently music was performed, the more undivided the voice of the church would be. This is why most musical notations we see from this time are of sacred music, as the Church had a keen eye to write it down. From this, we learnt of our first universal notation system, neumes, created by the Gregorian monks.

Monophonic singing was the main musical practice of the church, the most well known being Gregorian chants. This method of singing is based on a single unison melodic line without any accompaniments. Uniformed singing was popular, even at the beginning of the Medieval era as it spanned across all of Europe, from Ireland to Rome to Spain etc. The sombre religious chants were known as plainchant or plainsong.

Heterophonic singing allowed musicians to add a second vocal line to their monophonic chants, often set at a perfect fifth or fourth interval away from the main melody. Polyphonic developments allowed music to have more than one melody line. Even if it was simple back then, it was extremely exciting for people as it differed greatly from their current musical styles. This is when Secular music (non-religious) became more rampant in everyday life. Art was straying from its main purpose as it no longer just focused on religion.

For the most part, Secular music was performed by troubadours and trouvéres, your European bards if you will. From the late 11th to 13th century, the bards had great freedom of speech, often writing about political matters, kings and queens, stories of heroes, love affairs etc. Naturally, their main goal was to allure the ladies of the court. Their poetic freedom opened up a completely new way of life, for commoners and nobles alike, creating a path for future generations to come. The main trait of the troubadours music is that it was monophonic with the occasional strum of a lute.

Chamber music also prevailed in the high middle ages. Often kings and queens, nobles, aristocrats etc. would hire a small group of musicians to play freestyle music in their court, palace chambers, large rooms and so on. Commoners could not afford to hire chamber musicians, so it was a form of music mostly broadcasted to the rich.

Many different instruments were used during this time such as: the fiddle, Dulcimer, Lute, Hurdy-gurdy, harp, mandolin, bells, drums, bagpipes, and classical guitar.

Is Medieval Music in Games Accurate?

Plenty of games we see today are set in medieval inspired realities, referencing different styles, religions, cultures etc. in history, but not all games follow this rule.

For example, the most accurate representation of Gregorian chants within video games is in the Halo theme song. This is surprising because the Halo franchise starts in the mid 26th century with extreme amounts of futuristic technology. Given the facts in this article, the first 30 seconds of the Halo theme stays true to medieval monophonic and heterophonic textures in music.

Another good example of medievalism in video games is within The Witcher series. Its extreme narrative with distinct anti-hero characteristics works perfectly with its historically accurate medieval setting. Despite being set in a made-up world called ‘the continent’, it references medieval Poland, Scandinavia and eastern Europe pretty well. Its iconic visuals and storytelling is just heightened by the impressive thought put into the soundscape. Alongside impressive sound design, the main aspect of sound within The Witcher is the score.

Polish composer, Marcin Przybylowics, decided to layer individual music stems in correlation to players action; from the decisions they choose in battle, whether they are losing energy or dying in combat and so on. Co-composer Mikolai Stroinski Stated to Tech Times, ‘the music has to accompany all those events to make the gameplay experience more believable and immersive.’ Both composers created a system of layering pieces of music focusing on every single detail within the game; the music even differs depending on the size of your enemy.

Stroinski was determined to drive the Slavic portion of the soundtrack by listening to folk bands from Poland, expanding to the Balkan, Bulgaria, Ireland and Scotland. They even hired Polish folk metal band Percival to help bring their score to life.

The simplistic rhythms and melodies when you’re exploring peacefully transposes perfectly to the epic battle scenes, the music is constantly transforming. The amazing authenticity of the soundtrack also comes from the instruments themselves. The primordial sounds are driven through the fact that they actually sound old and slightly out of tune. Even during times in the score where very heavy orchestration is utilised, and not as historically accurate, it is composed using basic riffs, which in turn are easy to recycle in an uncomplicated way.

Skyrim is probably the most well known, played and loved RPGs in the last 15 years. This game is also set in the middle ages with obvious musical inspirations from this time. However, composer Jeremy Soule, takes a more modernistic approach with the Music. The subtleties in the score, the percussion and melodies are far too complex to fit within the middle age era.

The only aspect of the music in this game that stays somewhat true to medieval times are the Inn and Bard songs. A winter’s tale and The Bannered Mare are reasonably medieval by using simple rhythms and few instruments. The scenes with bards also represent troubadours of that time fairly accurately; a single person singing alongside a Lute or a small harp.

Plenty of games take inspiration from medieval settings e.g. Rogue Legacy, Mount & Blade, Castlevania, For Honour etc. but don’t quite hit the accuracy mark when it comes to their music. Rogue Legacy’s music represents the Baroque era more than the middle ages, Mount & Blade utilises what we traditionally think is medieval music (soaring trumpets, violins etc.) from old movies but is not accurate. Assassins Creed I also takes place in a medieval European setting, and you can definitely hear the influences in the music, however, it’s undeniably more Middle Eastern than European.

So, is medieval music in games accurate? For the most part, no. Most games that take inspiration from medieval settings and/or the music feature a deep, percussion-heavy and Hollywood-inspired medieval score, and there is absolutely nothing wrong with that! However, if you want to create a track inspired by medieval music, and genuinely be accurate, it will definitely not be as elaborate as what you hear in most games or movies. The knowledge we have of music from this time is sparse. What we know is there was a lot of monophonic singing, simple melodies and primitive music theory. So no matter what composers write, aside from sacred music which was written down, it will never be 100% right.