A day at the fair which reveals more than the birds and beasts. 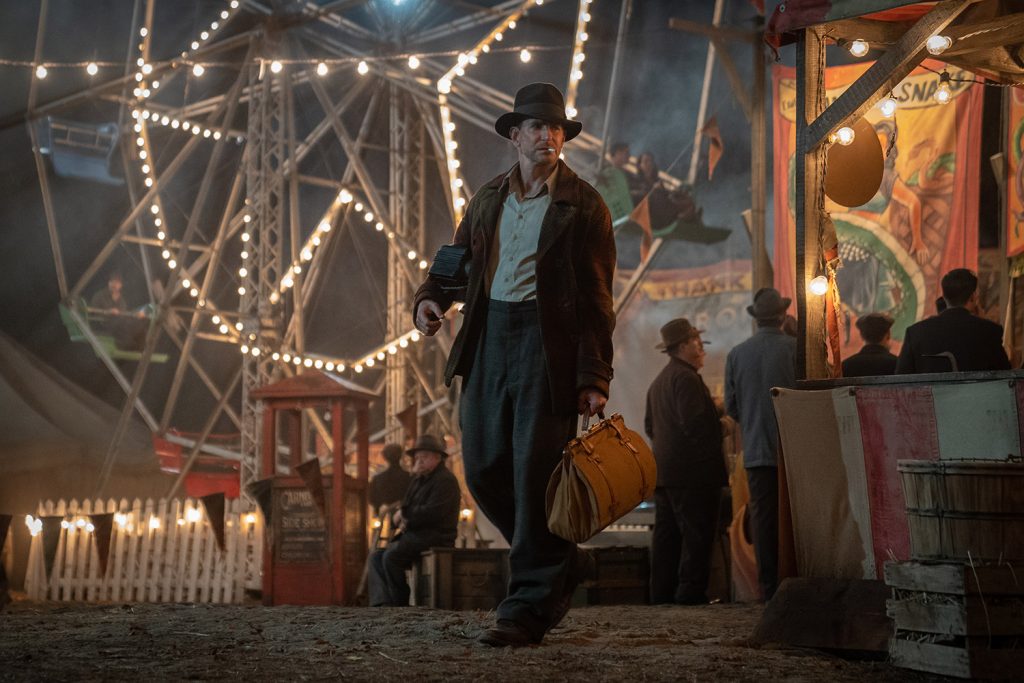 Nightmare Alley is Guillermo Del Toro’s adaptation of William Lyndsey Gresham’s 1946 novel. However, it is not the first, and before I continue with this review, I kindly yet sternly ask you, reader, to check out the 1947 version starring Tyrone Power. I remember, as a young and avid physical media collector, when I nabbed the Eureka! Masters of Cinema copy on DVD. It is a menacingly gripping noir gem and incredibly overlooked, perhaps until now, and is one of my favourites from the period, give it a go! Unfortunately, my love of the original somewhat did spoil some of the twists and delights of the 2021 version. However, I still found much to entranced by.

The film takes the story of the novel, also intermingled with Gresham’s non-fiction work Monster Midway (1953), which is mostly based on the experiences of an old carny Gresham met while serving in the war. Monster Midway is incredibly hard to obtain on the cheap, and I couldn’t even find a PDF, being largely out of print, but, hopefully, a reinvigorated interest will have somebody snap it up. Anyway! We drift along with Stanton Carlisle (Bradley Cooper); we’re in the late 1930s, full of hobos, grifters and opies. With his worldly processions in his pocket and a checkered past at his back, Stanton finds work with a travelling carnival where he meets the usual mélange of strong men, dwarves and contortionists. Here, we are also introduced to the revolting figure of the ‘geek’, a lost soul a few inches from the end of his rope resorting to biting off the heads of chickens for the ghastly amusement of the crowd. It must be sadly noted, that such people did exist, and in a particularly chilling scene, we learn the origin of such poor wretches. Quick-witted and curious, Stanton soon becomes embroiled in the carny life and is brought under the tutelage of Pete (David Strathairn). From his little black book, Pete reveals the art of mentalism but, after many years of drunkenness and disgust in creating a ‘spook show’, is hesitant to give up all the tricks. After a terrible accident occurs, Stanton takes his newfound skills, Pete’s notebook and fellow carny Molly (Rooney Mara), his assistant and lover- oh no, to the big city to create a slick show for moneyed big wigs. As all such stories go, Stanton begins to get rather too big for his boots, gets involved with another woman (Cate Blanchett), a psychologist at that; breaks his strict moral code and flies too close to the sun. You can only imagine what happens next. The film is rather predictable, but that is in no means a criticism, often finding myself squirming in my seat, frightened for what was obviously to come. Nightmare Alley grabbed me and dragged me, which I willingly accepted, to the brutal end.

Del Toro is a master of atmosphere, and Nightmare Alley is exemplary of his talents. Particular diligence must be paid to Tamara Deverell’s production design, also to be used on Del Toro’s upcoming Cabinet of Curiosities series. The carnival has a lived-in feel with plenty of muddy footpaths, torn tent curtains and indented flea-ridden mattresses. But it’s the periodic amusements, rickety fun houses and oddments in jars that take you into the sinister heart of the roving freak show. These sets are gloriously juxtaposed with the art deco design of the city, flamboyantly golden elevators, with none of the gauche Trumpism, nymphic bronze lamps and mahogany so shiny you may chance to find a camera reflection on close inspection. The film invites you to admire your surroundings, intermingled with enough horror and inter-war melancholy for want of distance. This feeling is deftly aided by frequent Del Toro collaborator Dan Laustsen’s lovely gilded photography. I often found myself marvelling at the excellently composed neo-noir frames. Bradley Cooper, his trilby brim pulled way down low, silently scheming whilst leaning against a telephone pole, leaves a lasting impression. His performance is superb, and his range has made it leaps and bounds from Hangover hunk. You like him, but you can’t trust him and the film constantly forces you to watch his decisions, often bad, through your fingers. Cooper shows his abilities throughout this Faustian tale, from tender curiosity and fantastically stylish megalomania on the rise to a deeply regretful and gross wallower on the back way down.

Cooper has it out with a very strong supporting cast including a perfectly earnest yet drunkenly pathetic mentor in David Strathairn; mystically good-natured and deeply sad Toni Collette; cigar smoking hard case Ron Pearlman and Rooney Mara, who plays vulnerable and folksy naiveté well in a leading role, although rather unremarkably. The stand out is Cate Blanchett, a fabulously vampish psychiatrist and damaged, dangerous seductress from the other realm of mind tricks. While a solid performance, the sequences between her and Cooper grew a little stagnant for me, sometimes cartoonish, with Blanchett often left with a couple of eye-rolling zingers. I had a similar feeling with the frightening and happily cruel Willem DeFoe. While always engaging, it seemed he was still reeling from his The Lighthouse (2019) performance, bursting forth some similarly styled loquacious monologues. It was as if his freak wrangler and lighthouse keeper come from the same sinister family of failed thespians.

Nightmare Alley is perhaps too long in places, but I enjoyed it nonetheless, never finding myself secretly taking a peek at my watch or tutting at the plotting. The film has a magic that is seldom found in modern blockbusters: there is the glitz, glamour and cynicism of a classical Hollywood affair. The film is even being re-released with a black and white cut from February 4th. Yet, despite the old-timey aesthetic, Nightmare Alley seems a terribly fitting film for the times. In a period teetering on insecurity, from the *cough*demic, politics of dread and the coming climate crisis, at the end of days we too are seeking answers in the mystic. Is it any surprise that in such times we see an increase in people’s use of astrology, taking to tarot TikTok to find some security? Or if it isn’t in the stars, it’s at the pulpit of the charlatan science deniers and demagogues. Are fake news and echo chambers any different from the smoke and mirrors of a carnival stand? We’re in a period where people find comfort in lies, like Stirling’s marks, who simply cannot accept the death of their loved ones, where the fantastical is something more believable than reality. However, there has to be a moment where we shake the spook show, lest we all turn to geeks.