The Gods We Can Touch – AURORA Album Review 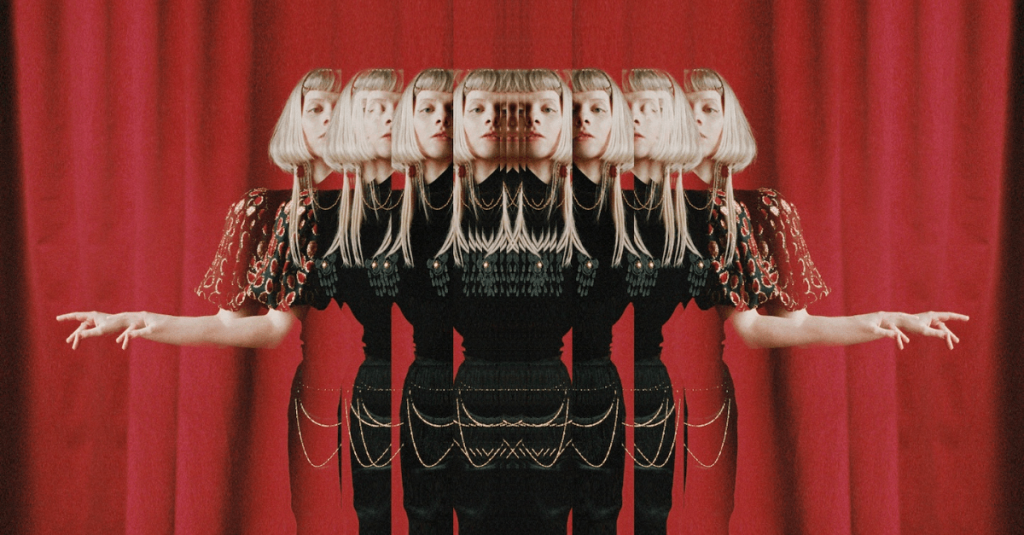 The Gods We Can Touch is the new studio album by Norwegian sing-songwriter Aurora Aksnes. Known mononymously as AURORA, Aksnes first signed with Decca and Glassnotes Records in 2014 and gained popularity with her debut EP Running With Wolves.

The Gods We Can Touch is her third studio album, heavily inspired by Greek mythology and religion. It’s about humanity’s relationship with the divine and ourselves. ‘I was very inspired by people and our relationship with power, with each other, with religion, with faith throughout history,’ Aksnes tells Apple Music, ‘A long time ago we seemed to feel like God was around us—in the ground, in the trees, in the water we drank—and therefore also in us. At some point in history, we removed God from the earth and put him far, far away up in the sky’. The idea of the divine as something equally complex and flawed as humanity is woven throughout the album with most, if not all, of the songs inspired by figures from Greek mythology, exploring the archetypes they represent.

The first of these and second track on the album ‘Everything Matters’, is a rare feature for AURORA. The song features a spoken-word outro written by French musician Pomme and tells a story about picking flowers in all of your favourite places. In her breakdown of each track for Apple music, Aksnes explains that she ‘wanted to include some Frenchness on the opening song as a gift to the castle that gave [her] the inspiration to finish this album’. Everything Matters is the perfect melding of these two influences: a beautiful art-pop/hymn-pop song that manages to be very personal and vulnerable, inspired by Atlas who carried the whole of the heavens and sky on his shoulders and about the feeling of always missing out on small miracles, of the fear people experience that they will never hear, see, feel or be enough, ‘You are part of the dawn where the light comes from the dark / You’re a part of the morning and еverything matters’. But also philosophical, the chorus touches on the microcosm–macrocosm analogy which posits human beings as being little worlds in which the universe is reflected, ‘herе we are, an atom and a star. You’re a part of the movement and everything matters’, and political, ‘part of the movement’.

While Everything Matters hints at the political, Cure For Me is directly inspired by it. The song is inspired by the LGBTQ+ community and about Aksnes’ ‘biggest issue with religion and the way it looks [down] upon the gay and trans community’. It’s the most political song on the album lyrically and thematically; a response to the fact conversion therapy is still legal in Norway, the UK and many other countries but is also the most radio-friendly. A more upbeat and snappier dance-pop tune, Aksnes describes it as a ‘fun little guy’ in an interview with NME, despite the subject matter. It works, a defiant show of pride, ‘But I don’t need a cure for me I don’t need it’ and a song about the right to be who you are, unapologetically. Still keeping the Greek myth theme running in this song, in an exclusive content video for the enhanced Spotify release, Aksnes explain that Cure For Me is at least partially inspired by the figure of Hermaphroditus in Greek myth, child of Hermes and Aphrodite, a long-standing symbol of androgyny.

Speaking of Aphrodite, the first single released for the album, Exist For Love, was inspired by her and could easily be considered a hymn to her. My favourite track on the album, written back in 2019 and released much earlier than the rest of the album, in 2020, Exist For Love is a beautiful esoteric love ballad about the importance of love and how love is the reason we exist; ‘And then I learned the truth / How everything good in life seems to lead back to you / And every single time I run into your arms / I feel like I exist for love / Only for love’. A hauntingly beautiful track, Exist For Love seamlessly transitions into another ethereal song dedicated to women.

Heathens alludes to several different feminine figures from different mythologies, from Eve to Persephone. Aksnes describes it as an ode to women and says, ‘It’s very inspired by women, especially how many women have been punished and burned just for being women’. Just as dreamy and ethereal as Exist For Love, yet darkly tinged. Heathens is a beautiful ode to women from mythology and real life who have fought for freedom; ‘We cry the fallen names / We cry for those who burn beneath the flame / We stand besides the good and brave’.

The Classical theme continues, masterfully and carefully woven throughout the album with songs like: Innocent, another upbeat track about the danger of oversexualisation of human bodies being dedicated to Eros, Artemis, dedicated to the song’s namesake, a seductive and haunting track about the goddess, and Blood in The Wine inspired by the complex nature of humanity’s relationship with faith that’s packed full of symbolism both of the Greek god Dionysus and Christian symbolism, ‘The flesh in the fruit, and the blood in the wine’, an empowering and epic folk-rock hit.

The symbolism of the album is extremely well-done, with each song feeling just as epic as the last and yet Aksnes succeeds in bringing divinity back to earth, and so the Gods once again become something we can touch and archetypes we can see within ourselves.