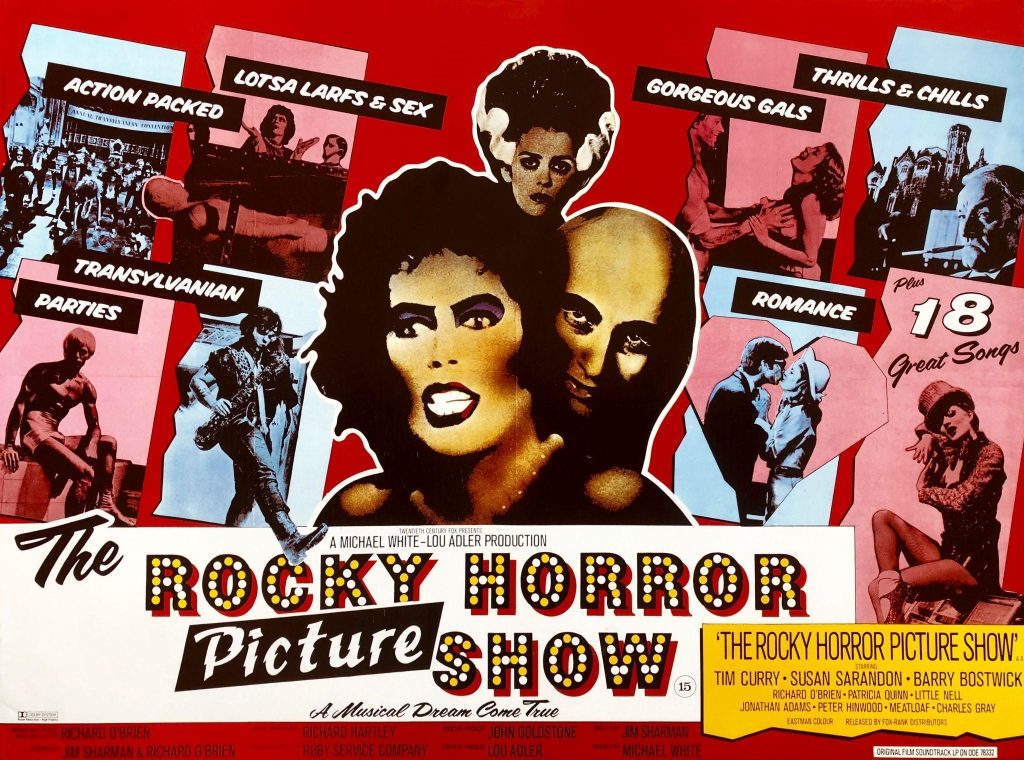 Rocky Horror Picture Show is one of the most well-known and beloved cult films. A film adaptation of the stage musical Rocky Horror Show, since its premiere in 1975, RHPS has been a mainstay of midnight film screenings, complete with its own traditions of dressing up like the characters and participating with the film. It is considered a classic of queer cinema for its themes of rejecting normality and embracing the transgressive, and its celebration of sexual and gender freedom. However, somewhat unsurprisingly for a 47(!)-year-old film, it has come under scrutiny for elements that are considered to be outdated and harmful. I love RHPS, but it’s important to look at all films with a critical eye, so in this article I will be exploring the problematic elements of Rocky Horror Picture Show, as well as examining why it is still so beloved and how it remains relevant.

The most criticised part of RHPS is the villain, Dr. Frank-N-Furter. A quick recap of the story: The all-American couple Brad and Janet come across a mysterious castle, whilst seeking shelter from a storm. In this castle, they find the Annual Transylvanian Convention, attended by a group of strange, colourful characters and hosted by Dr. Frank-N-Furter, a cross-dressing mad scientist who has created a man, Frankenstein-style, except the Frankenstein’s Monster is a handsome muscle man. Over the night, Brad and Janet are seduced by Frank-N-Furter, who is revealed to actually be an alien. Frank is one of the most queer and transgressive characters in the film, having sex with men and women alike and describing himself as a “sweet transvestite from transsexual Transylvania”. The outdated language may cause discomfort to a modern audience but is a moot point in this discussion as “transvestite” and “transsexual” were acceptable and commonly used terms in the 1970s. The main issue is that the most queer and gender non-conforming character is also the villain. Frank is a cross-dressing, pansexual murderer and rapist. Surely it is somewhat tasteless to associate queerness with murder and sexual predation? The film’s portrayal of Frank has become more scrutinised recently due to comments that the writer of the film and original show, Richard O’Brien, has made about trans women. In 2016 O’Brien said: “You can’t be a woman. You can be an idea of a woman. […] That is a huge jump and I have all the sympathy in the world for anyone who does it but you aren’t a woman.” In a 2020 interview with The Guardian O’Brien said: “As long as they’re happy and fulfilled, I applaud them to my very last day. But you can’t ever become a natural woman.” (It is important to also note that O’Brien identifies as “third gender” transgender.)

It is perfectly understandable if you are turned away from Rocky Horror Picture Show because of this. However, it is not as cut-and-dry as it may appear. RHPS is camp with a capital C. “Camp” is a sensibility that glorifies the transgressive, the tacky, and everything that is not accepted by society at large. Camp is heavily linked to gay culture and defies queerphobic cishet society by celebrating all the things that queer people are vilified for. When the uptight, boring Brad and Janet are contrasted with the jubilant, singing, dancing chorus performing the Time Warp, it is clear who the audience is meant to want to be. Frank-N-Furter exemplifies these qualities. He is evil, yes, but he is unapologetic. He embraces his identity and sexuality and is totally unafraid to be himself and to do the things that bring him pleasure. RHPS is no stuffy morality play, and the audience is meant to admire Frank for his confidence and unapologetic queerness.

LGBT viewers come back to Rocky Horror Picture Show time after time because of its themes of liberation, being yourself, and doing things that make you happy, even if they aren’t deemed as acceptable by society. As Frank-N-Furter says, “There’s no crime in giving yourself over to pleasure.” RHPS imparts the message that there is no shame in being queer, gender nonconforming, or just plain weird. The audience is encouraged to get up and dance with this strange group of characters, and to revel in all things unconventional. It is for these reasons that, even after nearly half a century, people still find RHPS empowering. These themes were relevant then and are relevant now. There is still much discussion in the LGBT+ community (as well as in other marginalised groups) about respectability politics. Respectability politics is the misguided belief that marginalised people ought to win over dominant society – in this case, cishet society – by behaving in ways that said dominant society will find acceptable. This is an idea born out of internalised bigotry and is ineffective in bringing about social change. Bigots don’t care how squeaky-clean and inoffensive queer people are. It is queerness itself that is offensive to them, and they are only satisfied if they never encounter queer people in any way. Besides, why should we act according to the standards of bigots? Why should we even care what bigots think? A recent example of rebelling against respectability is Lil Nas X’s Montero (Call Me By Your Name), which embraces the idea of homosexuality being “sinful”, reclaiming the same rhetoric that is used to harm LGBT+ people, and instead choosing to wear it as a badge of honour.

Again, it makes sense if the outdated elements of Rocky Horror Picture Show turn you away. Even if certain parts were considered fine at the time and are deemed as empowering by some, it can still be uncomfortable for some to watch. Despite still being relevant today, RHPS is a product of its time, and as LGBT+ people are becoming more generally accepted, there is demand for more realistic portrayals of the community in media. We no longer need murderous extra-terrestrial crossdressers as representation, and that is a good thing, even if they are fabulous and played by Tim Curry. It’s good that we have more variety in LGBT+ media, from the campy to the complex. Still, Rocky Horror holds a special place in my, and many other queer people’s hearts.