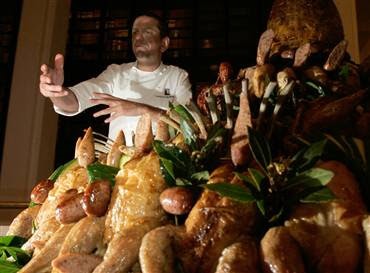 Futurism was an Avant Garde art and social movement based in 20th century Italy- its purpose was to create art that rejected the past and glorified the principles of modernity and the future. The movement praised innovation, vitality, experimentation and worshipped the symbols that embodied these ideas. Futurist paintings of the era emphasised the speed of modern motorcars and celebrated the magnificence of aeroplanes, capturing the excitement around the seemingly endless potential of modern technology.

But their ideas were about more than just art. Throughout the 1920s and 30s, futurists attempted to rewrite culture according to their vision. This included art, literature, theatre, fashion- and even cooking.

It’s thanks to futurism that we now have, what is surely, the strangest cookbook ever written. The Futurist Cookbook written in 1923, by Filippo Tommaso Marinetti, contains the most outlandish combination of foods you could imagine, with incredibly specific and bizarre rules for dining, and pages and pages of vitriol dedicated to promoting the abolition of pasta.

The bulk of the book is made up of bizarre recipes and here are just a few….

The diner is served from the right, with a plate containing some black olives and fennel hearts. From the left, they are served with a rectangle made of sandpaper, silk, and velvet. The food must be carried directly to the mouth with the right hand, while the left hand lightly and repeatedly strokes the tactile rectangle. In the meantime, the waiters spray the napes of the diners’ necks with a perfume of carnations while from the kitchen comes contemporaneously a violent sound of an aeroplane motor and some music by Bach.

Skinned salami is cooked in strong espresso coffee and flavoured with eau-de-cologne.

A hollowed-out orange forms a little basket in which different kinds of salami are placed, accompanied by some butter, pickled mushrooms, anchovies, and green peppers. The basket perfumes the various elements with orange. Inside the peppers are little hidden cards, printed with a Futurist phrase or a surprising saying. Examples of this are: ‘Futurism is an anti-historical movement,’ ‘Live dangerously,’ ‘With Futurist cooking, doctors, pharmacists and grave diggers will be out of work.

The recipes all fit a bizarre and highly specific criteria that Marinetti outlines in his 11 steps to create the perfect futurist dish. Each meal must embody “absolute originality”, not just in flavour but in presentation too. He describes how the table setting must harmonise with the meal, that diners should abandon the knife and fork, and that poetry should be used to somehow “accentuate the flavours of a given dish with their sensual intensity”

Because of the sheer absurdity of the content, it’s no wonder that there has been debate on whether this cookbook should be taken seriously.

Many don’t take it seriously and it was described at the time as “the best artistic joke of the century”. Like other futurist writing, it was written with the intention to be provocative and is steeped in such overly dramatic prose that it appears like a parody. With an opening chapter like “THE MEAL THAT PREVENTED SUCIDE” it’s not surprising that many focus on the humorous side of the book, with some suggesting The Futurists Cookbook’s true purpose was to satirically attack contemporary Italian culture.

But there is a problem with treating the book as a joke. While he didn’t genuinely expect people to recreate all these recipes, to Marinetti and other futurists, The Futurist’s Cookbook’ was not so laughable.

For one thing, Futurists really did open restaurants (with menus just like this) and they were just as bizarre as you would expect. The walls and tables were covered in aluminium foil and the dining tables were arranged at sloping angles to give the impression of aeroplanes in mid-flight. Instead of flowers, tables were decorated with brightly coloured potatoes.

But more importantly, Marinetti seemed genuinely committed to a futurist revolution in cooking.  He believed it would “strengthen, dynamize and spiritualize” the Italian people, lifting them out of the grip of a deep economic depression and give them what was needed: optimism.

While some of these recipes might have been written for shock value, they all genuinely embody the futurist way of thinking. This is made clear in a particularly bizarre part of the book: the chapters where Marinetti calls for Italians to stop eating pasta. At first glance, this seems like a joke, but pasta is a staple of Italian cuisine and has been for centuries. Futurists who had a seething disgust for anything traditional hated it. They blamed all of society’s problems on the past, which stagnated the present, and only through erasing history did they believe they could progress into the future.

This can be seen in Marinetti’s other work, such as the Futurist manifesto, where he compares museums to cemeteries, while expressing his adoration for the beauty of modern machinery. In the cookbook, he even describes pasta as making Italians “slow” and “pessimistic”, a contrast to his own cooking which he viewed as imaginative and optimistic. This conflict between the traditional past and the new future makes up Marinetti’s futurist ideology.

The Futurist cookbook is simply the futurist manifesto hidden in an easy-to-read cookbook.

Since this is the case, the book also hides a dark twist which makes it even stranger. If you’re familiar with the futurist movement, then chances are you know its association with Italian fascism. In addition to writing this cookbook, Filippo Tommaso Marinetti was also the co-author of the Italian fascist manifesto.

The two movements were intrinsically linked, and futurism is often seen as the artistic side of fascism, influencing the arts and architecture. This cookbook is no exception and Marinetti’s fascist, xenophobic ideas are on full display. He argued that Italians should not eat foreign foods and that names of things invented in other countries should be changed to new Italian ones. Some examples of this include renaming Bars to quisibeve (meaning “here one drinks” in Italian) and sandwiches to traidue (“between-two”). But on a more sinister note, in addition to optimism, he proposed that changes in the Italian diet would give them better strength to fight in an upcoming war.

From its recipe for deep fried rose petals, to its Avant Garde origins and fascistic undertones, you’d be hard pressed to find a cookbook stranger than this one.