Did You Go Nuts For Nutella Day? 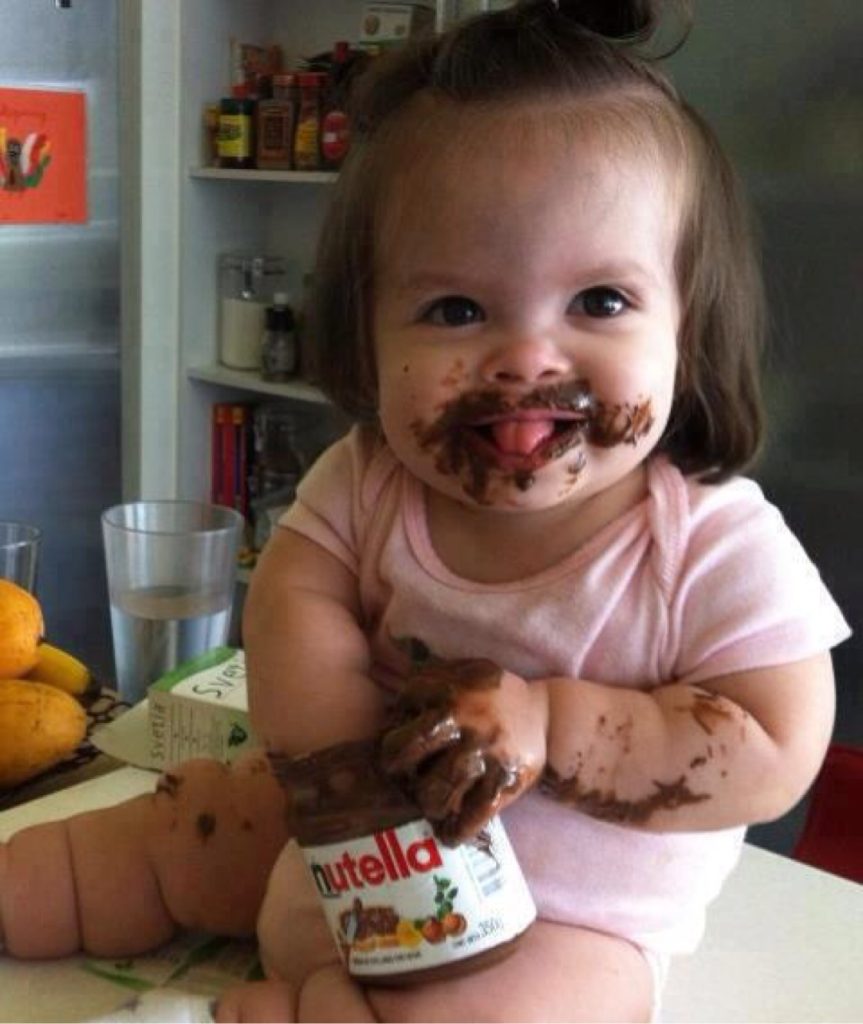 People say there’s now a day for everything but I think this choco-nutty treat has earned its 24 hours of fun. Yes, it was world Nutella day over the weekend (4th Feb) and this spread may not have existed if not for wartime shortages. That’s right. Because of the war, Italy was lacking cocoa beans. So they decided to make gianduja, a bar of blended hazelnuts similar to fudge.

Then in 1951, Pietro Ferrero made a smooth paste of this called Supercrema gianduja. Delicious but that’s not all! 12 years later his son Michelle thought “I want to sell this in Europe but it’s missing something”. Enter the cocoa bean. Michelle mixed hazelnut and chocolate in holy matrimony in 1964, renamed it Nutella and the rest is history.

It should be said that 1 jar of Nutella is 30% palm oil. An oil extracted from palm trees where orangutans live and the only way to get to the oil is to burn the trees down in their entirety. This means orangutans lose their homes and of course the burning destroys the Earth’s OZone layer. Consequently, people have boycotted Nutella, however, other products use palm oil too. So a better solution is to find a palm oil substitution.

Now the important message has been spread, let’s spread ideas on how to utilise this THICK treasure.

a timeless creation that never fails the taste buds, anyone’s taste buds. This is because there are so many ways to go about it. You take 2 slices of bread, preferably toast them then:

Just Nutella ~~> a classic, a go-to. You don’t like wasting time with other jars of other toppings. The richness of the choco-nut combo smothered on the bread is enough for you.

Nutella and Fruit ~~> who said getting your five a day had to just be munching an apple? Mix it up, any fruit you like! Even slathering some jam or marmalade on one slice works wonders.

Nutella and Peanut Butter ~~> this is for the hardcore nutters out there who spoon PB out of the jar. Both spreads are hearty and together they make an indulgent sandwich.

Nutella and Marshmallow Fluff ~~> no, this isn’t something Will Ferrell’s Elf dreamed up. It’s real. Sweet, smooth and pillowy fluff paired with Nutella? Some say marshmallows are futile, not like this. Elf WISH he had this.

When you make hot chocolate at home, it may come out weak and puny. This drink has to be like liquid gold that is full of rich chocolatey flavour. One way to guarantee this, is to add a heaped teaspoon of Nutella into your cup ALONG WITH the coco powder, not instead of. You can also mix it with peppermint tea, if you like the refreshing blend of mint and chocolate.

This is for when you have some baking ingredients knocking about in the cupboard. Not enough for a full traybake, but enough to fill your biggest microwaveable mug. You just put 1 egg, flour, milk, sugar and of course the Nutella together in the mug and mix. Then pop it in the microwave for a minute and out comes a steaming sponge cake.

Now you have the foundation, you can top it any way that you want, especially if you’re not sharing:

It’s also a great way to use up the remaining packets of baking ingredients so you can start your next baking adventure with fresh ingredients.

Yes, this is the miscellaneous section. The ideas that MAY have crossed your mind then you thought nooo, that’s too far. If you’re craving it and it’s not poisonous, then nothing is too far. You might even discover a new flavour.

Bacon ~~> Yep, the ultimate salty and sweet pairing. You cook the bacon, or bacon alternative in the oven until crispy, then smother each crunchy piece with Nutella. Winner. Maple bacon is a thing and pineapple bacon is a thing, so why not let Nutella join in?

Potato chips ~~> This is an upgrade from spooning the spread straight out of the jar. This time you scoop the spoon onto a crisp flavour of your choice. Flaming hot, cheesy, Worcester. I would personally go with ready salted McCoys, that’s a strong potato chip.

Popcorn ~~> The most versatile vegetable, even more so in popped form. You get the bags of ready-to-pop popcorn for the microwave and when they come out, just drown them in Nutella.

You can also pour other toppings on like pretzels, Smarties, Maltesers, M&M’s, Revels, whatever your feeling.

We’ve all been there before, scraping the remains of the jar before chucking it away. Well now you don’t have to. Simply pour in hot milk and stir it. You could even add a drizzle of instant coffee for a Nutella mocha. What if the weather is too hot for coffee? On those rare occasions, you wait for the milky mixture to get to room temperature, then pour into a glass with ice. Et voilà, ice coffee, or ice mocha if you are sophisticated.

So did you celebrate Nutella day, or are you not so nuts about it? Let us know in the comments section below.