An Insight into Dark Animation 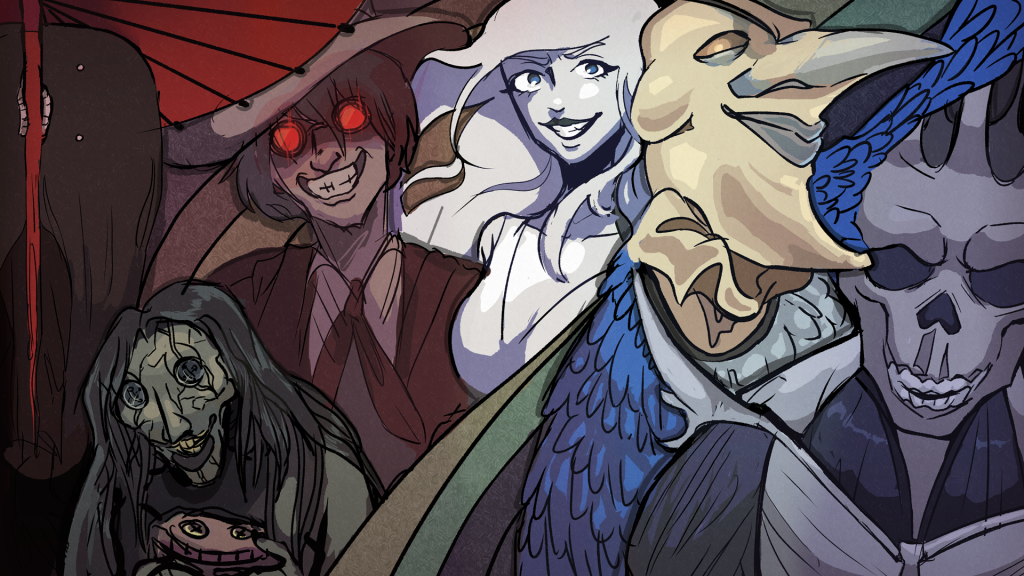 What’s the first thing you think of when you hear ‘animation’?

Animation is a truly fascinating art. It’s an endless well of creativity, and there are limitless ways of expressing it: 2D, 3D, stop motion, CGI, claymation. All are many forms of just animating, let alone the endless personal art styles within each of them. And above even that, there are genres.

I’d like to draw attention to what I feel is an underappreciated genre in particular, and that is, as you will have guessed, dark animation.

When I say dark, it has a lot of vagueness as to what it connotes. And I think that’s the strange beauty of it, while something like a Disney movie is, most of the time, a family musical, darkness is portrayed in a plethora of ways. There are dark elements, tones, and moments. A passing shadow in which we see something unnatural, something that makes us feel we weren’t quite meant to see it.

Coraline (2009) is a good place to start, due to its popularity. I’m not sure how it was ever considered a children’s film. For a good portion of the movie, it retains a childlike innocence; Coraline wanders into a parallel world where her parents are more caring to her, and the world is much more extravagant and exciting compared to the dull real world. But things quickly take a turn for the worse when her ‘Other Mother’ tries to make her stay forever by replacing her eyes with buttons, like all the other inhabitants of the parallel world.

Coraline begins to discover the horrifying secrets behind this so-called paradise, and must desperately escape ‘the Beldam’ posing as her mother, as well as nightmarish versions of her neighbours. The colour schemes are perfect throughout, particularly when the Beldam is left alone in her dark room, illuminated by a menacing green light – illustrating only the greed and malice that fills her fabricated world. It’s simple, but very effective.

I can’t recommend this movie enough. At any age, it encompasses the audience with a dread that even most horror movies cannot do successfully.

Devilman Crybaby (2018) is far from subtle in its dark themes. From the first of its 10 episodes, we’re visually assaulted with violent gore, twisted nudity, and grotesque creatures. During one of the more infamous scenes in the show, a huge sex party is disrupted by the emergence of demons within numerous people, and we see nude bodies become deformed as they transform into horrific beasts that slaughter and devour the crowd. It’s straight to the point and simply shocking to see, and throughout the remainder of the show, the violence only increases, as does the issues raised.

There’s a clear message about bigotry to be learned in the latter episodes, where demons are revealed to the public and are said to be possessing many people without their awareness. There’s ostracism, alienation, and brutality. Humans kill humans that they think are different. Innocent blood is spilled, while the real culprits orchestrate the hatred from afar. The show also displays LGBT+ relationships and other themes steeped in sexuality, particularly puberty. For every moment that has a good outcome, the world around that moment worsens tenfold. It’s depressingly realistic despite the fantasy themes, even in a nigh-apocalyptic world, where true evil is bold and blatant, humans focus their hatred on marginalised groups. Sounds familiar, doesn’t it?

The show is not for the faint of heart, but to those who can stomach the monstrosities, it is an unforgettable series.

In a similar manner to Devilman, Hellsing Ultimate (2006-2012) is forthright with the shocking violence. The story follows the all-powerful vampire Alucard, a modern form taken by Dracula, who is now a servant of Integra Hellsing, as they take on supernatural threats across England. These usually manifest as other vampires and the ghouls they create from their victims. Joining him is his apprentice vampire, Seras Victoria, a young police girl he personally turned and saved from the clutches of another vampire.

Hellsing is filled to the brim with stunningly dark scenes, as well as odd moments of light-hearted humour. The story isn’t particularly deep or subtle (this is no Berserk, despite a comparable amount of violence), but it is there, and it is expanded upon sufficiently enough. The real treasure is the imagery itself, and the enthralling, gory confrontations between uniquely designed characters. That might be the simple, easily pleased part of my brain, but it is definitely a very, very fun series.

Keeping the train rolling, we now have, quite possibly, my absolute favourite series and certainly my favourite animation ever. Castlevania (2017-2021) is based on the classic gothic horror game franchise of the same name, and takes many inspirations from it – namely the characters and monsters. Castlevania takes some liberties to further expand the personalities and backgrounds of characters borrowed from Castlevania 3: Dracula’s Curse and Curse of Darkness, while still vaguely following the plot.

I’m honestly not sure I can do the series justice by attempting to explain it. It does so much in so little time; it’s a perfect blend of everything I love in a story. We’re presented with a diverse range of distinguished, lovable characters, that all get their moments to shine and to develop. There isn’t a single misused or wasted character, no matter how short their appearance. Every small event and conversation has repercussions. The world feels believable, flowing, and genuine.

Even if someone does not enjoy darker themes, of which the series has plenty, Castlevania is a cathartic experience. Issues of grief, revenge, sexuality, manipulation, desire – they’re all confronted openly and realistically. Personally, many characters and relationships helped me resolve some things of my own – like bisexuality for example, some characters definitely solidified confused feelings I may have had (prime example: Hector and Lenore below).

Nonetheless, I cannot recommend it enough, even the voice cast and soundtrack is fantastic through and through.

Yamishibai (2013-present) is a very peculiar series. Based on the Japanese art of ‘kamishibai’, each episode is but a few minutes long and illustrates a short horror tale with its unique style. Currently in the midst of its tenth season, no two episodes are the same, every story is completely unique and a vast majority are original creations, while some are based on existing ghost stories and legends.

Some of my favourite episodes include ‘The Next Floor’, ‘The Umbrella Goddess’, and ‘Tormentor’, all of which are just in the first season. If we’re talking about horror, this is my absolute favourite way to do it. There’s a true art to creating short horror, it’s something that many horror movies fail to grasp. They run their course, there’s some kind of confrontation, then the issue of an ending occurs. I could count on one hand the amount of horror movies I’ve seen with a satisfying ending, and the list of horror movies I’ve seen is certainly not a short one.

Meanwhile, with something as short as 4 minutes of horror, the mystery is there, the horror itself, the terror leading to it, perhaps a small insight into what the horror is, and then it simply ends. There’s no more or less to it, it’s a simplistic formula that just works. It’s an unfamiliar style for many, and it can certainly throw you off. For fans of horror that can appreciate something completely original, Yamishibai is a must-watch.

The Sandman (1991), what can I say? Back when I was around 11 or 12, my English teacher showed it to the class. At this point I hated horror; I’d watched quite a lot by proxy of my older siblings watching horror movies in the living room. I had a crippling fear of the dark and being alone – I couldn’t stand being upstairs alone, which meant I had to stay and watch the movies downstairs. I specifically hated The Ring, because the girl terrified the hell out of me – to the point I also developed a fear of girls with long hair. This was not helped when my sister (who had long black hair and knew how much I hated The Ring) would play a ‘game’ with me where she would shut me in a pitch-black room and hide while saying “seven days~”, imitating the voice that indicated you were going to die soon. So yes, I was a very fearful child.

When we watched The Sandman, I was entranced. It was terrifying, yet artful. It filled me with anxiety, but also excited me. I watched and wondered how someone could make a horror that I actually enjoyed watching. While all these other 11 or 12 year olds were getting creeped the f*** out, I was kind of euphoric. The atmosphere, the sound design, the colours, the story told with no words at all. It all fell together and I couldn’t get enough. I saw this creation and wanted to make something that could one day give someone else the same feeling.

It is certainly worth 10 minutes of your time.

As my mad ramblings about odd dark animations come to an end, I’d like to implore the more creative people in the world to keep doing what they’re doing, keep making your art, no matter how niche it is – it’ll be The Sandman for someone else one day.

Again, many, many thanks to Rae for the wonderful illustration – support them here also.