Keith Floyd: When Cooking was Cool 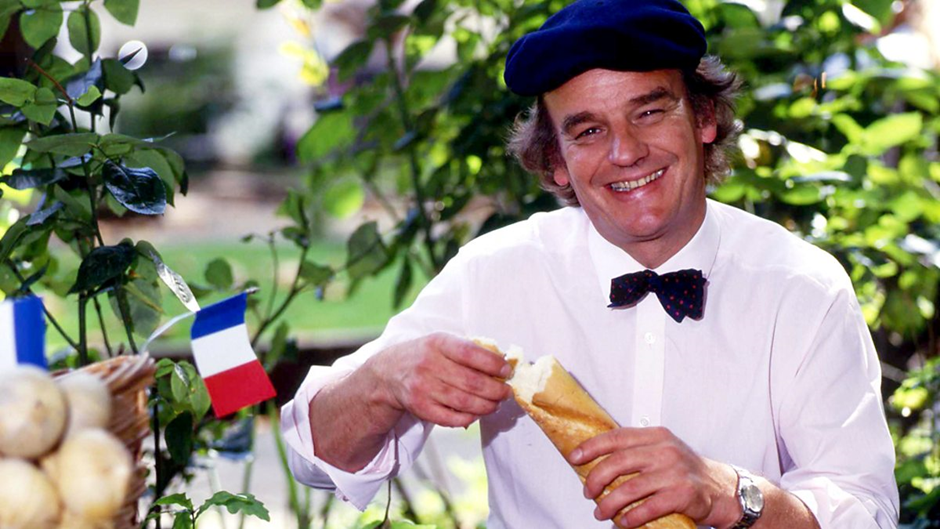 It was one of those melancholic Sundays, around 4 o’clock, as the weekend wastes away and Monday’s reality settles in, that I first encountered Keith Floyd. That evening, I was sullenly browsing the BBC iPlayer until I finally stumbled across the series entitled Floyd on France. The photograph piqued my interest; I wondered who this slightly dishevelled chap, centre frame, armed with baguette and bow tie was. What had he to say of mon plus grand bonheur? Episode to episode, I watched this cavalier Englishman travel the regions of France from Pays Basque to Alsace, cooking delightful food, befriending the locals and telling off his camera crew, always with a wry joke and a slug of wine. There is something tantalizing about Floyd, something distinctly English in his rakish allure. He had a jaunty formality about him, without pretension, and his sozzled friendliness would allow for anybody to join his table, as long as they proved good company and most importantly, loved food.

Floyd had a varied career, starting as a local journalist; he soon joined the army after being inspired by the 1964 film Zulu. Later he would work in various kitchens until opening a string of restaurants in both the UK and France. His restaurants would often close but, never deterred, he would always open another, and eventually, the restaurateur began to rub shoulders with media types who’d frequent his Floyd’s Bistro in Bristol. It was from finding work as a radio cooking presenter that Floyd met BBC producer David Pritchard, who first asked if he wanted to make something for television. That something became Floyd on Fish, a landmark of the genre, making Floyd a household name and sealed his reputation as the bon vivant of TV cooks.

Previously, cooking programmes had a staid and instructional feel, they were heavily scripted, pre-prepared, and their hosts never left the kitchen. Prichard defied convention by sending Floyd to any location they could get their hands on: the back of boats, a high-speed train, even an ostrich farm. These shoots were often on a whim, and when watching them, you really sense the randomness and immediacy of the production. Floyd began the trope of TV chefs looking pensively at the spices of a far-flung marketplace and enjoying a locally crafted dish, awkwardly trying to befriend the community. Except Floyd genuinely befriended the community, and the guests that wander onto his programmes always seem to enjoy themselves. Floyd on Fish also introduced the infamous spotted bow tie and gave Floyd the opportunity to confer his love of seafood alongside the people who catch, cook, and eat it. Each episode is dedicated to a particular dish, and Floyd meets an array of the UK’s most eminent chefs including a young Rick Stein, whose segment is one of the most enjoyable of the series. It is fascinating to watch Floyd and Stein instruct how to cook a bass in great convivial spirits as they intimately exchange tips and tricks that would be potentially lost with a script.

Floyd was about food at its simplest. That isn’t to say he wouldn’t bask in his own performance, he understood the conventions of cooking for television and knew how to master them. Some of the most delightful moments in his programmes are Floyd making slights at his producer and often sternly telling the camera operator, ‘don’t look at me, look at the food’. Floyd never shies away from deconstructing the genre and often takes efforts to tell us through witty narration how his programmes are made. He reveals everything: from if there was a blunder while shooting, to if the crew partied a little too much the night before. He makes off-handed comments about budget and admits when the production tries to spend as much as possible to ensure the same for the next series. Floyd demystifies television, takes away the illusion of importance and gets down to the food.  Cooking sketches would be live, with little preparation, and presents a real guerilla aesthetic as they capture the heat and stress of a kitchen outside the studio. Floyd cracks on with a breezy demeanour and competent skill which makes cooking good food appear obtainable, even easy.

There is always a fabulous eccentricity in these early programmes, and each new series would have something new added to the formula. His wonderfully off-beat style even boiled down to his choice of music and used strange acapella parodies of old song standards used as interludes. Floyd also insisted on his favourite band, The Stranglers, to provide the title music with their eldritch Waltzinblack and the jangly guitar and grunts from the track Peaches to close each episode. He would go on to make several series with the BBC before the relationship with Prichard eventually broke down, finding himself on Channel 5 and other small European networks.

Sadly Floyd’s life wasn’t always as fun as his programmes painted him, riddled with bankruptcies, messy divorces and estranged relationships with his children. Alcoholism too became a problem and eventually, Floyd fell into relative obscurity. A 2009 documentary Keith meets Keith, hosted by actor Keith Allen, attempted to fill in the gaps of Floyd’s disappearance from the public eye. They find him at his home in Avignon, in the middle of being repossessed by his ex-wife, and listen while he unpicks his career. While there are still glimmers of the old Floyd, the cheeky humour, the charming knowledge and flamboyancy in dress, it is clear that he is somebody who has taken a fall. There is a particularly tragic moment where Floyd tries to reconnect with his estranged daughter which, to her surprise, is to be recorded on camera. The film has a reality aesthetic and a tinge of exploitation as we see Floyd try to keep up with his former self and the reality of what he has become. Spookily, and on-brand, the day the documentary aired, Floyd was no more. A lifetime of excess eventually took its toll, and Keith Floyd died in 2009 aged 65 from complications with bowel cancer, leaving behind a great legacy of televisual innovation.

With everybody from TikTok flops challenging Gordon Ramsey to a cook-off, to other viral affairs which seem to put bacon and cheese on everything, there are many amateur cooks out there. Food is a popular talking point, and our ever consuming society always buzzes for a new burger joint or whatever recipe is floating around social media. But there is a ruggedness, a certain ‘Je ne sais quoi’ to food programming that is missing. Some of the great cavaliers of cooking shows such as Floyd and the late Anthony Bourdain are lost to us, leaving a longing for the adventuring, always entertaining, culinary flâneur. Yet there is still a great archive to be explored, and I implore you to seek it out. Floyd on France is currently available to watch on BBC iPlayer, while most other series including Floyd Uncorked, a programme about wine, can be found as TV rips on YouTube.  I would start with Fish or France and hope that you may see for yourselves the joy in watching cuisine with class while also retaining a sense of booziness and fun. Happy cooking, cheers!