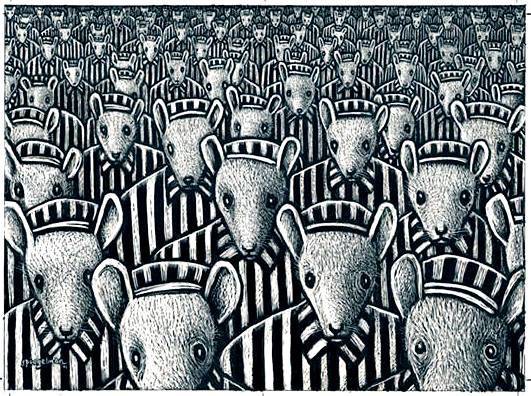 In the ongoing, and increasingly tedious, so called ‘culture war’, banning books for their content or author’s actions has become common place. It isn’t anything new and we only have to look back on the Emperor Augustus’ exile of the poet Ovid, banning his Ars Amatoria from public libraries; the Catholic church’s ‘Index Librorum Prohibitorum’ that spanned 500 years; to James Joyce’s Ulysses which marks its triumphantly obscene centenary this year, to see that it probably won’t go away. However, with a bi-partisan effort of both the left and right to ban books and a reliance on new technologies to ensure it could happen, the fate of literature, or any other artistic work, is at risk of being lost to time.

The torch of discussion is once again burning after a Tennessee school district took the controversial decision to remove Art Spiegelman’s graphic novel Maus from its eighth grade curriculum. Maus is a devastating biographical account of Spiegelman’s Polish Jewish parents in World War Two and their survival of the Auschwitz-Birkenau concentration and extermination camp. Spiegelman represents his characters anthropomorphically, with Jews drawn as mice and the fascists as cats; weaving between the present as he interviews his elderly father on this war time experiences and the past that illustrates them. The book won a special citation Pulitzer Prize, is commonplace in school libraries and used as important text to truthfully teach the grim reality of the Jewish holocaust. Maus’ withdrawal came after a string of complaints from local parents, who felt the novel’s graphic depiction of genocidal violence, nudity and use of ’curse words’, was inappropriate for children. The school board unanimously voted to ban the book only to be met by a tornado of complaints from parents, teachers and online commentators. It was later revealed that some of those who had voted for the ban hadn’t even read the book and instead based their judgment on extracts and reviews. Yet no press is bad press and the full edition of Maus, originally serialized from 1980 to 1991, scurried to the top of the best seller’s list. What started as a parochial attempt to suppress a challenging work became an unlikely campaign for new readers.

However, there is not always such solidarity when it comes to literary outrage. It is an issue that chiefly resides in the US, in states such as Texas where books that discuss pertinent social issues such as the refugee crisis or representations of black, gay and transgender protagonists are routinely pulled from shelves. This is often without the consent of the American Library Association and has caused a string of protests from parents and students.  These stories often make for good opportunities to take good pop shots at religious, right-wing conservatives. But wade through the quagmire of Twitter threads, Good Read reviews and a miscellany of literary blogs, the realm of the unreal, and you may find something similar on the other side of the coin. From asking publishers to remove the incorrect nomenclature from a newly released title, to boycotting an author for their political opinions, liberal book banning is equally prevalent. A recent example is that of the British poet and teacher Kate Clanchy, whose Orwell prize winning memoir Some Kids I Taught and What They Taught Me garnered criticism online of her depictions of black and autistic students. A debate soon raged, promptly mired by some of Clanchy’s defenders unleashing a torrent of racist and violent abuse onto her critics. Clanchy apologised and re-wrote some of the offending passages while some of her students spoke out in her defence. Despite this, the waves of outrage raged and eventually led to Clanchy’s publisher Pan-Macmillan to relinquish its rights to the memoir and cease any further distribution of her previous work. This is becoming a frightfully common choice for large publishers that get backed into a corner by online flak. Rather than stand by an author, who are often the target of liberal outrage, they are quick to bury them in order to save reputation and profits.

The Clanchy controversy is another episode in a long series of complaints hurled at typically straight, white, authors who try to write something outside their own lived experience. This has influenced a rise in so called ‘sensitivity readers’, editors hired to ensure that manuscripts contain no misinformation, bias or potentially offensive content. While we must champion diversification in publishing, if only identity is valued: how are authors expected to share their voice when having to narrowly conform to a pre-conceived notion of a cultural experience? What may be accurate to one reader is wildly fantastical to another. If the old maxim ‘write what you know’ only boils down to your own experiences, publishing may as well become a well-oiled biography machine. But in an age where personal experience is given constant coverage through social media, it is easy to see how others may find representations of the world outside their own experience a threat. This isn’t to say that there aren’t books written in bad taste, with terrible caricatures and complete cultural blinders. But should a small minority be able to bury a book, which may have other merits, for the sake of their own sense of self? The problem with this is that it assumes that everybody will have the same response; will every child be corrupted by Maus? Will every person of colour find ‘Some Kids’ racist? Speaking on behalf of other groups to suit a personal ideology, and retrofitting your idea of how they should react is stifling. Do we not want to encourage free thinking, tolerance of different opinions and an ability to discern our own views? What evidence is there that every call for a book to be banned comes from somebody who has actually read it, and may instead be cherry picked of proclivities from extracts, reviews and, ‘hot takes’? It is easy to get swept up in an online pile-on or impassioned school board protest when your values are under threat; however following our feelings often makes us blind to greater implications.

Readers have the choice to read what they want, as is their right in a free and fair democratic society. But what happens when that choice is taken away? While we have the internet as a boundless library of knowledge, its ephemeral nature means it could be forever lost at the click of a button. With the decline of physical media, we are seeing vast cultural catalogues on cloud based software, from music to cinema, online consumption is slowly becoming the only way to access these works. And if you can only access these works from a third party site, they often choose how they’re exhibited. We are already seeing this with Disney removing controversial sequences from its back catalogue on its streaming service Disney+. However, it isn’t only Disney originals that are being affected but also content, gained in corporate acquisitions, made by different people, at different times. This corporate woke-washing to ensure minimum controversy and maximum sales is vandalising cultural history for the sake of contemporary sensibilities. If the only option is to continuously censor, change or even destroy history that is unpalatable to placate the present, how is it possible to learn from it? This is not only a concern for cultural industries but also how we as a society read information and determine what’s true. In a world of shifting narratives, false news stories and simulated images, all to be further muddled with AI generated deep-fake technologies, preservation of knowledge has never been more important. China’s efforts to suppress inconvenient history on its state-owned internet; Spain’s former ‘pact of forgetting’ its fascist history, and the British government ‘losing’ controversial yet crucial documents from the national archives, are all examples of knowledge being withheld to service power. With moves to make our societies more digital, such opportunistic and manipulative politicking can be more easily achieved. Banning books is a risky notion in a time where it is sometimes difficult to distinguish fact from fiction. If the majority of readers are happy to send books they do not like, or threatens their identity, to the void of time, so will a tyrant.  Our literature and our history, while sometimes ugly, is the story of our humanity and something we must protect. The brave custodians of the ancient libraries of Iraq and Syria risked their lives to preserve historical manuscripts from the cultural barbarism of the ISIS caliphate. We must do the same. But, to protect our continual cultural heritage and sense of truth we must not allow ourselves to be swayed by changes in ideology and the whims individual prejudice such as those on Twitter and local school administrations. The Maus story is one of survival, and the backlash to its ban is evidence of its cultural endurance. But unless we’re willing to sacrifice our personal sensibilities for a free-thinking, tolerant and truthful society, in less progressive times, we may lose it to the bonfire of the blinkered.