How investors are making millions from virtual property 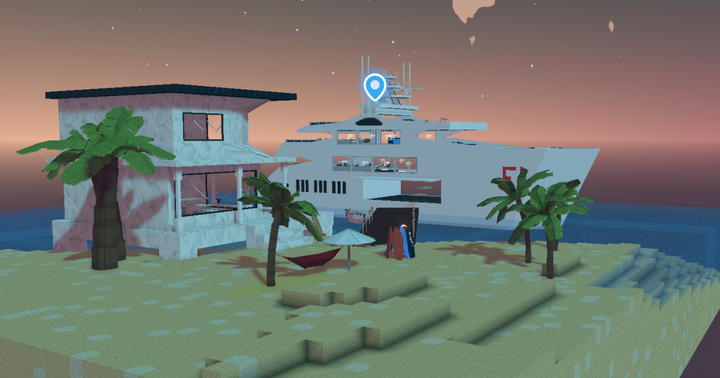 The vaguely futuristic Metaverse entered mainstream technological discussion after Meta, formerly Facebook, founder Mark Zuckerburg hosted its eerily synthetic launch video last October. Since the launch, which included: a toe curling segment with former deputy prime minister, now vice‑President for global affairs and communications for Meta, Nick Clegg; the awkward promise of VR office meetings; tutorials of trumped up mobile games and the tantalising ability to buy even more things, the Metaverse has been sold as the future of human connection. Yet despite the promises of what is come, the Metaverse, in its primitive form, is already here. It exists as no single entity and can be hard to distinguish with currently no unifying icon to define this world inside the wires. There are already several platforms and ‘worlds’ that constitute the Metaverse including Decentraland, The Sandbox and Somnium Space, to name a few. In these spaces, users can explore the vast landscapes, connect with people around the globe and play interactive games. But what may initially seem like another distraction from the drudgery of everyday life is in fact slowly becoming a gold mine for global companies and investors.

Even before Zuckerberg’s dream of a fully-fledged Metaverse has been realised, before the technology has caught up with its potential, even before the Metaverse has mainstream usage, investors have already flocked to buy their own slice of the virtual pie. According to a report by JP Morgan Chase, users spend $54 billion annually on virtual goods and with NFT (Non-fungible tokens) market cap reaching $46 billion, major corporations are throwing money to create their own Metaverse strategy. With so much investment coming from around the world, it is suggested that this online industry may eventually exceed $1 trillion dollars in annual revenue. One of the most lucrative investments has been in virtual property which, since Meta’s announcement, has seen its value skyrocket by almost 500%. Virtual developers are already seeing a return on their investment where once cheap parcels of online land are now being sold at an average of $350,000. The largest sum spent on Metaverse land has been an eye-watering $4M by the company Republic Realms for hundreds of square mileage in ‘The Sandbox’. The hope is that with an increasing use of the Metaverse, the values of these properties will keep on rising and be worked to generate capital. This capital is hoped to be gained from a growing rental market in which advertisers, businesses and users can use the land to trade or build on. In November last year Justin Bieber performed a ‘live’ concert inside the Metaverse, because even in fantasy we can’t escape mediocrity. Users could watch the concert for free and submit comments while Bieber, connected to VR, performed to an indistinguishable horde of avatars. While early in the process, concerts are considered to be a big future money maker for property owners who will be able to reap the rewards of ticket sales and advertising. These virtual properties are yet another example of NFTs, which can be bought in the same way as any other item in the Metaverse, such as avatar clothing, furniture and art. All you need is an online wallet that holds cryptocurrency, Decentraland uses its own native currency MANA, and once connected the virtual land’s marketplace you are free to spend at will. However, what is most concerning is that while developers are flocking to this online world and buying it up, the land itself does not represent a tangible asset. This alongside the infamous volatility of cryptocurrency makes spending thousands on NFTs a risky investment. While some digital worlds retain that the land on their servers is finite to drive up the value, there is no certain guarantee that it’ll still be there in years to come. But perhaps the problem with the push for the Metaverse isn’t so much the concept itself but rather who is looking to gain the most from its success.

The dream of the internet as a place for the exchange of knowledge between people in a free and open virtual society was laid out in John Perry Barlow’s ‘Declaration of the independence of cyber space’. Decades later, large tech companies alongside real world corporate entities have cornered online industry, exorcising billions of dollars’ worth of user data, pumping them with targeted advertising and now, more worryingly, adversely affecting democracy with the spread of misinformation on their platforms. What is so striking about the vision of the Metaverse is that it is not being built by a population who see its harmonising potential, but rather by the same tech companies that have high jacked the progressive dream of the web for profit. Some examples of companies moving into the Metaverse can be observed most recently with Microsoft’s $67 billion acquisition of Blizzard-Activision which promises a new frontier in virtual gaming. Disney has also gone chips-in by announcing a launch of their own version of a Metaverse, as well as the Chinese e-commerce conglomerate Alibaba, despite Chinese government crackdowns on cryptocurrency, making a claim. While the Metaverse is currently not in the mainstream, there are already large communities that reside within these virtual worlds. Existing services such as VR chat and Avakin life seek to sate the need for community, contact and a freedom to express oneself without ties to reality. But if the Metaverse succeeds in bringing the inequality of the real world into the fun of the simulated one, by blocking users without sufficient funds out of access, it begs the question, why would anybody use it?

Only the future will tell whether Zuckerberg’s vision of the Metaverse will truly manifest. But while NFT buying and trading is touted as the future of finance, art, and now property, there is something missing here, something sinister. It is difficult to grasp why anybody would want to spend thousands, if not millions, on virtual items that have no real world benefit. It seems the only potential that most people see in buying such products is to turn a profit. The choice to invest into the Metaverse is a choice to disappear into the unreal, the simulated, to ignore a reality that is hurtling toward a climate crisis. The debate around the Metaverse will increasingly become less about the balance of a ‘real’ life against a simulated one, but rather whether there will be life at all. While Meta has vowed to meet zero-emissions by 2030, is that the same for every host of the Metaverse? Is that the same for every Metaverse citizen whose electricity is still reliant on fossil fuels? It is both a frightening and exhilarating feeling to be at the edge of a societal revolution. Yet despite futuristic adverts starring Matt Damon preaching that ‘fortune favours the brave’, in a world of cryptocurrency and garish scribbles of bored apes, one has to question: What is it all for? This move to constantly change society through virtual means bears little consideration to fixing the present. Rather than attempting to advance humanity in any tangible or egalitarian way, the only desire of these virtual prophets is to line their own pockets. If these innovators really want the future they yearn for so much, perhaps they should look to finishing their vegetables before moving onto their pixelated dessert.