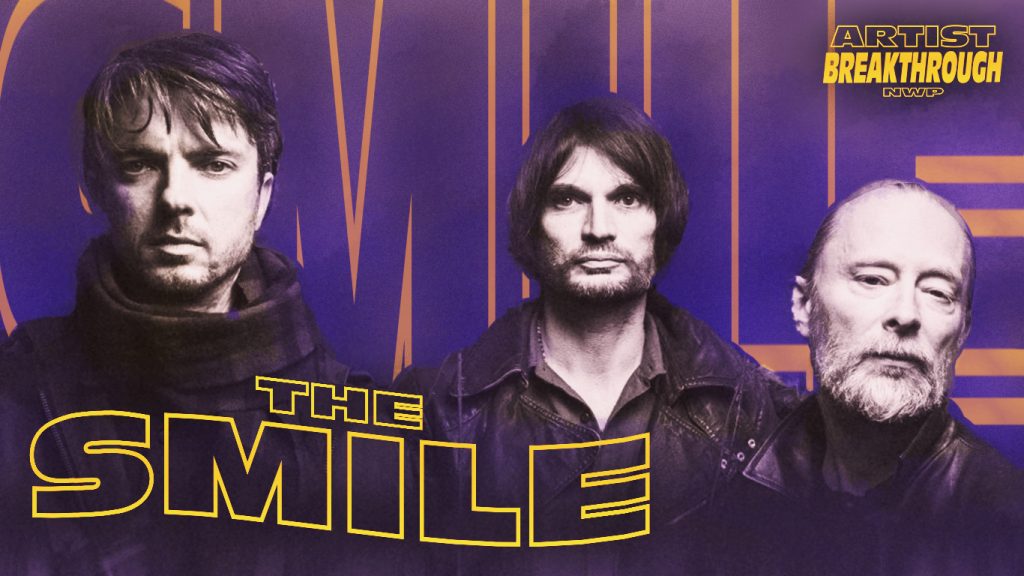 Here at NWP Artist Breakthrough, we are proud to cover the emergence of The Smile.

The Smile are an English rock band formed in 2020, by Radiohead members Thom Yorke and Jonny Greenwood, Sons of Kemet drummer Tom Skinner, and producer Nigel Godrich. Both bands have large followings already, and it came as a shock to fans when they made a surprise debut performance at Glastonbury’s Live at Worthy Farm livestream. The Smile went on to release 2 singles in January 2022: The Smoke, and You Will Never Work In Television Again.

We know the band are touring mid 2022, but their future plans are unknown. What we do know is, both Radiohead and Sons of Kemet devotees cannot get enough of The Smile, so read on to find out more!

The Smile, according to Jonny Greenwood, started due to his desire to work with Yorke during the lockdown, ‘we just wanted to finish some songs together’, he tells NME. They teamed up with Tom Skinner, and of course producer Nigel Godrich, who has worked with Radiohead since 1994.

Alex Young (2021) of Consequence Sound pointed out that The Smile incorporate elements of ‘post-punk, proto-punk, and math rock’ into their music, which Radiohead fans haven’t heard since Hail To The Thief (2003). After their release of ‘The Bends’ (1995), Radiohead began to purposefully change their sound from guitar-driven alt rock to a more experimental textured style. As fans are patiently waiting for another Radiohead album, many are pleased to hear The Smile’s noisy, nostalgic, guitar-centric style.

The name, The Smile, came from a poem: ‘The Smile’ by Ted Hughes. Thom Yorke introduced the band at Glastonbury stating: ‘Ladies and Gentlemen, we are called The Smile. Not the smile as in ahh, more like the smile as in, the guy who lies to you every day’.

The Smile performed three shows to a live audience between January 29th – 30th which were also livestreamed. I am very lucky to have attended their final performance which happened at 11am on Sunday, only hours after their show on the previous night. Atmosphere struck instantly upon entering the venue in single file, COVID appropriate lines. We walked alongside the circular stage as we were guided to our seats, and I couldn’t help but peer over to see countless amps, synths, guitars, cameras, and mics. The combination of dreamlike blue LED lights and DJ Zakia Sewell’s electrifying playlists created a captivating aura as we waited patiently for the show to begin. 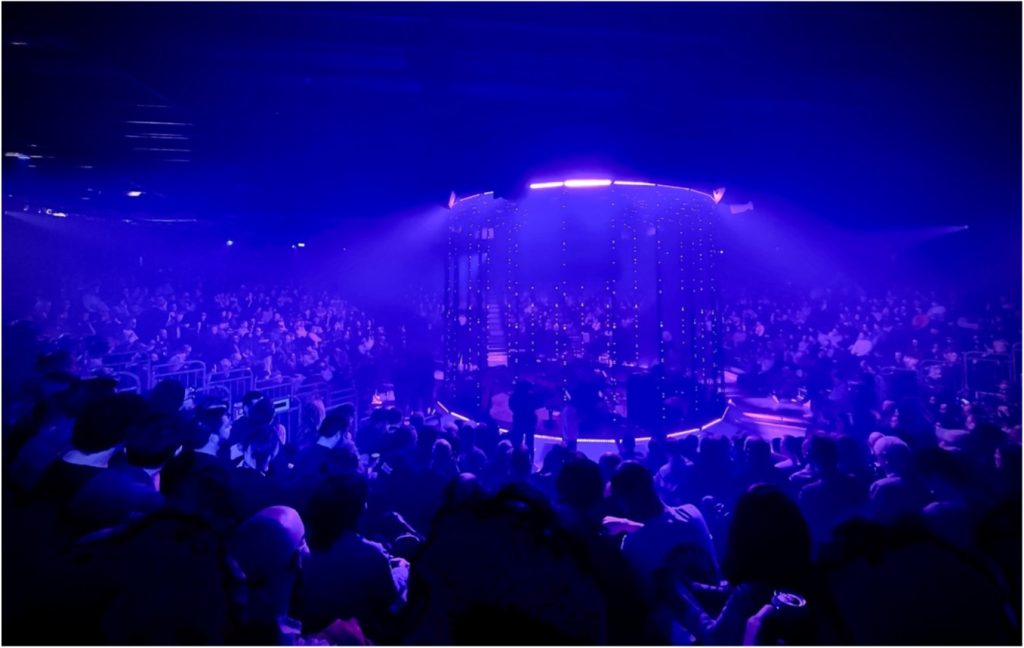 A sinister voice recites ‘The Smile’ by William Blake … ‘There is a Smile of Love, And there is a Smile of Deceit’ … as the trio walk onto the stage. Yorke begins the unreleased track ‘Pana-Vision’ with an ominous piano line and his signature falsetto voice, as the band begin to breathe into the song with growing layers of drums and bass.

They weave into track two, ‘The Smoke’, a slightly more upbeat turn with lyrics referring to the earth’s current state and climate change. ‘Set myself on fire’ could be a reference to the Buddhist Monk that set himself on fire to protest the Vietnam war. The lights gleam a bold red, and the repetitive bassline drives home the theme of the song. 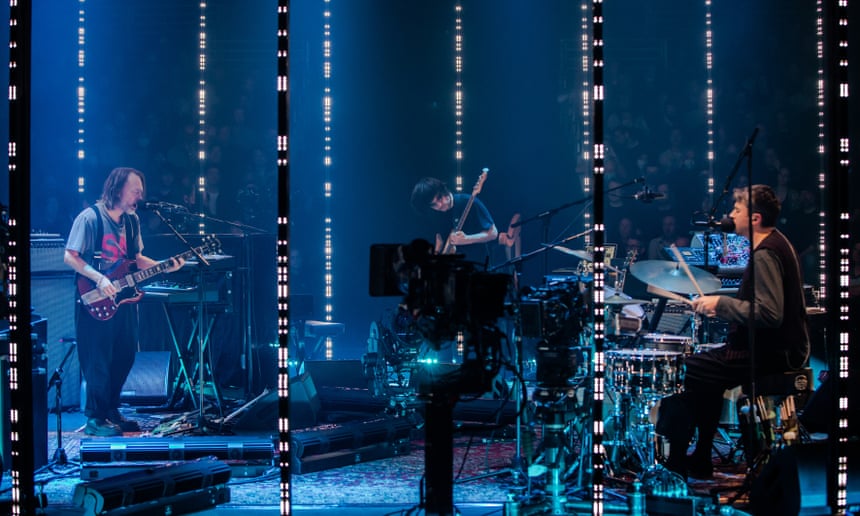 Track three, ‘Speech Bubbles’, began with Thom’s vocals accompanied with hazy detuned synth chords and distant drumbeats. The song falls into a minor guitar pattern with poignant, flickering synth parts. Chilled but slightly unnerving, this was my favourite on the setlist. I especially appreciated when Jonny – half human, half music machine – subtly floated away from the synths and began playing the piano with one hand, and the harp with the other.

‘Thin Thing’ was the fourth track, and the final one I’ll mention, unexpectedly swerved away from dreamy track three. They instantly filled the venue with jolting, rapid beats; crunchy, noisy guitar; and of course, vocoders. The track progresses as they bounce between time signatures and layer different sounds and sections – all contributing to its ever-growing intensity. ‘Thin Thing’ was an exhilarating experience to say the least.

The performance was incredible, and I was lucky to watch the livestream too. It’s great to see Yorke and Greenwood reconnect with a style that’s reminiscent of their previous works, especially when complimented with Tom Skinner’s skilful, jazz-like rhythms. Their sound was grounded through traditional instrumentation whilst remaining tastefully experimental with decorative synths and effects. 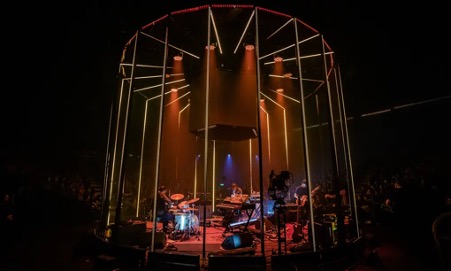 Luckily, if you didn’t catch the performance or livestream, The Smile have announced a 2022 tour.

On the 1st of February 2020, The Smile announced a European tour to begin in May.

It’s exciting to feature bands like this at Artist Breakthrough, as we can report on the very beginning of something great. We have no idea what The Smile are going to do next – so much so that I can’t even provide future release dates or plans. We will just have to stay connected to see what happens next.

Of course, fans ponder the question: when will they release the album? The livestream was only available to view for a few days after the event, so those that missed it won’t be able to hear their unreleased tracks. Can fans wait until after their tour later this year?

Have you listened to The Smile yet? What do you think?