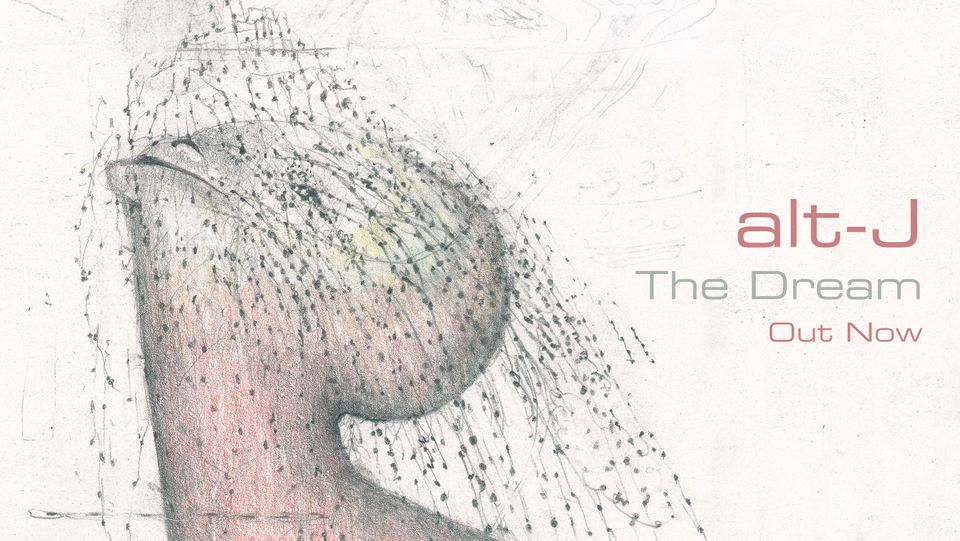 The Dream is the fourth studio album from British indie-rock band Alt-J.

Formed in Leeds in 2007, the group’s debut album was released in 2012, going on to win a Mercury Prize. Since then, their success has continued with their second album going straight to no.1 in 2014 and their third album also being nominated for a Mercury Prize.

Known for work that can get quite dark at times, the band often reference historic events or popular culture in their work, and this album is no different. The Dream does get dark and doesn’t shy away from difficult topics, from losing a loved one in the pandemic, cryptocurrency, and true crime, as well as references to history and pop culture.

The album kicks off with Bane, a track about addiction to fizzy drinks, partially inspired by a dream lead singer, Joe Newman, had about ‘swimming in coca cola’ – an intense and highly experimental track that sounds like 3 different songs in 1.

Followed by the first single of the album, U&ME. Written before the pandemic, U&ME is definitely one of the lighter songs on the album with a touch of the signature Alt-J strangeness. In an interview with The Independent, Newman describes his experience at an Australian festival that inspired the track in which he somehow bought a ‘round of kimonos for everyone’, referenced in the song itself, ‘Round of kimonos for my girls in the sun / Sending videos to friends in London’. The song is a fun and catchy indie-rock hit about togetherness and having a good time, taking listeners back to times before the pandemic.

Even catchier and tackling a somewhat controversial subject Hard Drive Gold is the second single on the album, commenting on the cryptocurrency fad. Written at what was thought to be the height of the crypto ‘gold-rush’ after drummer Thom Green found himself on a cryptocurrency Reddit page in 2020, the song is the story of a teenage boy becoming an overnight millionaire and the interactions he has with people, ‘I’m fifteen in my garden skipping / My neighbour Sue is watching me from her window / Oh, mama, did you tell Sue I’m a millionaire now, baby?’
It’s a catchy tongue-in-cheek song that’s open to interpretation, paired with a music video that, following the band’s tradition, is more of a short film. Directed by Newman’s partner, the video for Hard Drive Gold tells a completely different story to the song itself; of an athlete using her last four minutes alive and her deceased mother’s ashes to perfect a pole vault jump. An interesting choice considering the story of the song perhaps had a lot of potential as a short film too, this music video is also a hint of the darker turn the album takes from here.

Happier When You’re Gone is a reference to the Jimi Hendrix song ‘Hey Joe’, a song about a man who shoots his cheating lover. Happier When You’re Gone tells the other side of this story; to Apple Music, Newman explains ‘it’s the other side of the story from ‘Hey Joe’, the Jimi Hendrix song. Instead of Joe going to shoot his old lady, the old lady is saying, “I’m tired of your shit. I’m tired of your temper. I’m tired of this domestic hell that I live in.”’. An emotional and stripped back song that tells a story of domestic violence and feeling extremely unhappy at home, ‘It’s not easy, it’s not easy / Homelessness at home / My life is bracing for your hug’. Alt-J excel at storytelling and weaving in the emotion of the characters they sing about, and it shows in this song in particular, turning the original song on its head and telling instead of how the ‘old lady’ confronts her abuser. One of my personal favourites of the album, the lyrics, though dark, are emotionally evocative and musically it weaves the influences of West Texas and Jimi Hendrix with Alt-J’s signature sound into an almost country-rock sounding ballad.

As a total contrast, Get Better, though still a song about death, is filled with love and affection. A ballad about the grief of losing a loved one, Get Better is arguably the most emotional song on the album, so much so that it brought the rest of the band to tears the first time they heard it. And, though fictitious, Get Better is the most direct and emotionally honest song on the album, self-described by the band as more of a poem. An apt description as musically the song is very stripped back, just Newman and an acoustic guitar, it packs a huge punch emotionally. A tough listen for some, Get Better is a beautiful ode to grief and missing someone when they’re gone, ‘I still pretend you’re only out of sight in another room / Smiling at your phone’.

The dark themes and lyrics continue with songs The Actor and Losing My Mind, individually inspired by the singer’s interest in true crime podcast My Favourite Murder over the pandemic and the tragic murder of his friend’s sister in childhood. The Actor is a reference to the notorious Chateau Marmont Hotel in LA and an imagined retelling of the tragic death of John Belushi, with a Hotel California vibe. Losing My Mind is possibly the darkest song on the album, looking into the mind of a serial killer, a haunting and slow, reminiscent of Where Is My Mind by The Pixies.

A very experimental album that still holds on to the signature Alt-J sound, the darkness of some of the songs may be too much for some, but The Dream is an enjoyable indie rock album with strong storytelling and a great sound.