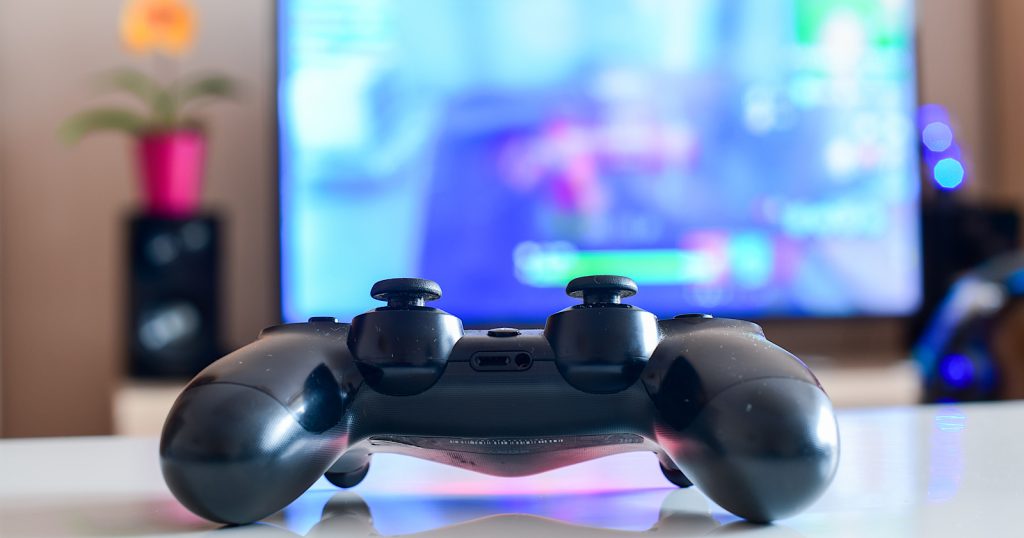 Welcome to Strangest Speedruns: Part Two. Reading the first part is not essential to understanding this article, but if you’ve got the time, why not check it out here.

Today’s focus will be on a select few of the “shortest” speedruns out there. Runs that will make beating Super Mario Bros. in 4:54 seem like a marathon to sit through.

For the benefit of those who have not read the previous installment – or if you just fancy a refresher course on the subject – we will recap what a speedrun is, and a handy ‘Speedrunner’s Index’ will be below to (hopefully!) help with the jargon.

A speedrun is a play-through of a video game or a selected part of it (such as a single level or world), performed with the goal of achieving completion as quickly as possible. The player with the fastest time in any given category, e.g. collecting all 120 stars in Super Mario 64, is known as the world-record holder for that category. Speedrun categories can also extend to the completion of an objective rather than a level, such as ‘find the key’ or ‘kill 20 monsters’.

‘Any%’ – The most common speedrun category, only requiring players to complete the game as fast as possible, disregarding special conditions such as non-essential item collection.

‘Out-of-bounds’ – Any area within a game that was not intended to be accessed by players, or at least was made to be inaccessible until certain progression within the game was made.

‘High-dynamic-range rendering’ (HDR) – The real-time rendering and display of virtual environments. It is used in computer, gaming and entertainment technology.

‘(Theoretical) Limit’ – When a particular game cannot be played any faster, due to how it runs/was programmed. Limits are usually branded as theoretical, as the possibility of a new time-saving skip or exploit of some kind has not yet been ruled out.

House of Caravan – Any%

House of Caravan is a first-person adventure game that takes place in a single mansion in Candlewood, northeast USA, and tasks the player with completing puzzles in order to escape the mansion.

At least, that’s what is usually required of the player.

Interacting with objects in the game in a standard way, will produce standard results. But players found that if you hold an item and look down, an interesting game mechanic comes into play. Doing so causes the player to be suspended in the air, and ultimately sends them out-of-bounds.

The Graveyard is a 2008 computer art game by Tale of Tales. Assuming the role of an elderly woman, players walk through a graveyard in order to find a bench to sit on. Once there, the woman recounts the deaths of those she cared about, eventually dying herself of natural causes, thus ending the game. If players choose to interrupt the cutscene and leave the bench before the music ends, the elderly woman survives, and players can leave the graveyard, thereby triggering the “good ending”.

The shortest speedruns for this game involve exiting the graveyard, but not by interrupting the depressing cutscene. Since the act of exiting the graveyard is what ultimately triggers the ending of the game (in the case of the good ending, at least), players realised that if they simply walk backwards at the very start of the game, the game will end in seconds. This is due to the game beginning just inside the graveyard, with the entrance to it still in view.

Released as an additional level for Half-Life 2, Lost Coast also served as a tech demo to showcase the source engine’s high-dynamic-range rendering.

Despite being an extra level for the main game, categories for speedrunning Lost Coast exist separately on various speedrunning websites, and those websites count Lost Coast as its own game.

The world record runs here come from an exploitation of the game’s physics.

Players start the game with an RPG. If shot at a specific boulder from close-range, players will maintain the velocity from the shot, and be propelled into the air. With the right placement, and knowledge of the level’s layout, players can send themselves right up to the metal box above, which marks the end of the level, and thus the end of the game.

Not including loading times, players have dropped the record to under 4 seconds, with ‘raintnt’ holding the record of 3.795 seconds since June 2016. With the record standing unbeaten for so long, and not yet tied, it begs the question of whether or not the speedrun has reached its theoretical ‘limit’.

Before there was discourse surrounding their footwear, the M&M’s were putting pedal to the metal.

The fifth video game in the M&MCU was a typical kart-racer, albeit a loud, awful, critically panned one. Players take control of one of the M&M’s, customise their vehicles, and then take to the track in one of 15 varying race environments. There’s a pre-race turbo boost. There are collectables. Pretty standard stuff for a kart-racer.

The game however, was seemingly never play-tested, leading to bugs, crashes, and various collision issues.

But one man’s trash is a speedrunner’s treasure.

Players discovered that tilting your kart into a specific wall on the track ‘The House’, will instantly crash the game, seemingly without fail. No rhyme or reason was given as to why this happens – no doubt one of many oversights by the developers – but speedrunners took it upon themselves to see how fast they could reach this crash point.

This endeavor eventually blossomed within the small community, into ‘Crash%’, or ‘Crash The Game’. 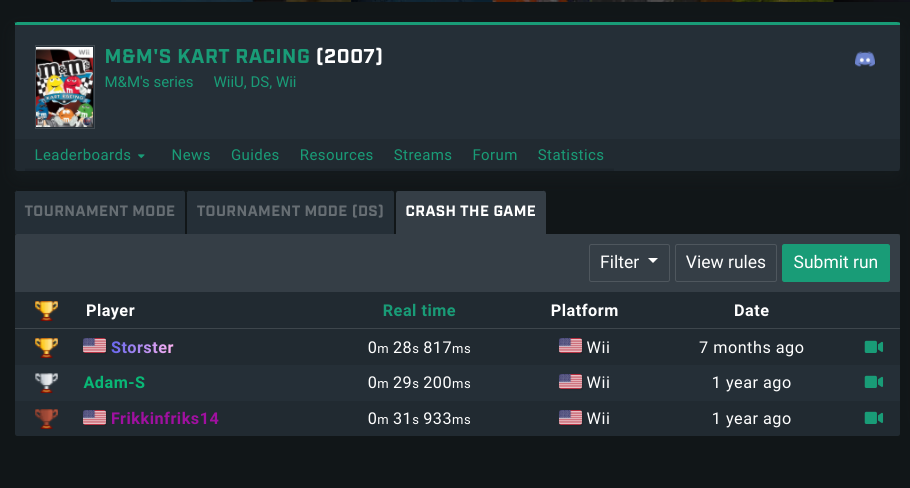 YouTuber ‘Storster’ currently holds the world record, crashing the game in 28.817 seconds in mid-2021. While more speedrunners are focused on improving the more tame ‘Tournament’ record, here’s hoping Crash% sees some traction in the near future.

All records correct and up-to-date at time of writing.