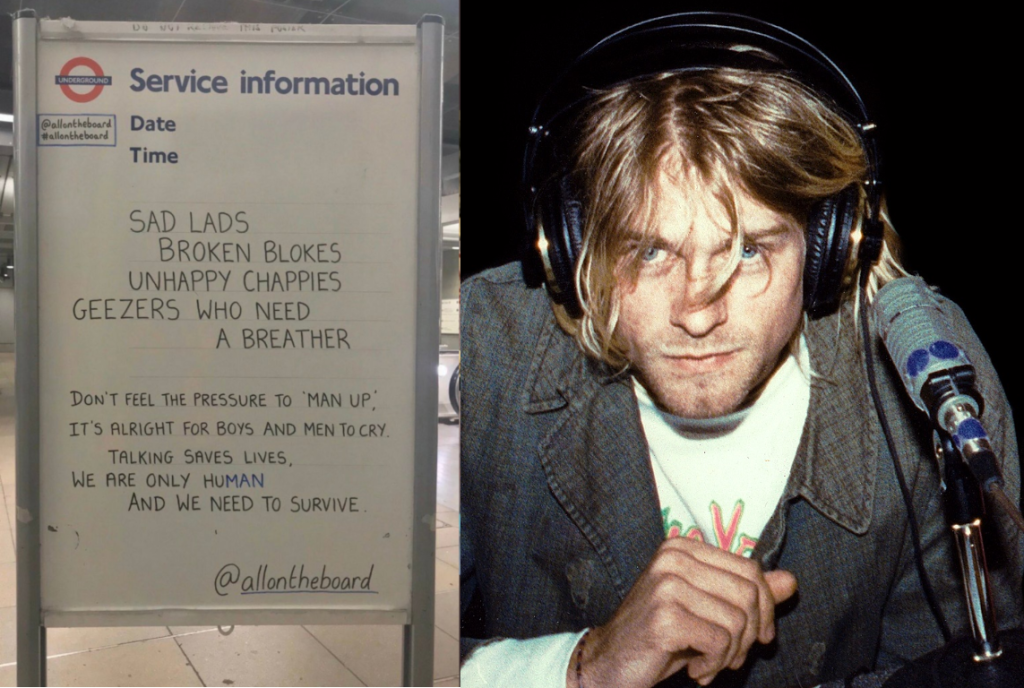 All On the Board is a project run by two Transport for London employees, Ian Redpath and Jeremy Chopra, which leaves kind and positive messages on service information boards around London train stations. I don’t live in London, so I haven’t encountered them in the wild, but their works are often shared online. They’re fairly harmless, if a little saccharine for my taste, except for one board that was shared extensively around social media towards the end of 2020.

The message argued that men shouldn’t feel pressured to ‘man up’, and that it’s “alright for men and boys to cry”. As a man who has lived with mental illness for much of his life, it isn’t exactly a message I should have a problem with. On some level, I can appreciate the positive impact that it might have on a male commuter who’s struggling with something. But the board also included phrases such as “unhappy chappies” and, my personal favourite, “geezers who need a breather”. It’s a colloquial and informal way to describe and address men struggling with their mental health. It’s also, in my opinion, horribly misjudged and representative of a wider issue.

It’s a message board in a tube station – but considering that three-quarters of all recorded suicides in the UK since the 1990s have been men, I don’t think using terms like “unhappy chappy” and “broken bloke” is in good taste. Those descriptors make out that men suffering from mental illness are simply lads who are sad or geezers who need a breather. It isn’t really a helpful way to reach out to people struggling with serious mental health problems. Imagine a man travelling home from work, from a job he hates in the middle of a global pandemic, who’s dealing – probably silently – with deep-set feelings and issues that could lead to him being one of the 5000 people in the UK who killed themselves in 2020. I can’t imagine reading a board where he’s described as “broken”, or made to feel like he just needs a breather, is really going to help his mental state or his perception of the problems he’s struggling with. 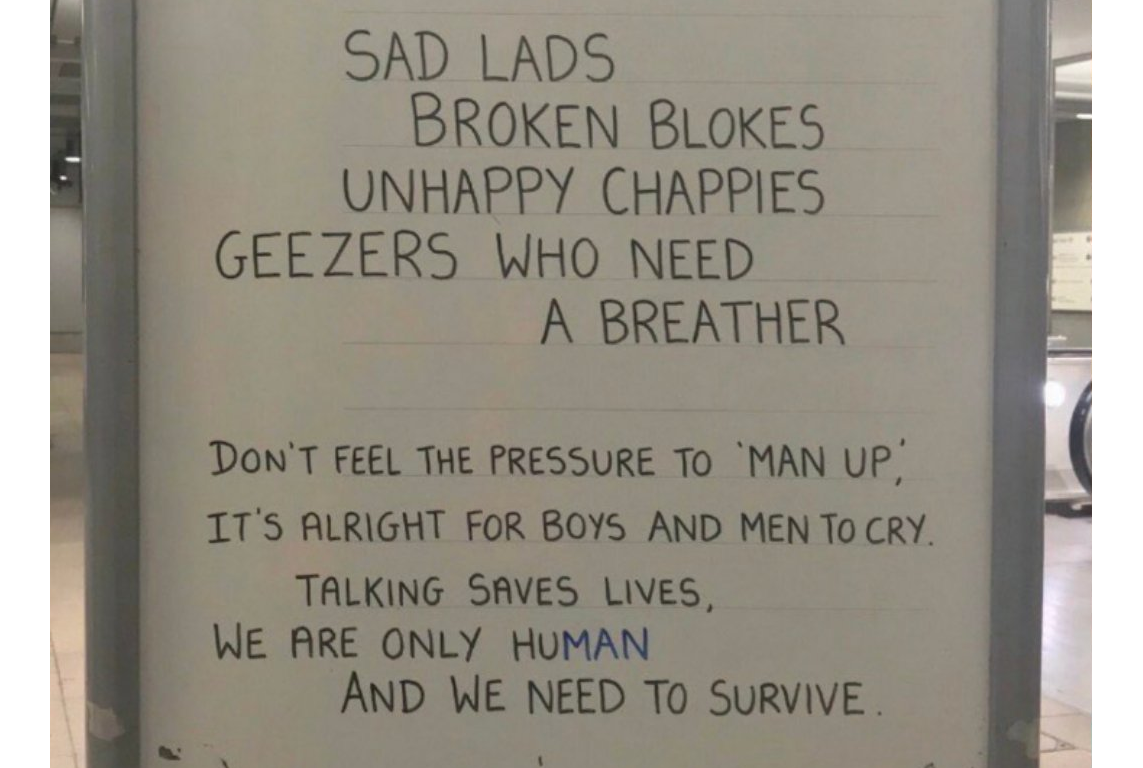 It reads, to me, as infantilising the issue. The concept of men struggling with mental health problems, or even feeling emotions at all other than hungry and horny, is relatively new for a lot of people. It can make them uncomfortable. Men are encouraged to suppress emotions, and for everyone certain emotions are taught to be negative when they’re simply the human way of reacting to something. Middle-aged men suffer from the highest rates of suicide across the board, and it’s no coincidence that they are the last generation raised under the authoritarian ruleset that men don’t cry. We don’t like grief, or sadness, or feeling scared. Men are taught, by parental figures and peers and the media, that emotions like these are weak – ignoring the fact that these are basic human feelings, and suppressing them directly leads to mental illness and low self-esteem.

Men are statistically far more likely than women to sleep rough and develop addictions to drugs and alcohol. The idea that a man could be on the receiving end of an abusive relationship is laughable to some. The reduction of male mental illness is rooted in the idea that women are emotional and men are logical, women are abused and men are abusers. A woman who has daddy issues was victimised by her father; a man who has mummy issues just resents his mother by virtue of her being a woman. A man can’t struggle with his mental health because he’s always in a position of power, and that power is always being utilised for personal gain. Remember when fears were drummed up around possible shootings at cinemas showing Joker, a movie principally about a poor white man struggling with mental illness? Give me a break.

In efforts to ‘appeal to men’, discussions around male mental health tend to repackage and reiterate the idea that men are naturally strong and their problems are insignificant. That lad culture, having a nice cold one with the boys, is the inherent way in which men act and form friendships. Attempts to encourage men to be more open about their feelings will still represent them as tough guys. As geezers who simply need a breather. Reminder – three quarters of suicides in the UK are men.

Here’s a revolutionary idea. Stop acting like men and women are different and treat everyone’s mental health with the same tone of voice.

Everyone knows that Kurt Cobain committed suicide, but no-one is invited to reflect on that. His feelings and reasons are speculated about, but it doesn’t take a genius to realise he was probably struggling with his mental health. Nobody stops to think that Cobain, for all his controversial sensitivity, wasn’t so much as making a political point as he was trying to be honest about how he felt. A man being emotional (without being angry) is unnerving. Cobain’s put into the category of tortured artist – but at least Amy Winehouse and Sylvia Plath receive honest appraisals for why they’re considered tortured. He wasn’t simply a wild child, and he didn’t just live the rock-and-roll lifestyle until the end; Cobain’s parents divorced when he was a child, and he witnessed his mother suffer domestic abuse at the hands of her new partner. He failed school and was kicked out of home. It’s not hard to see he wasn’t the image of a rockstar, nor was he a geezer who needed a breather. Pull the other one.