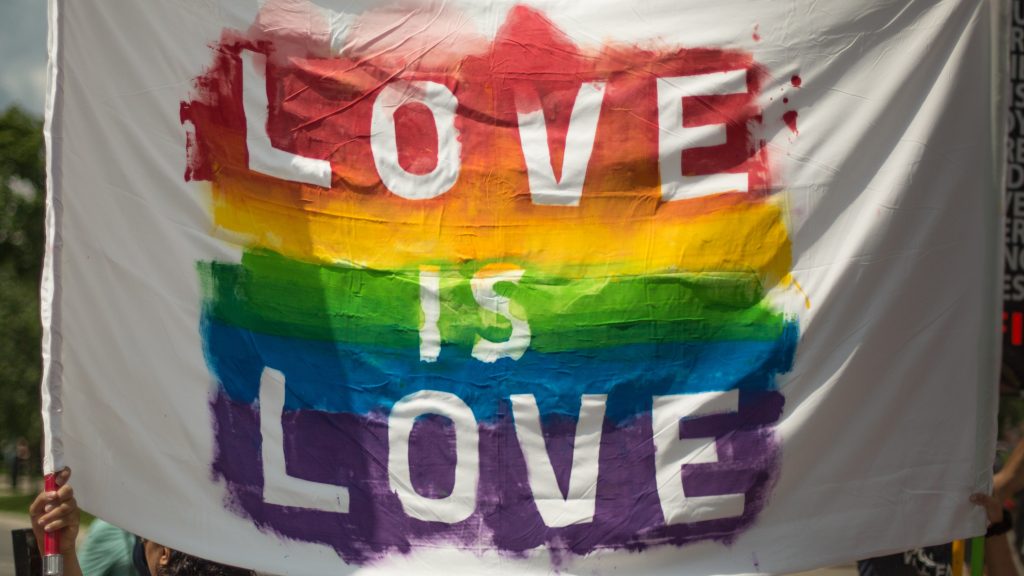 On the 2nd of February 1988, the peers in the House of Lords voted in favour of a new bill. They were politely celebrating this bill when ropes fell from the balcony of the public viewing area. Suddenly, chaos and amazement ensued as several women abseiled down onto the floor of the House. The bill that the Lords voted into law, and that the activists protested against, was Section 28. This law stifled LGBT support and education for over a decade, and arguably still has an effect to this day.

Section 28 – also known as Clause 28 – was in effect from 1988 to 2003. It prohibited local authorities from promoting homosexuality or promoting “the teaching in any maintained school of the acceptability of homosexuality as a pretended family relationship”. It may seem ridiculous that such a law could have been made, but it’s important to understand how gay people were viewed in 1980s UK.

What was life like for gay people in the 1980s?

There had been great social change in the last couple of decades. Abortion was legalised, it was easier to get a divorce, and in 1967 homosexuality was partially decriminalised. However, this didn’t make the UK a golden land of equality. The 1967 Sexual Offences Act only applied to England and Wales. Gay sex wasn’t decriminalised in Scotland and Northern Ireland until 1980 and 1982 respectively. The age of same-sex consent was 21, whereas the age of opposite-sex consent was 16. While gay men over 21 could have sex – lesbian sex had never been illegal – it could only occur in private spaces, and the law took on a very draconian definition of “private” – in a person’s own home, with nobody else in the house, behind closed curtains and locked doors. Prosecutions for gross indecency between men actually tripled in the decade following the enactment of the law. These unfair laws further othered gay people and were a result of the belief that being gay was a perversion, and that gay men posed a threat to young boys. Still, despite the inequalities of the law, it did allow gay people to more easily meet up and form groups, which led to increased gay activism in the 1970s. The 1980s saw the rise of the HIV/AIDS epidemic, which further stigmatised gay men, as HIV and AIDS were seen as a “gay disease”. Even though conditions for gay people had improved in some ways, it was still difficult to be gay in 1980s UK. While these social conditions factored into the introduction of Section 28, it may surprise you to find out that the main catalyst that led to the law was a children’s book.

That time politicians got worked up over a children’s book

Jenny lives with Eric and Martin, which was originally published in Denmark, is about the daily life of a young girl living with her two dads. Its limited release in the UK caused massive uproar with many public figures decrying the book as promoting homosexuality to children. Viscount Buckmaster, a member of the House of Lords, said that the book includes “two homosexual men naked in bed with the daughter of one of them between them. Can there be anything more repulsive than that?” (He may be referring to a part of the book where Jenny, Eric and Martin have breakfast in bed, where Eric and Martin are shirtless. The reader doesn’t see if the rest of them is naked.) The moral outrage was because the book was made available in a school library in London, although in reality the book was only available for teachers to use in exceptional circumstances. That bit of reality didn’t stop the press, with the Daily Mail running the headline “Save the Children from Sad, Sordid Sex Lessons” on the 5th of June 1986, as well as a later article about “courses on homosexuality and lesbianism for all pupils from nursery schools to further education”. Appeals to protecting children have been and continue to be used to maintain bigotry and ignorance. There was a prevailing idea – that many people still hold today – that being gay was more sexual than being straight and that it was too much for a child’s mind to handle.

The proposal of Section 28

The act that would become Section 28 was proposed in 1986 by the peer Lord Halsbury, who had some choice things to say about gay people, including that they were “reservoirs of venereal disease” (think back to the stigma of the AIDS epidemic). Like many people at the time, he didn’t see lesbians as a threat, as, in his words, “they do not molest little girls” or “indulge in disgusting and unnatural acts like buggery”. Speaking at a 1987 conference, Margaret Thatcher said that “children who need to be taught to respect traditional moral values are being taught that they have the inalienable right to be gay” and that these “children are being cheated of a sound start in life – yes, cheated!” The promotion of Section 28 led to increased awareness of the gay community, but not in a good way. According to the British Social Attitudes survey, homophobic sentiment peaked in 1987, where 75% of people surveyed believed that homosexuality was “always or mostly wrong”.

Despite the rampant homophobia at the time, there were still many protests against Section 28. Groups sprung up across the UK to fight the proposed law. OLGA (Organisation for Lesbian and Gay Action) was founded in 1987 and organised Stop the Clause rallies, with the first one on the 9th of January 1988 being attended by at least 10000 people. Celebrities also spoke out, with one of the most well-known being Ian McKellen, who came out publicly in 1988 during a debate on Radio 3. McKellen was horrified of the implications of Section 28 and said during the debate that the Clause was “offensive to anyone who’s, like myself, homosexual, apart from the whole business of what can and cannot be taught to children.” McKellen would go on to be a founding member of Stonewall, which was founded as a response to the enactment of Section 28. I mentioned the abseil into the House of Lords earlier, but another famous protest was the storming of the Six O’Clock News by several lesbian activists. Two of them handcuffed themselves to equipment in the newsroom and one was sat on by presenter Nicholas Witchell, leading to headlines like “Beeb Man Sits on Lesbian” (The Daily Mirror) and “Loony Lezzies Attack TV Sue” (The Daily Star). Despite the backlash, Section 28 became law on the 24th of May 1988.

Nobody was ever actually prosecuted because of Section 28, but it still had a massive impact. This comes down to the vague wording of the law: local authorities could not “promote the teaching […] of homosexuality as a pretended family relationship”. The word promote is incredibly subjective – someone presenting being gay as anything other than wrong could be accused of promoting it. If a teacher helped a student stand up to homophobic bullying could be accused of promoting homosexuality. Most schools erred on the side of caution and overly censored themselves. This resulted in the removal of LGBT education from state schools, LGBT student support groups being closed, and teachers being reluctant to support students who were experiencing homophobic bullying. The effects of Section 28 went beyond schools, as the laws prohibited local authorities from “promoting homosexuality”. For example, this meant that libraries couldn’t stock LGBT books, and theatres that relied on council funding couldn’t perform shows with LGBT themes. Section 28 removed lifelines for queer people, and vital education for young people.

Attitudes towards gay people did soften a little through the 1990s and early 2000s. According to a 2003 survey, 31% of people thought that homosexuality was “always or mostly wrong”, as opposed to 75% in 1987. While things were by no means perfect, positive LGBT representation by way of celebrities and TV show characters had helped humanise the queer community. In 2000, another victory was achieved when the age of same-sex consent was lowered to 16, making it the same as the age of opposite-sex consent. For an increasing number of people, Section 28 looked like a relic of a bygone bigoted era. Scotland got rid of Section 28 in 2000, and the rest of the UK followed in 2003. That is, except for Kent County Council, who kept a similar law to “ensure that sex education values family and marriage as the foundation of a civilised society, and a firm basis for the nurturing of children” until 2010.

While homophobia is less visible today – most people in the public eye would not outright admit to being homophobic – it would be misleading to say that it’s been eradicated in the UK. In 2021 there were 3555 reported homophobic hate crimes, an increase of 21% from 2019. There has also been a worrying rise in homophobia outside the UK, with Russia introducing a law banning “propaganda of non-traditional sexual relationships” being shown to minors in 2013. It is worth noting that rhetoric that was used to justify homophobia is now also being used to justify transphobia. The idea that transgender people shouldn’t be allowed into single-sex spaces, including public toilets, is based on the idea that trans women pose a threat to cisgender women, which mirrors how gay men were presented as predators. Section 28 was partially justified on the idea that schoolchildren are too young to know about gay people. Similarly, the notion that young people shouldn’t know about transgender people is used to deny young trans people adequate support and healthcare. Section 28 may have been abolished nearly 20 years ago, but we shouldn’t forget about it, as its legacy reverberates throughout British society to this day.