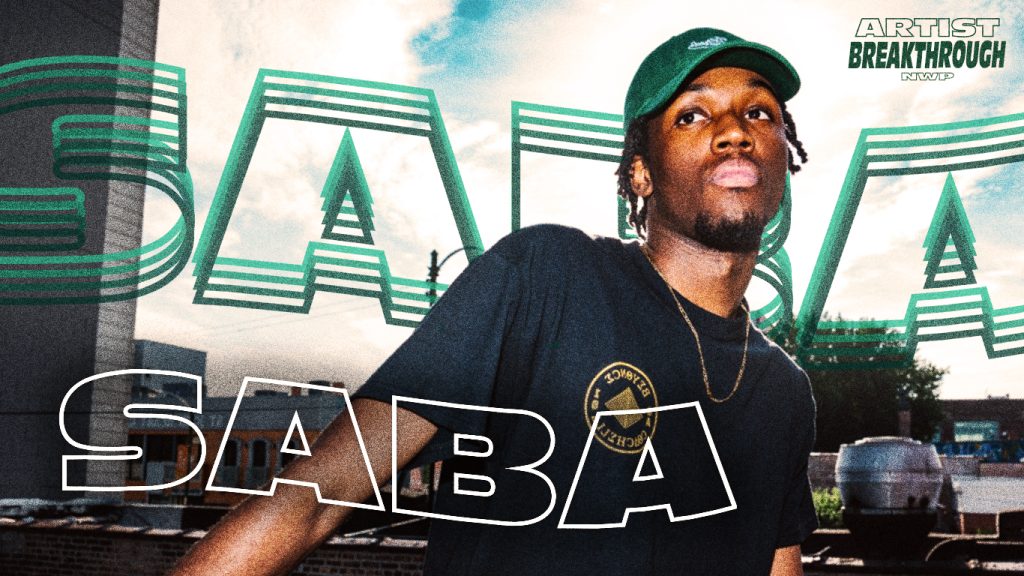 Here at Artist Breakthrough, we are excited to feature Chicago rapper and record producer Saba, and review his latest album, Few Good Things. Saba strung together his experience into a beautifully informative, reflective, and artistic album. It’s interesting to observe his growth as an artist, and in this article, we will explore his previous works all the way up to his recent release.

27-Year-Old Tahj Malik Chandler, better known as Saba, grew up on the west side of Chicago. Music has been central in his life from a very young age, he passed on his mixtapes in school hallways and began performing at age 16.

Saba officially released his first project GETCOMFORTable in 2012, a collaboration of performances from emerging Chicago artists making sense of the world in which they exist. Saba notably collaborated with Chance the Rapper on Everybody’s Something from his album Acid Rap, which significantly helped with his growth as an artist. Saba then went on to release his second mixtape, ComfortZone, in 2014.

Saba released his debut album Bucket List Project in 2016, which includes my personal fave Stoney, and GPS which features his father, Chandlar. The album features other well-known Chicago artists such as Noname, Akenya, Twista, and others. After releasing a range of singles, he went on to release his second album CARE FOR ME in 2018 – an album holding strong themes of grief and loneliness. The album was dedicated to his late cousin, Walter Long Jr., who was killed in 2017.

It’s important to note that Saba not only raps and produces, but he also co-founded hip-hop collective Pivot Gang with his brother Joseph Chilliams, their late cousin John Walt, and their high school friend MFn Melo. All their music can be downloaded for free, which members of the independent music movement happening in Chicago feel particularly strongly about. Saba is also one third of Ghetto Sage, a trio consisting of himself, Smino and Noname.

Saba has defiantly made his mark in the music scene so far, but his career is only just beginning. Saba released his third studio album, Few Good Things, in February 2022. Saba told Fader that he planned to release the album in Winter 2018, but held back after seeing that Care For Me was still reaching new listeners. After a much-needed break, half his doing, the other half due to COVID, he finally decided to release the album.

Free Samples, the first track, sets the tone with a lush instrumental to accompany Saba’s words about nostalgia, growth, and the struggles faced by people who live in his hometown. The reverberant nature of the track makes it sound like a dream, or a distant memory. The theme continues as it drops into track two, One Way or Every N***a with a Budget, with its retro sounding, reverberant production. Saba alludes to finally being able to enjoy the fruits of his labour, but it inevitably comes with a price. He comments on the racial housing inequality in the US, ‘All my neighbours lookin’ at us, lookin’ different than they family’, implying that he is one of the few black men that live in his expensive neighbourhood, which makes his white neighbours uncomfortable.

Survivor’s Guilt, switches from dreamy nostalgia into an intense trap beat, where Saba speaks about police brutality, his cousin Walter’s death, and living in poverty. He uses wordplay to exaggerate that ‘immature people don’t change’. ‘They armed and they dangerous’ … ‘They want us in boxes but can’t contain us.’ Due to Saba’s success, he feels responsible to help those that are suffering like he used to – they root for him. Saba artistically informs the world the story of the underrepresented, and through reaching success it’s clear that he still wants to stay loyal to his roots.

As annotated by Genius, An Interlude Called ‘Circus’, the short length of this track represents the theme: as we can’t predict how long life’s highs will be, we can’t let time go to waste. Fearmonger juxtaposes between the insecurities Saba feels now he has money, and how difficult it was for him (and is still for others) when in poverty. In the description of the music video, Saba states that the song assigns a character to his irrational fear: he created a sonic world, and by listening, you trust him to show you around his imagination. Reverting back to the nostalgic theme, Come My Way, explores the ’false’ statement that Saba believed at some point: once we get money, ‘then we’ll be good’. He speaks about the harsh reality of those that are poor, their primary focus is on work and survival, no time for rest.

The warm, syncopated instrumental in Still welcome feelings of desire. Saba, Smino, and 6LACK, reminisce about someone they’re still attached to. A Simpler Time continues the theme of reminiscing, with more syncopated beats and guitars. Featuring an alternate vocal style from Saba and a smooth, free-flowing feature from Mereba. I can’t help but be reminded of Kendrick’s To Pimp A Butterfly when listening to the chorus of Soldier, track nine. More nostalgic feelings as the lyrics weave in and out of the swelling instrumental, and another alternate vocal style from Saba really pulls the track together. If I Had A Dollar picks up the pace once again, holding themes of more mainstream hip hop – embracing failure, loss, and taking time.

In the music video description of Stop That, Saba wrote that ‘our own insecurities ring really loudly in our heads, to the point where we make ourselves smaller before giving anyone else the chance to.’ This track is about Saba noticing these feelings in himself and correcting them. The minimal, sinister style of beat match well with Saba’s rising self-assurance. A complete genre flip pulls us into track 12, Make Believe, that begins with a voicemail from his mother. The song beautifully cradles words about losing his friend to an overdose, sobriety, and reaching success as a black man. Saba talks about those he wanted to be proud of him no longer being here, and after experiencing his journey through the rest of the album, the tenderness of this track really touches your heart.

2012, sounds like another distant dream, the lyrics have a childlike charm, and are matched with a heart-warming guitar loop, swelling vocal accompaniments, and chirping birds. This one reminisces about childhood, and cleverly transitions into the last track, Few Good Things. This three-part track effortlessly summarises the album. Saba comes to terms with his feelings of responsibility; reflects on the struggles of growing up in the hood; still holds close those important to him; turns nothing into abundance; and reiterates the importance of black identity.

This is a truly beautiful album. Saba transparently and artistically paints a picture of his experience, and the experience of many. The album seamlessly drifts through themes of insecurity, inequality, experience, and political protest. Saba acts as a catalyst for the underrepresented, telling the world a story that often gets ignored. I think this album will speak to those who aren’t informed of these issues, whilst also holding relatability for those that experience them. Saba has announced a 2022 tour with tickets on sale now. If you don’t get a chance to see him live, Saba made sure that there is plenty of content to experience for free. Along with the album, Saba and Pivot Gang released Few Good Things (A Short Film) – a 25-minute-long cinematic short that features select tracks from the album along with various sounds of Chicago.

So, what did you think of Few Good Things? If you haven’t listened yet I would strongly recommend it. Stay tuned for more in-depth content about upcoming artists here at Artist Breakthrough.