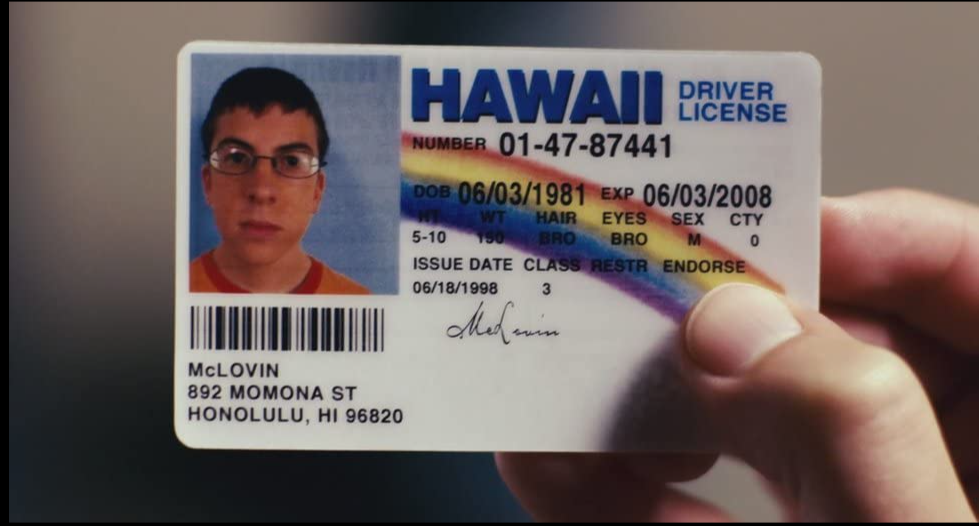 We’ve all got favourite films and film genres, so I thought it’d be fun to share some of my favourite comedy films. Now I will preface this article by saying comedy is very subjective so you may or may not agree with my choices considering I also have an awful sense of humour, but anyway, let’s have a look into my favourite films! Warning: spoilers ahead! 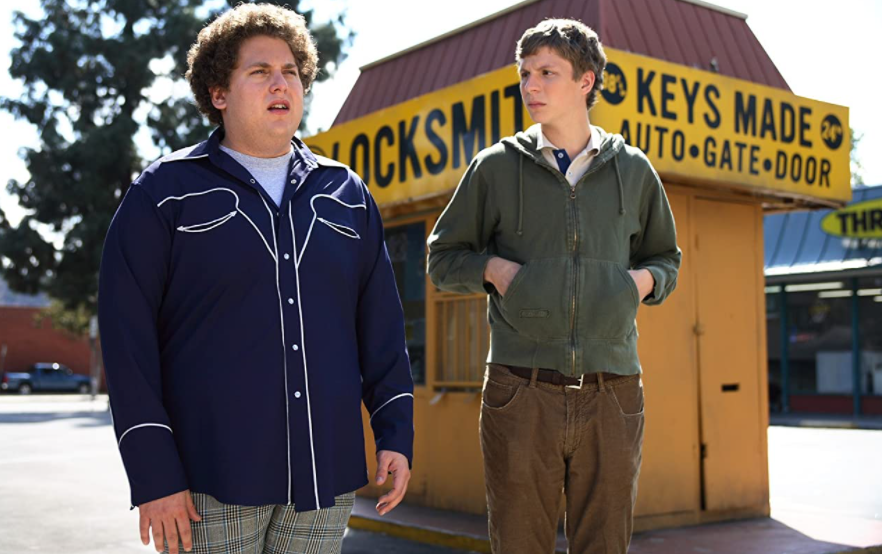 Superbad is a coming-of-age comedy released in 2007 directed by Greg Mottola. Two teens, Seth (Jonah Hill) and Evan (Michael Cera), plan to lose their virginities at a party before they graduate high school. Their friend Fogell/McLovin (Christopher Mintz-Plasse) gets caught by two police officers, Slater (Bill Hader) and Michaels (Seth Rogen), while using a fake ID to buy alcohol for the party, but instead of getting arrested, the officers agree to take him to the party. Evan and Seth argue about going to different colleges before Seth gets hit by a car, the same police car that Slater, Michaels, and Fogell are in, while Evan makes a run for it, Seth and Fogell escape with the alcohol. They finally get to the party where all three boys disappear with their crushes in hopes of fulfilling their original plan, but the party is shut down by Slater and Michaels before they can. Seth and Evan escape the party, but Fogell is caught by the officers, who explain that they knew he used a fake ID but just wanted to teach him that cops are fun too, making it up to him by ‘arresting’ him in front of the party-goers to make him seem “badass”. The film ends with Seth and Evan running into their crushes at the mall and apologising for the party.

I always go back to Superbad as a comfort movie and have watched it too many times to count. Michael Cera is great in it which prompted me to watch his earlier work in Arrested Development, which has now become my favourite TV show so far! 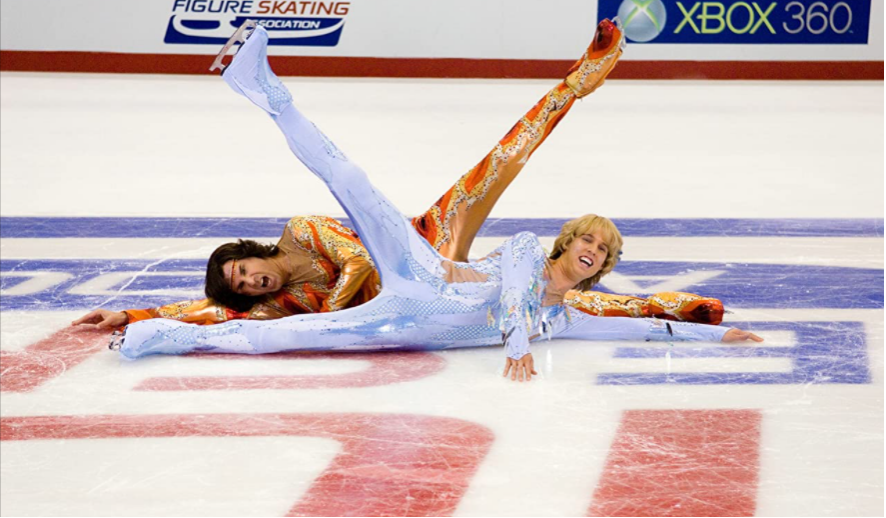 Blades of Glory is a 2007 sports comedy film directed by Will Speck and Josh Gordon. It follows two figure skaters, Chaz Michael Michaels (Will Ferrell) and Jimmy MacElroy (Jon Heder), who have been banned from competitions, but find a loophole where they can skate together and compete in the sport again. Their coach (Craig T. Nelson) says they must perform a move that’s never successfully been done before in order to win against their rival competitors, the Waldenbergs’ (Will Arnett, Amy Poehler, and Jenna Fischer). Fairchild and Stranz Waldenberg then kidnap Chaz and Jimmy to prevent them from taking part in the competition, however they escape, only for Chaz to break his ankle on the ice after Fairchild breaks and throws her pearl necklace onto it. This causes Chaz and Jimmy to switch their roles but still perfectly performing the stunt. The film ends with the Waldenbergs’ being arrested for cheating, and Chaz and Jimmy receiving the gold medal and flying off via rockets on their skates.

I ended up watching this film after I’d seen loads of Saturday Night Live sketches from the 90s and 00’s, most of which featured Will Ferrell and Amy Poehler. They’re both great on SNL so I knew Blades would be on par! 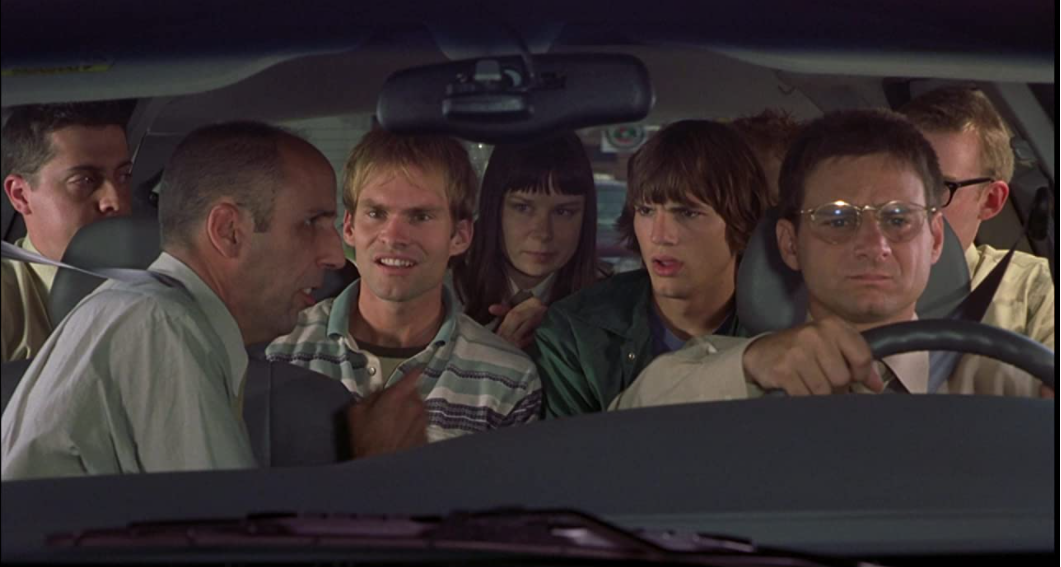 Dude, Where’s My Car? came out in 2000 and is a stoner comedy film. Best friends Jesse (Ashton Kutcher) and Chester (Seann William Scott) awaken hungover with no memory of the night before but find an angry message on their answering machine from their girlfriends. They leave their apartment to make amends but find the car is missing, prompting Jesse to ask “Dude, where’s my car?”. In search for the car, they meet different people who remind them of things they did the night before, as well as two separate groups of aliens who are searching for the “Continuum Transfunctioner”, an extra-terrestrial device the boys accidentally picked up. Once uncovering the clues about the device, they end up at an arcade where they try to pass off a toy as the Continuum Transfunctioner, but the real device is a Rubik’s Cube Chester had been trying to solve throughout. The cube then transforms into the real device with flashing lights that indicate the end of the universe, which one group of the aliens are able to solve, but the other group morph into a giantess. However, the device is equipped with another button which Chester is able to press thus exploding the giantess.

I watched Dude just a few days ago and fell in love with it all over again! It could be a little confusing to keep track of all the storylines but it’s the epitome of a stoner movie and is my favourite film on the list, so if you like those kinds of films I highly recommend this one! 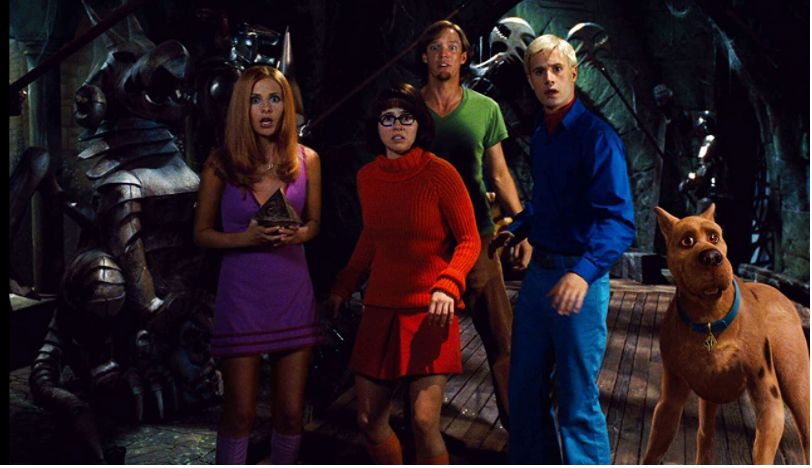 Scooby-Doo is a live-action, computer animated comedy film directed by Raja Gosnell, and based on the long-running animated television series, Scooby-Doo. Mystery Incorporated is a group of four adults and a talking dog who solve mysteries together and reunite after a two-year disbandment to uncover the mystery on a horror-themed island resort. Once on the island, the gang separate to look for clues involving the ancient demons that are plotting revenge after their ruling was displaced by the resort. The demons then kidnap and possess Fred (Freddie Prinze Jr.), Velma (Linda Cardellini), and Daphne (Sarah Michelle Gellar), but Shaggy (Mathew Lillard) stumbles across a pot of protoplasm containing the possessed souls of his friends, which he frees. Velma discovers that sunlight destroys the demons, and Daphne realises the demons will rule for another ten thousand years if they sacrifice a pure soul, the soul being Scooby. One of the demons attempts to extract Scooby’s soul but instead is crashed into by shaggy, thus releasing Scooby’s soul, while Fred and Velma discover the demon is actually a robot controlled by Scooby’s weird nephew Scrappy-Doo. Scrappy then absorbs the tourists’ souls and tries to kill the gang, as Daphne knocks over the pot of possessed souls and Shaggy fights Scrappy to free the rest of the souls. The demons and their minions are imprisoned, and the gang agree to keep solving mysteries together.

This film is a classic case of ‘it’s so bad it’s good’, the animation is outdated, the storyline is a bit confusing, and the acting is super overacted, but it holds a special place in my heart! I grew up watching the Scooby-Doo cartoons and remember being so excited to watch the live-action movie and never being disappointed! 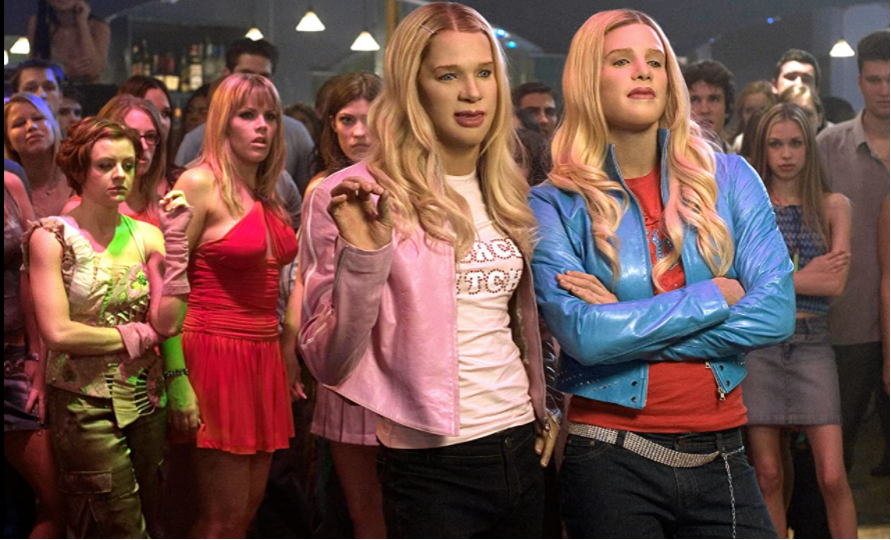 White Chicks is a 2004 comedy directed by Keenen Ivory Wayans. FBI agents and brothers Marcus (Marlon Wayans) and Kevin (Shawn Wayans) are sent to chauffeur the Wilson sisters at a weekend-long fashion event in the Hamptons after they fail to bust a drug deal. The sisters suffer minor facial scars due to a car accident and refuse to go to the event, causing Marcus and Kevin to go disguised as them in fear of losing their jobs. Under disguise, they accidentally meet with the sisters’ friends, take part in a dance-off with the sisters’ rivals, and enter a catwalk competition, where the real sisters have decided to take part in. They then unmask Marcus and Kevin, causing mass confusion between the audience and the Wilsons. The Wilsons’ father then explains he’s having financial troubles and has funnelled large sums of money through the charity fashion events, giving Marcus and Kevin reason to arrest him. The sisters’ friends come over to explain how they’ll miss Marcus and Kevin and that they liked Brittany and Tiffany a lot more when they were them, and the film ends with them all agreeing to go shopping.

This one may be controversial, but I personally love it! Every time it was on TV I’d watch it and now that it’s on Netflix I’m going to watch it again. I’ve also seen people say that the film is offensive to white people, I’m white and I personally don’t find it offensive to me at all, I think it’s a light-hearted film and if anything, I think it’s more of a mockery towards people who have done Blackface, a ‘taste of your own medicine’ type thing.

Thanks for reading! What are your favourite comedy films?